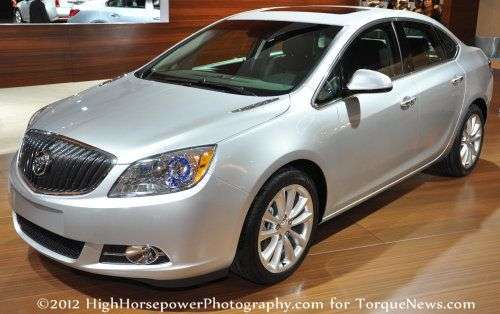 The sales results are in for August 2012 and for the folks at General Motors, it was a good month with all four of their existing brands showing positive growth – helping the largest of the Detroit Big 3 to beat out Nissan and BMW in terms of year over year growth.
Advertisement

In August 2012, General Motors sold 240,520 cars, trucks, vans and SUVs in the US market. This figure represents an increase of 10.1% over the same month last year and while GM fell short of their cross town competition in terms of growth – these 240,520 vehicles sold makes GM the bestselling automaker in the United States. Best of all, each of the four GM brands showed positive growth in August 2012.

The top performer from General Motors in terms of year over year growth was, somewhat surprisingly, Buick. It has been a very up and down year for the affordable luxury brand but the massive success of the new Buick Verano (shown on the right) has helped the brand show significant growth even though the other models in the lineup are struggling right now. In fact, only the Buick LaCrosse showed positive growth (up 3%) among those models that existed last August (the Verano was not around in August 2011). In addition to being the only vehicle to show positive growth, the LaCrosse also led the Buick brand in sales volume with 5,593 large sedans sold in August. The aforementioned Verano was second in sales with 5,200 units sold and the Enclave SUV was third in sales with 5,125 units sold. It has been quite some time since Buick had a legitimate player in the compact market but early sales indicate that the Verano is the real deal – and a big hit for Buick.

General Motors had a tie for second in terms of growth with both Chevrolet and Cadillac posting improvements of 11.3% in August 2012. Since Chevrolet sold a whopping 169,978 vehicles (making them the second bestselling single brand in the US), we will look at Chevy first.

In August 2012, Chevrolet had a very strong month with almost all of their vehicles showing growth from last August. Sales growth was led by the Chevrolet Volt which improved by an incredible 837.4% as the Volt secures itself as the bestselling electric vehicle in the US. The Chevrolet Caprice police vehicle was second in growth with an increase of 260% but in terms of consumer vehicles, the Volt was followed by the Colorado pickup (up 66.8%) and the high performance Chevrolet Corvette (up 29.3%). The top model from Chevrolet in terms of sales volume was the Silverado pickup family with 38,295 vehicles sold but in second place was the Chevy Cruze 25,975 examples of the compact sedan sold in August. Rounding out the top three in Chevy sales was the Equinox compact SUV with 20,231 units sold. In addition to having strong sales and growth numbers in August, Chevrolet saw some other important figures including the Camaro outselling the Ford Mustang for the first time in 4 months along with the continued domination of the EV market by the Chevy Volt. Right now, the Volt has a lead in the segment that will likely be impossible for the Nissan Leaf to overcome while the Chevrolet Camaro hangs onto a narrow lead in annual sales as the Chevy muscle car tries to lead that segment for the third year in a row.

Also posting a gain of 11.3% in August 2012 was the Cadillac brand, which benefitted greatly from the rapid growth in popularity of the new XTS flagship luxury sedan. After just a few months on the market, the XTS has already grown to become Cadillac’s third bestselling vehicle with 2,158 units sold in August. Cadillac was led in sales by the SRX with 5,203 SUVs sold followed by the CTS family in second place with 5,136 sedans, coupes and sport wagons sold last month. In terms of growth, the top dog from Cadillac in terms of growth was the Escalade, which saw sales improve by 14.4% over the same month last year. The larger Escalade ESV was second in growth with a jump of 13.3% while the SRX was third with a gain of 12.4%. In addition to the steady incline of XTS sales, Cadillac can also expect a jump in their figures once the compact ATS Sport Sedan arrives in dealerships later this year.

GMC was the weakest of the General Motors brands in terms of year over year sales growth but with 3.7% - GMC was still in the black for August 2012. The Savana Van led the way in terms of growth with a hefty improvement of 72.6% last month, followed by the Acadia SUV with an increase of 25.5% and the Terrain SUV with a jump of 16.1%. GMC was led in sales by the Sierra pickup family with 14,495 units sold while the Terrain was second with 9,143 sold and the Acadia was a close third at 8,148.

LG's New EV Battery Plant Is a Welcome News for Tesla
Tesla Giga Berlin's New Hurdle: It's Not Only the Gov't, but Now Tesla Itself
END_OF_DOCUMENT_TOKEN_TO_BE_REPLACED