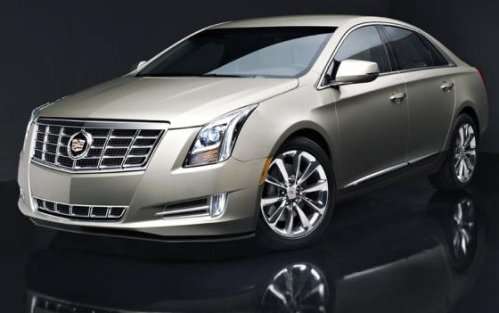 It has been expected for some time that the 2014 Cadillac XTS would feature the same twin turbocharged V6 engine that was introduced with the 2014 Cadillac CTS but this morning GM made it official – with this twin turbo mill packing an awesome 410 horsepower.
Advertisement

There are a variety of new features for the 2014 Cadillac XTS sedan but the most significant is the addition of the new optional twin turbocharged V6 engine. Measuring the same 3.6 liters as the naturally aspirated based engine, this twin turbo engine provides 410 horsepower and 369lb-ft of torque. Although these figures represent a big drop from the 420 horsepower and 430lb-ft of torque offered by the similar engine in the upcoming CTS, this new mill brings much needed power to the Cadillac flagship luxury sedan. This new twin turbocharged V6 engine will used a set of compact turbochargers forcing about 12psi of boost into the engine with a revised direct injection system helping to create the available 410 horsepower.

One of the very few legitimate complaints about the new Cadillac XTS is the lack of power from the standard 3.6L V6 engine but the new twin turbo V6 should comfortably fix that problem. With 410 horsepower and 369lb-ft of torque, the 2014 XTS will better be able to rival the V8 engines featured in the competitors’ full size luxury sedans. Like the base V6, the new powerful twin turbo V6 will be mated to a 6-speed automatic gearbox with steering wheel mounted paddle shifters with the buyer’s choice of front or all wheel drive. There is no question that the 2014 XTS AWD sedan with the new 410 horsepower force fed V6 will be a blast to drive.

Those 2014 Cadillac XTS sedans fitted with the twin turbo V6 will be recognized on the outside by a unique grille treatment and rear end badging.

The base engine for the 2014 XTS continues to be the naturally aspirated 3.6L V6 with 304 horsepower 264lb-ft of torque and all XTS sedans will continue to feature Brembo front brakes and a similar magnetic ride control suspension system to the one used in the Chevrolet Corvette ZR1.

New Technology for the 2014 Cadillac XTS
In addition to the new twin turbocharged V6 engine, the 2014 Cadillac XTS will receive a handful of new high tech features to make this flagship luxury sedan even more loaded than the 2013 models. Front wheel drive models will come with automatic parking assist and electric power steering systems while all non-base model (Luxury, Premium, Platinum) XTS sedans will feature Intellibeam headlights that automatically switch between the high beams and low beams, driver’s seat memory, rain sensing automatic windshield wipers and illuminated exterior door handles. A rear seat entertainment system will be available for 2014 along with a revised rear seating area armrest control panel that gives rear passengers the ability to control sound system controls and the controls for the new opaque sunshade that works with the incredible panoramic sunroof of the XTS.

This is all in addition to the incredible amount of content already in the Cadillac XTS sedan. Click here to read out recent review of the XTS AWD Premium for a closer look at this large premium luxury sedan and all of its many amenities.