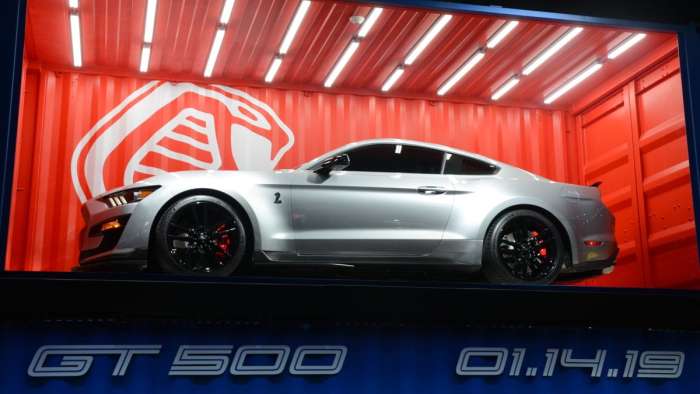 Ford’s most powerful Mustang will fall short of the Camaro ZL1 and Challenger Hellcat in terms of top speed.
Advertisement

Ford Motor Company recently issued a press release with all sorts of information on the 2020 Mustang Shelby GT500, much of which pertained to cooling and aerodynamics. In that piece, the company references downforce levels at 180 miles per hour, which lead to the folks at Car & Driver doing some digging – which led to the news that the new GT500 is electronically limited to 180 miles per hour.

While that top speed will never have any impact on most of the people who buy and drive the new Shelby Mustang, it will have an impact on those owners who plan to participate in high speed events, but the biggest impact here is going to come in the world of marketing. This top speed technically makes the new GT500 the “slowest” of the modern American muscle cars in their premium form and in current performance world, that appears as a weak spot in the armor of the new Shelby.

Super Muscle Car Top Speeds
The top competitors for the 2020 Ford Mustang Shelby GT500 are the Chevrolet Camaro ZL1 and the Dodge Challenger SRT Hellcat. The Camaro is offered in standard ZL1 and ZL1 1LE form while the Hellcat comes as standard or Redeye. The standard Camaro ZL1 packs 650 horsepower and a top speed of 198 miles per hour*, while the added aero bits of the 1LE package lower that number to 190. The standard Challenger Hellcat with 717 horsepower has a top speed of 199 while the 797-horsepower Hellcat Redeye has an official top speed of 203 miles per hour, making it the fastest car in the segment.

*Update: I previously stated that the non-1LE top speed was 202 miles per hour. While the ZL1 did hit 202 during top speed testing on one run, the official number is the average of two runs and that number is 198 miles per hour. This correct number appears in the information above, but having said 202 earlier, I wanted to correct my mistake.

The 2014 Ford Mustang Shelby GT500 offered 662 horsepower and an official top speed of 200mph, and with the 2020 version promised to pack at least 700 horsepower, you would expect a similarly-high top speed. However, the Ford engineers thought that it would be best to electronically limit the new GT500 to 180 miles per hour, making this the first of the modern super muscle cars to have a cap placed on the performance capabilities from the factory.

Won’t Impact Many Owners
While many people who will never own a car that is capable of hitting 200 miles per hour will bad-mouth the GT500 for its low top speed, the reality of the situation is that very few people who have cars capable of those speeds will actually see those speeds. To reach those speeds, you generally need a very long stretch of open pavement, like an air strip or an area set up for high speed runs and even in the most extreme street racing situations, few people see 200mph.

I daily drive a Hellcat Challenger with an official top speed of 199 miles per hour and while I drive my car very hard, I’ve never been north of 190. In fact, I have tested quite a few different cars with 200+ top speed figures on a closed circuit and none got close to that number, so it takes a fairly unique situation to be able to go that fast (and live to talk about it).

Where this will have the biggest impact is in the argument trenches of the internet and in the world of marketing.

Marketing Black Eye
The modern muscle car segment is all about bragging rights. Every company wants to have the most power, the best 0-60 times, the best quarter mile times and the highest top speed. This was why Ford was happy to talk up the 2014 GT500 with 662 horsepower and a 200mph top speed, as those were groundbreaking numbers that gave them – and the owners – bragging rights over the competition. Even if a 2014 GT500 owner never got close to 200, he or she could say to many people “my car is faster than yours”, and they would be right.

This means that for the 2020 Ford Mustang Shelby GT500 to have any bragging rights over the competition on a stock-to-stock basis, it will have to be an absolute terror on a track with turns. It seems very likely that this car will be the most road course-capable muscle car ever, but on a track with a particularly long straightaway – like the Nurburgring – this limited top speed could present a problem.

In the long run, the 2020 GT500’s limited top speed won’t lose it many races on the street, but it gives the competitors more bragging rights while also presenting a barrier for those buyers who plan to truly push the new Shelby Mustang to its limits. An aftermarket tuning device or some other alteration of the factory speed limiter can do away with the cap on the top speed, but the odds are good that tampering with the engine computer will also do away with the warranty.

Do you think that this is a good move by Ford? Share your thought in the comment section below!

Kel P wrote on March 14, 2019 - 4:54pm Permalink
Yes for bragging rights at least Ford should have just said it will do 200 and what ever and then said we will put a limiter on it. The marketing for this car is terrible.
DeanMcManis wrote on March 14, 2019 - 6:26pm Permalink
I think that top speed capability is one of the most overrated specs on any performance car. The new GT500 will probably get some flack from internet spec-warriors, but for the rare handful of high speed racers, they will likely get a custom tune to override the top speed limit. You raise all of the flaws in the value of higher top speeds, and many of the supercar manufacturers have also stopped the competition for higher top speeds because there are often compromises made in normal high speed driving and usable performance to gear for higher top speeds, just to have a higher top speed number that 99% of the owners will (wisely) never attempt.
Joel wrote on July 31, 2019 - 5:23pm Permalink
Nurburgring is the most iconic track in the world and Ford Won't track their car there? What do they have to hide? Has nothing to do with most owners will not see north of 180MPH. I am not brand loyal I drive a 2017 ZL1 and 2019 Ram I love all vehicles and respect the hellcat but prefer a ZL1 but this is just another reason I will never have a FORD in my driveway. And for the record I had my ZL1 @ 180MPH and yes I did run out of road but it was a blast! As far as getting a custom tune on a brand new GT500 that will already be overpriced and dealers charging 30K over MRSP no thanks.