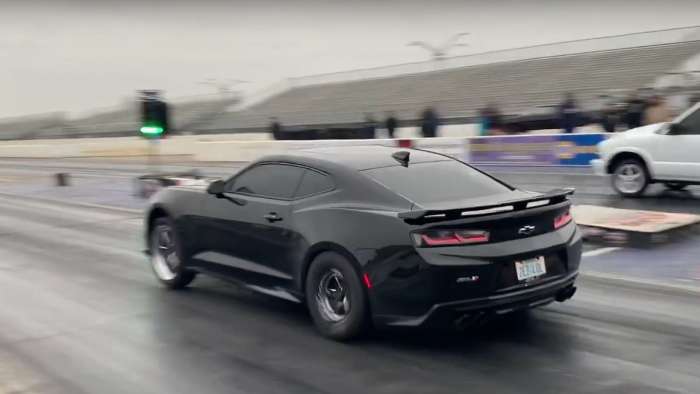 This past weekend, Michael Talley and his 2018 Chevrolet Camaro ZL1 hit the track at Memphis international raceway and on the first run down the quarter mile, a new world record for the quickest 6th gen ZL1 with the stock supercharger was set – with Talley laying down a 9.57 at 143 miles per hour.
Advertisement

Michael Talley has owned, built and raced a long list of incredible American performance cars, including a Hellcat Challenger, a Hellcat Charger, a handful of Ford Mustangs and a C7 Z06, but his newest strip-and-strip terror is a new 2018 Chevrolet Camaro ZL1. Shortly after getting the LT4-powered Chevy muscle car, it went under the knife, getting a long list of items that increase the output and the ability to get down the track.

Many of Talley’s past cars have been among the quickest of their kinds, but on his first run down the track with his 2018 Camaro ZL1, he set the world record for the quickest new ZL1 with the stock supercharger and without nitrous. Video of the world record-setting run is available below.

The Mod List
Michael Talley’s 2018 Chevrolet Camaro ZL1 came from the factory with the 650-horsepower LT4 and the new 10-speed automatic transmission that GM developed with Ford Motor Company.

Engine upgrades include a new lower pulley that works with the stock upper pulley to create 14 pounds of boost, a custom heads/camshaft combo, dual methanol injection, 2-inch Kooks headers, a Rotofab intake, a ported blower snout, a Katech 103mm throttle body, a Corsa exhaust system and an NX blower lid. He is running the stock upper pulley, a stock fuel system, but the engine is tuned to run on VP Racing C16 race fuel by Ryan Stevens at Gwatney Performance Innovations in Jacksonville, while Jokers Performance ported the blower snout and Greg Taylor did the wrenching. For those unsure, the NX lid does not mean that he is running nitrous, but this lid does flow better than the stock LT4 lid. With this setup, this Camaro is making around 750 horsepower and 720 lb-ft of torque at the rear wheels.

Next, to get the best possible traction with the stock suspension setup, this Camaro features a Carlisle Racing 15-inch rear wheel conversion package with 15x10 Weld wheels wrapped in 28-inch Mickey Thompson drag radials. It also has lightweight 20-inch wheels up front.

The Record Run
Michael Talley made one run this past weekend and on that pass, he ran a 9.57 at 143 miles per hour, making this the quickest 6th gen Camaro ZL1 in the world without nitrous oxide. The video below shows that run and in it, you can see that Talley comes out of the hole pretty gently and he still runs a 9.57. Word on the street is that when he gets to the track next time, he will be coming out a little harder, so the odds are good that he could reset his own record.

In the meantime, Talley is looking to line his Camaro ZL1 up against a long list of trash-talkers who suddenly don’t have much trash to talk – or any interest in racing the world’s quickest blower-only 6g ZL1. We aren’t surprised, as it is much easier to run your mouth than to run record-setting track times and with Talley setting records with a soft launch, it is going to take near-record performances from his competitors to grab a win against this Camaro.

Joe Schneberger wrote on June 13, 2019 - 8:53pm Permalink
I ran [email protected] on stock heads and camshaft so far. His 9.50 is going down and I’m going to do it with the a stock bottom end engine. Mine is a true bolt on only car so crazy his heads and cam package isn’t giving the car much more power at all. I’m in Jacksonville too where his tuner is but I tune my own stuff. Going to be fun going after his time on my stock stuff.
Steve Holloway wrote on March 25, 2021 - 7:31pm Permalink
Joe, It's been two years. Have you run 9.50 yet?