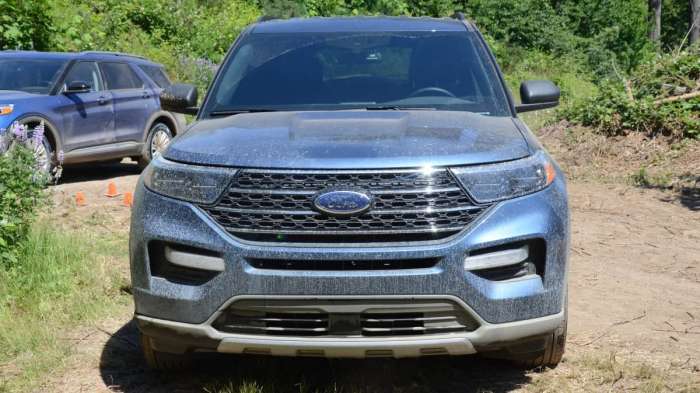 The 2020 Ford Explorer Hybrid can tow and cross rough off-road situations just like the non-hybrid models while combining the rear-drive feel with impressive power and seamless electric transition.
Advertisement

When Ford Motor Company first introduced the 2020 Explorer Hybrid, representatives referred to it as a “no compromise hybrid”. Many automakers would like to claim that their electric-assisted models offer identical driving dynamics, functionality and capabilities as non-hybrid models, but that usually isn’t the case.

Fortunately, the company recently flew me out to Stevenson, Washington to test the entire 2020 Explorer lineup and while the ST was the most fun to drive, the hybrid was the model that impressed me the most. Ford had us do things with the hybrid Explorer that most automakers would never consider, including towing a boat through steep, mountain roads and playing on an off-road course alongside the non-hybrid models.

After this experience, I agree that there is no compromise in basic functionality with the 2020 Ford Explorer Hybrid, as it does just about everything that the non-hybrid models can do while blending all-electric driving with a strong V6 in the new, rear-drive platform. This is a hybrid that drivers who have traditionally disliked hybrid SUVs will enjoy, as shy of all-electric mode, this Explorer never feels like a hybrid.

Rear-Drive on the Road
My time in the 2020 Explorer Hybrid began with the on-road portion in a rear-drive model. This is the most fuel-friendly package for the new Explorer, offering 318 horsepower and 322 lb-ft of torque from the combination of a naturally aspirated 3.3-liter V6, a 10-speed automatic transmission and a hybrid assist motor on the transmission. As I expected, the rear-drive layout of the new Explorer leads to better driving dynamics, with the longer wheelbase offering a nice combination of handling and ride quality. 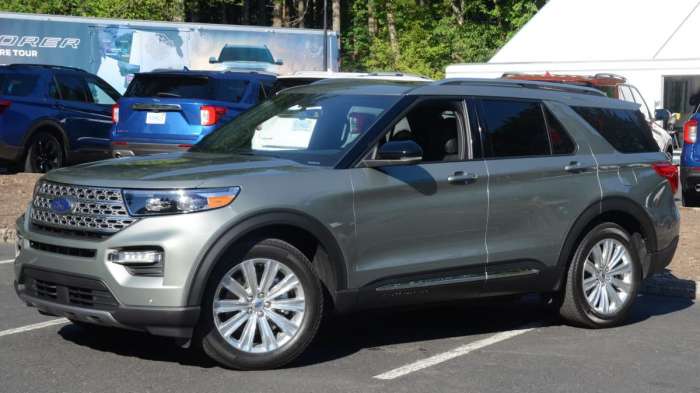 Yes, I understand that many people who buy a hybrid SUV of this size aren’t looking to carve up the corners, but when cruising the twisty rural roads of Southern Washington, the Explorer Hybrid was fun to drive. The gas-electric hybrid drive system offers plenty of power to yield strong acceleration from a stop or when asking for more power at highway passing speeds, and if you hammer the throttle from a stop, the hybrid SUV will spin the back tires a bit. As for the basic driving feel, this size of SUV with rear-wheel-drive creates the on-road feel of a big sedan more than a truck, which was a concern of some readers when we first met the 2020 Explorer earlier this year.

What I liked the most about the Explorer Hybrid is the fact that the transition between electric drive and gas drive is seamless enough that I had to look down at the tachometer to see if the engine was running or not. When driving with the windows down at 35 miles per hour, you can’t hear the gasoline engine start and there is no hesitation between the two drive configurations, so if not for the lack of sound or gauge cluster indicators, most drivers wouldn’t be able to guess that this is a hybrid.

Unfortunately, between the traffic and the steep hills, I wasn’t able to get a reasonable fuel economy estimate, but we know that it will be the most efficient of the lineup without diminishing the driving dynamics or capabilities.

Towing a Boat
Speaking of capabilities, the 2020 Ford Explorer Hybrid is capable of towing 5,000 pounds and at the media first drive event, we were towing a 4,300-pound boat trailer. That is short of the peak capacity, but with this boat being a very average weight for an American trailer, it made good sense for testing. 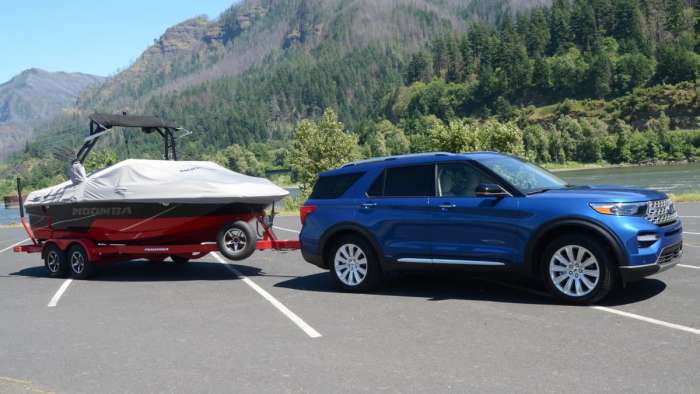 Not surprisingly, the Explorer Hybrid pulled the boat around the steep hills without any issue, winding from our base of operations in the hills down to the Columbia River and back without much struggle. Acceleration from a stop and in the mid-range is solid, and at no point did the hybrid SUV struggle to pull the trailer, even on the biggest hill climbs.

What did surprise me is that the brakes of the Explorer Hybrid are not the squishy, unresponsive stoppers that many hybrid vehicles feature. The Explorer has regenerative braking, so you are charging the batteries when on the binders, but unlike so many hybrids, the new Ford SUV braking system feels like every other system. When you hit the brakes, there is a quick response from the brakes with minimal pedal travel, so you don’t have to mash the brakes when coming down a steep hill with a 4,300-pound boat hooked up out back.

Finally, when navigating the higher speed, curvy roads with the boat out back, the new Ford handled flawlessly, so if you are looking for an electric-assisted SUV to tow a boat on the weekends, the 2020 Explorer Hybrid is a great option – perhaps the best on the market.

Heading Off Road
It isn’t all that unusual to tow a boat with a hybrid SUV, but as media drives go, taking this type of vehicle into a fairly rough off-road course is unheard of. Some companies that pride themselves on their off-road pedigree, like Jeep or Land Rover, will offer off-road testing, but for vehicles like the Explorer Hybrid, it is an odd move. However, it went a long way in showing that the new Explorer is truly a no compromise hybrid.

The off-road course began with a steep downhill followed by a steep uphill climb. After snaking through some tight turns, we came across a water crossing with loose stone at the bottom, but the sealed batteries and Intelligent 4WD system had no issues fording the fake creek. After the water, we dealt with some water, a steep slide slope on which I achieved 26 degree of lean and the course ended with a long, steep uphill climb. 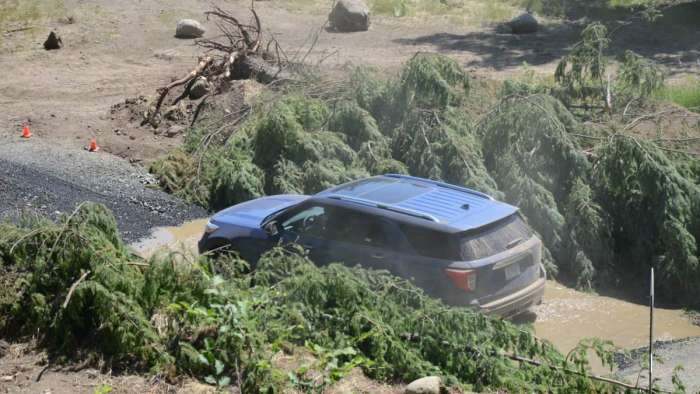 We drove the Explorer Hybrid and the XLT on this course back-to-back and the hybrid model performed every bit as well as the non-hybrid model. Again, I don’t imagine that many Explorer Hybrid owners plan to go off-roading, but if they find themselves trying to visit a friend who lives on a rough, unpaved road, this hybrid won’t have any problems getting to the planned destination.

The Final Word
If you want a roomy, hybrid SUV that gets great mileage for the size with a limited range of all-electric driving that is also fun to drive, great with a trailer and competent on an off-road course, the 2020 Ford Explorer Hybrid is your best choice. Add in the fact that you can get many of the Explorer’s premium interior features and you have a hybrid that can do everything that the competitors can do, if not more.

DeanMcManis wrote on June 25, 2019 - 12:17am Permalink
I am not surprised that the 2020 Hybrid Explorer can handle regular SUV duties just fine. I am surprised that Ford has not gone through extra effort to get the EPA MPG ratings of the Hybrid model, because it's gas mileage will be the EV drivetrain's main selling point. I am frankly disappointed in Ford for not releasing a plug in hybrid version of the Explorer. It's not like Ford doesn't have years of experience designing and building PHEV vehicles. And a plug in hybrid Explorer would be a step ahead of the 3-row SUV competition. BMW, Volvo, Mercedes and several others offer PHEV SUVs, but most are more expensive or smaller. The Toyota Highlander is probably the Explorer's best competition, but they also only offer a regular hybrid model, and it's price premium over the base Highlander is hard to justify by a roughly 5MPG average gas mileage gain.
Ed B wrote on June 27, 2019 - 7:48am Permalink
Good points Dean. Might I add, the new 2020 Highlander Hybrid will not be as capable as the Explorer. Their new engine is significantly lower in HP (240). In addition, the rear wheels are only powered by a separate electric motor which won't exceed 40 (HP) to assist in AWD traction - a step backward in my opinion. So towing will be a challenge as well. My only issue is the price point on the Ford hybrid. However, as you aptly noted - against the luxury brands it's priced well.