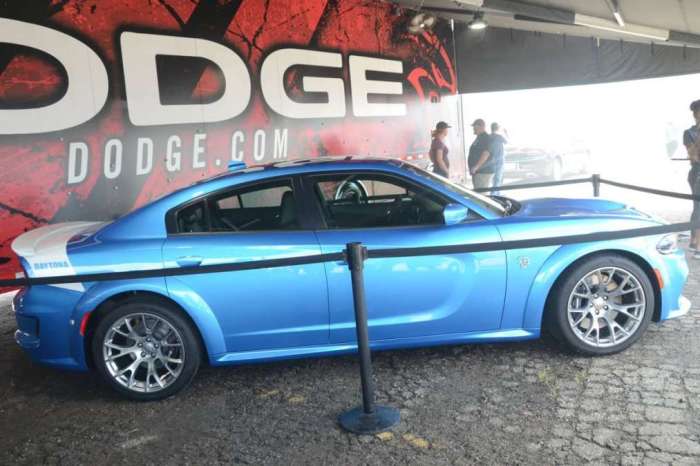 Dodge recently announced that the 2020 Charger SRT Hellcat Widebody would be available with a unique Daytona 50th Anniversary Edition that lifts the engine output up to 717 horsepower. That announcement was made via a press release with the promise that the limited edition Hellcat Daytona would make its formal, public debut at the 2019 Woodward Dream Cruise. For those who aren’t familiar with the massive Detroit event, it was held this past weekend, with thousands of spectators flocking to the Modern Street Hemi Shootout area in Pontiac to see the 2020 Dodge Charger Hellcat in “standard” and Daytona form, along with a huge collection of the quickest modern Mopar street cars in the world.

Dodge and the MSHS
For many years, Dodge and Mopar had a massive display at the annual Woodward Dream Cruise at the corner of Woodward Avenue and 13 Mile Road. Unfortunately, that large parking lot was purchased and redeveloped into a large parking structure, forcing Dodge to find a new spot along the route. Around the same time, Dodge began sponsoring the popular Roadkill Nights event the week before the Dream Cruise, and in being unable to find a suitable location during the cruise itself, Dodge simply didn’t have a display in 2017 and 2018.

However, for the 2019 Woodward Dream Cruise, Dodge teamed up with the Modern Street Hemi Shootout (MSHS) series, which has had a large, popular display along the cruise route in Pontiac. This allowed the race series to expand its area while also bringing in some official Dodge displays and vehicles. 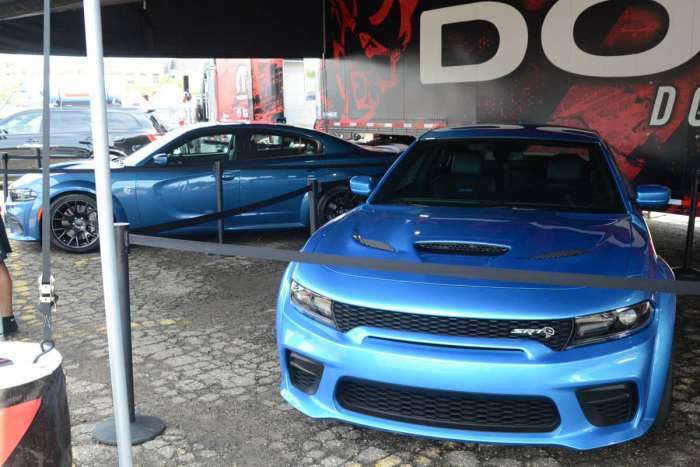 One of those vehicles was the 2020 Dodge Charger SRT Hellcat Daytona 50th Anniversary Edition, which was parked under the brand’s huge display truck with a “normal” 2020 Hellcat Charger with the new widebody design.

2020 Dodge Charger on Display
As you can see in the pictures here, the 2020 Dodge Charger SRT Hellcat Daytona 50th Anniversary Edition was on display under the awning of the huge Dodge-branded tractor trailer, alongside the new Hellcat Charger widebody that debuted earlier this summer.

The 2020 Dodge Charger Hellcat Daytona features uniquely-colored wheels, package-specific B5 Blue exterior paint, the familiar Daytona stripe on the rear end, unique interior accent stitching with package-specific badging and some tweaks to the supercharged engine that add an extra 10 horsepower. To be more specific, Dodge upper the peak engine speed a bit, which lifts the output to 717 horsepower with the same 650 lb-ft of torque. 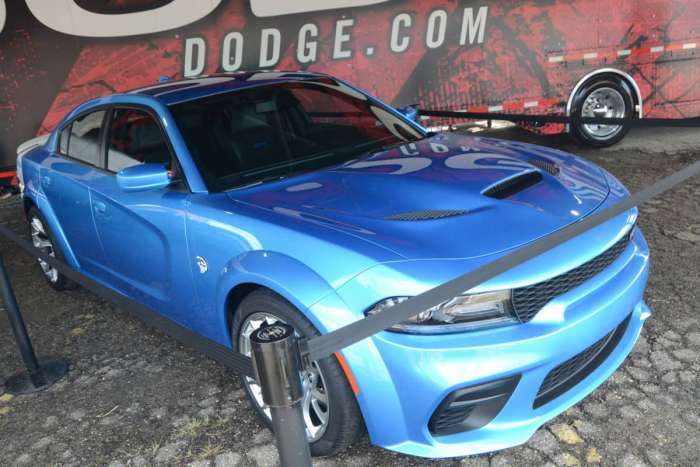 We don’t know how much the Daytona 50th Anniversary Edition will cost yet, but we do know that production will be limited to just 500 units, so when they go on sale later this year, we can expect them to be towards the upper end of the pricing scale for the supercharged sedan.

Fortunately, production volume, pricing and availability didn’t matter to the thousands of Woodward Dream Cruise spectators who visited the Modern Street Hemi Shootout display. Getting to be one of the first people to see this limited edition super-sedan made the MSHS area a must-see location along the route and while there, those folks had hundreds of other Dodge, Jeep, Ram and other Mopar-powered products to check out. This includes some other new Dodge products, including the Stars and Stripes edition Challenger and Charger, the new Durango Pursuit police vehicle and the Challenger 1320.

2019 marked the return of Dodge to the Woodward Dream Cruise, and with the help of the Modern Street Hemi Shootout series, it was an impressive return with one of the most exciting displays along the route.

DeanMcManis wrote on August 25, 2019 - 1:30am Permalink
I like the widebody, I like the wheels in silver, I like the B5 Blue, but I am not a fan of the white splash across the trunk and wing. Plus I think that Dodge should offer the RedEye engine package on ALL of their vehicles that have the Hellcat motor, (including the Trackhawk). And they should offer AWD for all Hellcat/Redeye models too.

Tesla-Funded Research Reveals One of The Biggest Mysteries of EV Battery
Tesla Tesla Buyer Nets a Whopping $12,000 Discount After Asking for Reduction
END_OF_DOCUMENT_TOKEN_TO_BE_REPLACED