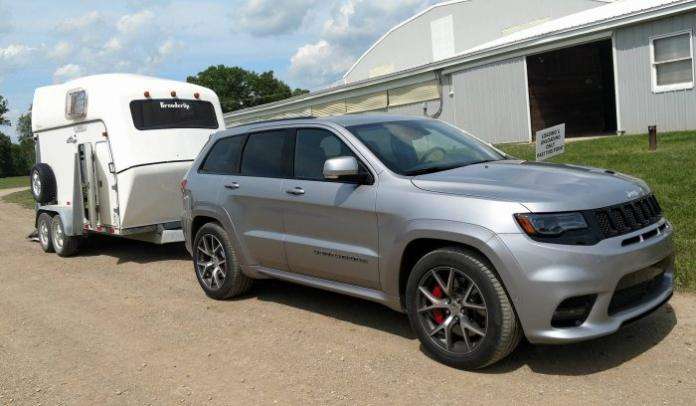 The Jeep Grand Cherokee SRT has long been one of the best performing SUVs in the US market, but to test the utility aspect of this high performance machine, I used the SRT Jeep in place of my half ton truck for a weekend horse show – and not surprisingly, the 475hp sport ute shines when being worked like a pickup.
Advertisement

The 2017 Jeep Grand Cherokee SRT is an incredible machine. The 6.4L, 392 cubic inch Hemi sends 475 horsepower and 470lb-ft of torque through a high performance 8-speed automatic and an advanced all-wheel drive system to make this Jeep one of the quickest SUVs in the US market while the massive Brembo brakes and the adjustable suspension system combine to make the SRT Jeep an incredible all-around performance vehicle. Also, in addition to the package-specific exterior, the Grand Cherokee SRT has a premium interior with features which are most commonly found as standard equipment in luxury vehicles. The SRT Grand Cherokee has competitors in the large high performance SUV segment, but they come from companies like Range Rover, BMW and Mercedes Benz – all of which cost far more and, in some cases, fall short of the Jeep’s performance capabilities.

However, with the Jeep Grand Cherokee SRT having been on the market for a few years in the same relative form in terms of performance, I wanted to do more in this review than just talk about how well it handles or how quickly it gets through the quarter mile. I mean, we all know that the SRT Jeep is capable of high 12s to low 13s in the quarter mile and we have all heard about how it will handle a high speed corner as well as any SUV in the world.

If you are looking for a high performance SUV, the 2017 Jeep Grand Cherokee SRT is one of the best on the market and, dollar for dollar, it is unbeatable.

But with the Jeep Grand Cherokee SRT being a “sport utility vehicle”, I wanted to test the utility aspect as much as I did the sport, and it just so happened that while I was testing the 2017 SRT SUV, my wife had a horse show. That allowed me to put the high performance Grand Cherokee through the same work that my half ton truck has been doing for years, and for a vehicle that has 12-second quarter mile capabilities in the right conditions – this sporty Jeep did a great job of doing the work of a full size truck.

SRT Jeep VS the Horse Show
A weekend at one of my wife’s horse show begins with packing everything that we need into the tow vehicle and the horse trailer, along with loading two of our champion show horses into the same 2-horse trailer which I use for all of my towing tests. This includes 150 pounds of hay, 50 pounds of grain, 33 cubic feet of bedding in 6 tightly compressed packages, a 3x3 metal cart, the saddles for both horses and all of the basic supplies needed for the horses and rider to get ready to show for the weekend. Oh, and the two horses. My standard 2-horse test trailer has a small storage area, but I still have to put the majority of the needed items in the bed of the truck and when using my half ton pickup with a 6.5’ bed, the majority of the cargo area is used when headed the show while the back seat holds the saddles and other items that we don’t want sliding around the bed or the cargo area of the trailer. Of course, the Jeep Grand Cherokee SRT doesn’t have a bed, so I had to be a bit craftier when packing everything up, but I was still able to fit everything that we needed into the Jeep and the cargo area in the trailer. In the rear cargo area, we packed the grain and the bagged bales of hay. In the back seat, the saddles were buckled into the outboard positions and my wife’s show clothes were packed between the saddles. The basic grooming supplies were tucked in behind the front seats on the floor and everything else, including the bedding packages and the much cart, was packed into the cargo area of the trailer.

It was a tight fit getting everything to the horse show in the SRT Jeep rather than a half ton pickup with a bed, but we made everything fit. The last step was to hook up the horse trailer, load the horses and hit the road. The optional Towing Package of the SRT Grand Cherokee adds a class 4 hitch receiver with a plug for both a 4- and 7-point harness, and with the backup camera, hitching up to the trailer was a breeze. With a simple 3.5” drop, the SRT Jeep has a ride height which caters to pulling the trailer, making hooking up that much easier.

With the trailer hooked up and everything that we needed packed up, it was time to load the horses and get on the road with the 2017 Jeep Grand Cherokee SRT. Once loaded, the trailer tips the scales around 5,500lbs, which is well below the towing capacity of the SRT Jeep, but with this being such a common load in the equestrian world, I use this trailer and load for all of my test vehicles.

As you might imagine, the 392 cubic inch Hemi with 475hp and 470tq allows the 2017 SRT Jeep to pull the 5,500lb horse trailer without breaking a sweat. Both in climbing hills at from a stop around town and when cruising down the highway, the Grand Cherokee SRT packs enough power to accelerate as quickly as any horse owner would want to with their valuable cargo out back. In short, at no point in the towing process does the SRT Jeep labor to pull the loaded horse trailer and as you might expect, this high performance SUV pulls the trailer better than many half ton pickups. One place where the 2017 Jeep Grand Cherokee SRT doesn’t outshine the larger trucks is in handling with the trailer. While the big Brembo brakes allow the SRT Jeep to slow down with the added weight without any issue, the 5,500lb trailer pushes the vehicle around a bit more than it does a bigger, heavier truck, but the handling under load is still better than a great many SUVs of this size. On the highway, you hardly notice that the trailer is back there, but when you get into tighter quarters – such as the farm roads around the show venue – the trailer weight causes a bit of understeer on sweeping turns. Realistically, we are talking about an incredibly slight difference, but as will be the case when comparing a large truck to any unibody SUV, the heavier vehicle handles that weight a bit better when it comes to cornering.

Finally, the last few miles of driving to the horse show took place on a muddy, dirt road and in several cases, I found myself pulling up steep hills in deep mud. While leaving the Drive Mode system in Towing mode (rather than Mud mode), the high performance Jeep easily pulled the trailer up the muddy hills with ease. Also on that route, we encountered some serious ruts and trenches in the road, all of which were no problem for the Grand Cherokee SRT. Granted, I took these turns slower than I would with a vehicle which is better equipped for a rough off-road trail, but like most Jeeps – rough roads were no problem.

In short, while it was a tight squeeze getting everything that we needed in the Jeep rather than a pickup with a bed, the SRT Grand Cherokee pulled the horse trailer just as well as any half ton truck and better than any unibody SUV which I have tested in recent years. Best of all, once we dropped the trailer at the horse show venue, our trips around town to pick up the few things that we didn’t bring with us were done with all of the comfort and performance of the SRT Jeep – with 0-60 times in the mid-4 second range and quarter mile times in the low 13s.

The Final Word
If you want a high performance SUV which will pull a 2-horse trailer (or comparably sized trailer) as confidently as a large truck, there is no option on the market today which will combine this level of performance and this level of capability for this price point. With a price as tested of $82,455, the SRT Grand Cherokee is considerably more expensive than your average half ton truck or large SUV, but when you compare this Jeep to other SUVs with similar performance and towing capabilities – the SRT SUV is far less expensive than the competitors. The best compliment that I can pay to an SUV after performing the tasks of a horse show weekend is that I would recommend the vehicle to anyone who regularly pulls a trailer of this size – and that is exactly that I have to say in this case. I wouldn’t think twice about using an SRT Jeep as my full time towing vehicle and I would recommend it to anyone looking for a vehicle which will comfortably pull a similar 2-horse trailer. Even if we set aside the incredible performance measures and the luxurious cabin, the Jeep Grand Cherokee is a very confident towing vehicle, but the performance and premium features which are standard in most SRT vehicles make this the best SUV on the market for someone who wants a very fast vehicle that will also tow a trailer with confidence.