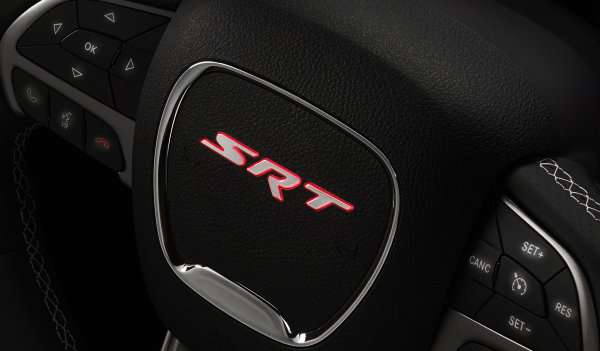 2017 Hellcat Steering Wheel can be Retrofit to 15-16 Charger, Challenger

While there were all sorts of rumors about the 2017 Hellcat cars coming with more power, the real changes from the 2016 Hellcat Challenger and Charger are fairly minimal – although the supercharged models get the most changes of any 2017 model year muscle cars. Both the Charger and Challenger in Hellcat trim get new Hellcat logos inside and out, lighter wheels, the newest version of the Chrysler UConnect infotainment system and a new steering wheel with a red backlit SRT badge in the middle.

In the case of many Hellcat Challenger and Charger owners, if they wanted more Hellcat logos or lighter wheels, they have already changed the wheels or added more logos via the ample aftermarket, so those changes aren’t as interesting to them. On the other hand, the glowing steering wheel center has piqued the interest of many 2015 and 2016 model year owners, and many of them have inquired about swapping in that new steering wheel when the parts become available.

2017 Steering Wheel in a 2015-2016 Hellcat Car
I spoke with Jim Peyatt, who owns a 2014 SRT Jeep Grand Cherokee and a 2015 Dodge Challenger SRT Hellcat. Jim explained that the 2015 SRT Jeep came with a standard backlit steering wheel badge and when he saw this, he purchased a 2015 SRT Jeep illuminated airbag module from his local dealership. After removing the airbag module from his 2014 Jeep, it was just a matter of plugging in the harness and reinstalling the center of the steering wheel. No special wiring or installation information was needed – the 2015 Jeep airbag module with the white backlit SRT badge was a “plug and play” modification.

The same was true for his 2015 Hellcat Challenger. The 2015 Jeep airbag module swapped right in, so Jim Peyatt has one of the few (perhaps the only) Hellcat Challenger with a glowing steering wheel badge – at least until the 2017 models begin reaching owners later this year.

In other words, if you have a 2015 or 2016 Hellcat Challenger or Charger and you love the red glowing steering wheel center on the 2017 models, you will eventually be able to buy the airbag module from your local dealership and swap it into your car. The cost of the 2015 Jeep module is around $500, so I would expect the 2017 Hellcat airbag to be in the same basic price range.

Of course, if you don’t want to wait for those parts to become available, you could always just order a 2017 Hellcat Challenger or Charger and get all of the new features in one convenient, 707 horsepower package.

Thanks to Jim Peyatt for his information on this swap!