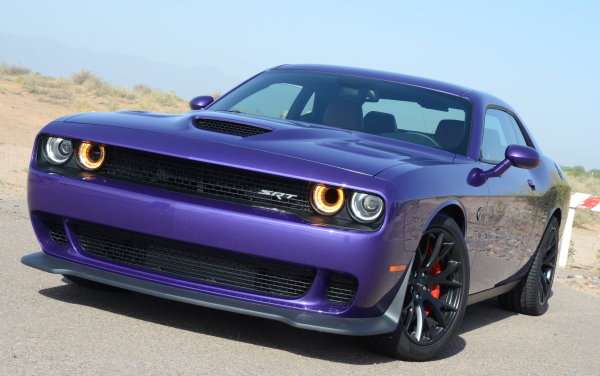 Over the past few weeks I have seen a growing number of links to junk news sites insisting that the 2017 Dodge Challenger SRT Hellcat and the 2017 Dodge Charger SRT Hellcat will be getting more power – but I don’t believe for one second that the mighty Hellcat Hemi will be getting a boost in power so soon after being introduced with 707 horsepower and 650lb-ft of torque.
Advertisement

FCA hasn’t offered up any information on the 2017 Dodge Challenger or 2017 Dodge Charger, but there are a few clickbait sites claiming that the SRT Hellcat package will be getting a power bump for the 2017 model year. In some cases, these sites focus on the rumors of bigger power for the 2019-2020 model years, but they shift the timeline forward to the 2017 model year. In other cases, some of these sites claim to have inside information, even though most (if not all) of the sites in question often post unique information which is later found to be untrue.

Well, I have folks inside of FCA who often offer up little bits of information, but not a single one of them knows anything about a power increase for the 2017 model year Dodge Challenger and Charger in SRT Hellcat trim. This means that either my reliable sources are somehow unfamiliar with something as big as a Hellcat Hemi power increase for the 2017 model year, or the information is just plain incorrect.

I believe that this information is just plain incorrect, and below are a few reasons why I don’t think that the company will up the power of the Hellcat Hemi for the 2017 model year Challenger and Charger.

No Real Competition
The biggest factor in driving an automaker to improve on their current engines or vehicles is competition from their key rivals. In the case of the Dodge Challenger and Dodge Charger, competition from the likes of the Chevrolet Camaro, the Chevrolet SS sedan and the Ford Mustang – the key performance cars from GM and Ford – would lead FCA to offer more power from their supercharged Hellcat Hemi. However, with 2017 marking the third model year for the Hellcat Challenger and Charger, there is still no real competition from Ford, GM or anyone else.

The Dodge Charger SRT Hellcat is still the fastest 4-door full-production sedan in the world and shy of the limited production Tesla Model S – there is truly to competition for the Hellcat Charger.

The Dodge Challenger SRT Hellcat is still the most powerful and the quickest entry in the modern muscle car world, besting the Camaro ZL1 by more than 60 horsepower while the Ford Mustang has no big power competitor for the Hellcat car. While there are some 2-door cars from the likes of Ferrari and Lamborghini which will outmuscle and outrun the Hellcat Challenger, there is no 2-door car in the world that will compete with the Challenger for under $75,000.

In other words, FCA doesn’t need to boost up the power of the Dodge Challenger and Dodge Charger SRT Hellcat models because heading into the 3rd model year – there is still no real competition. No competitors have beaten the power figures and no competitors have cut into the massive amount of marketing attention claimed by the 707 horsepower Dodge cars.

Impact on the Value of the 2015-2016 Models
The second reason why I do not expect a power increase for the 2017 Dodge Challenger and Dodge Charger SRT Hellcat has to do more with the business end of things than real world performance capabilities.

The Hellcat Challenger and Charger are just now reaching the point in the delicate balance of supply and demand where a prospective buyer can walk into a dealership and expect to pay no more than MSRP for their new 707 horsepower muscle car. For the first year or more of Hellcat sales, both cars were in such high demand and such short supply that dealerships were having no problem selling these cars for $10,000 over the sticker price.

However, as we near the third model year, it seems that there are dealerships all over the country who are willing to sell the Hellcat Challenger and Hellcat Charger for sticker price. I’ve spoken with dealership representatives from coast to coast who have these cars for MSRP and in some cases, they have specials which allow people to get into a Hellcat car for under the sticker price.

This is a good thing for those folks looking to buy a new Challenger or Charger with 707 horsepower, as these beasts are finally available across the country with the same low purchase price which FCA originally intended.

Now, if FCA was to roll out a 2017 Dodge Challenger or Charger in SRT Hellcat trim with, say, 750 horsepower, it would effectively make the 2015-2016 models obsolete and along the same lines, the 707hp models would become less desirable and less valuable. In effect, offering up a Hellcat Challenger or Charger with 750 horsepower would have a negative impact on the value of the Hellcat cars from 2015 and 2016. This includes the cars in private hands, but it also includes those vehicles sitting on dealership lots around the country.

FCA doesn’t want to make cars harder for dealerships to sell, especially when we are talking about cars which are relatively unrivaled. It would be different if the new Camaro ZL1 or the new Cadillac CTS-V had 725+ horsepower, but without any competitors offering a real challenge for the Hellcat cars, there is almost no chance of the company upping the output of the Hellcat for the 2017 model year.

Hopefully I am wrong, as I would love to experience an even more powerful Hellcat Challenger and Charger, but with current Hellcat Hemi being totally unrivaled – I believe that the reports about bigger power for 2017 are false.