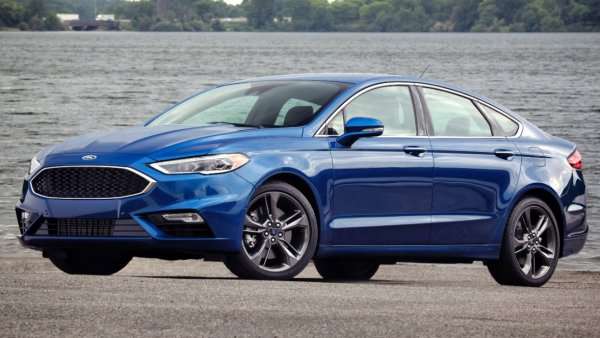 I recently spent a week driving the 2017 Ford Fusion Sport and while this car doesn’t have any affiliation with Ford’s high performance SVT group, this roomy mid-sized sedan is like a modern day interpretation of the Ford SVT Contour from the late 1990s – except with far more power and standard all-wheel drive.
Advertisement

Back in 1998, Ford introduced the SVT Contour – a mid-sized sedan with a specially tuned suspension setup, a unique V6 engine with 195hp and 165kb-ft of torque, a manual transmission and unique body bits. The SVT Contour was far sportier than the rest of the Contour lineup and, really, it was far sportier than anything else in the American mid-sized segment back then. I had a friend who owned one and I got to drive it a time or two. It was quick from a stop, it pulled well through the mid-range and it handled surprisingly well for a sedan of that size…especially when compared to the American competitors.

The SVT Contour was a performance model in a segment which was – and has continued to be – relatively short in terms of fun-to-drive models. Sadly, the SVT Contour would only last through 2000 and since then, the SVT name hasn’t been applied to any mid-sized Ford sedans. Ford has offered some trimlines for the Fusion, but there has really not been another smaller vehicle which is deserving of the SVT badge.

The 2017 Ford Fusion Sport doesn’t wear the SVT badge and it might not have the same handling capabilities of the old Contour – but there is no question that this is the most entertaining Fusion for drivers who love to drive.

The Exterior
On the outside, the 2017 Ford Fusion Sport isn’t all that different from the rest of the lineup, but the slight changes to the grille and front fascia, along with the black-painted 19” wheels, the low-profile rear spoiler and the quad exhaust tips give the Sport package, well, a sportier look. It is pretty minimal, really, but it is the perfect design for someone who wants a car that doesn’t scream “performance sedan”. The average person might not even notice the Fusion Sport as a performance sedan in passing, but that is exactly what it is. Maybe not a wolf in sheep’s clothing, but in a segment of sheep, the 2017 Fusion Sport is a sneaky predator that is more fun to drive than any of the reasonably priced competitors.

The Interior
On the inside, the 2017 Ford Fusion Sport has a premium feel, starting with the leather and suede wrapped sport front seats, both of which are heated with power adjustment controls. This package also includes a leather wrapped steering wheel with shift paddles and controls for both the driver information center and the infotainment system, keyless entry, push button start, aluminum sport pedals and all of the normal features like power locks, air conditioning, etc. Those buyers who want a bit more of a premium touch will want to opt for the Fusion Sport’s 401A popular equipment group, which costs $2,000 and adds the 8 inch Ford SYNC 3 infotainment screen, the dual 4.2” driver information screens in the dash, dual zone climate control, a Sony speaker system and ambient lighting control.

Finally, both the front and rear seating areas have space for average adults, even if everyone in the car is an adult. This is not a mid-sized sedan which will crush the rear passengers when the folks seated up front have their seats adjusted to a comfortable point, so anyone who spends lots of time with 4 adults in the car (like in a carpooling situation) will find the Fusion to be an excellent option.

The Fusion Sport has solid passenger space, plenty of standard premium features and even more than you can add for just $2k, making this a great package for the buyer who wants some high tech goodies – but who also doesn’t want to go for a luxury sedan or a full-out luxury trimline.

Driving the Fusion Sport
The 2017 Ford Fusion Sport looks a little sportier than the other models, but this package can only really be appreciated on the open road. The Sport package includes the standard 2.7L EcoBoost V6, which was first introduced for the 2016 Ford F150. In the truck, the 2.7L EcoBoost makes for a powerful-yet-efficient truck, with solid towing capabilities and the best gasoline fuel economy in the half ton segment. When you take that truck engine and wedge it into a Ford Fusion, it makes for one hard-charging mid-sized sedan thanks to 325 horsepower and 375lb-ft of torque. That power is channeled through a standard 6-speed automatic transmission and an advanced all-wheel drive system, so you can make good use of all of that EcoBoost power without any concern of wheel spin in normal conditions. The Fusion Sport would be a little lighter and a little quicker with front wheel drive, but with 375lb-ft of torque, it would be heavily traction-limited on the low end and no one likes that – so this package is AWD-only.

The good news with that standard AWD system is that when you are stopped at a light with the 2017 Ford Fusion Sport, you can hammer the throttle and rip away from the line with some serious urgency. There is no sign of turbo lag, as the 2.7L EcoBoost is quick to send all of that turbo power to all four wheels in a hurry and away you go. The 6-speed automatic transmission can be controlled by the steering wheel mounted paddle shifters, which give the driver a bit more engaged feeling when making a hard 0-60 or quarter mile pull and as you work through the gears, the Fusion Sport continues to pull hard. As good as the Fusion Sport leaves the line, it is even stronger when you climb into the power from a roll. When you are already cruising along with this Fusion, gearing down into 3rd gear and putting the accelerator all of the way to the floor will allow you to quickly climb past any posted speed limit in America. While I did not measure the 0-60 and mid-range acceleration times, I have driven a great many mid-sized sedans and I do not believe that any comparable car outside of the high-priced luxury segment can rival the Fusion Sport in terms of all-out acceleration. None of the key competitors in the segment – the Honda Accord, the Chevrolet Malibu, the Kia Sorrento, the Hyundai Sonata, the Toyota Camry – have anything that can rival the Fusion Sport and to find a mid-sized AWD car with similar power, you have need to look to the likes of BMW. For example, the BMW 540i xDrive has all-wheel drive and a twin turbocharged engine with 335hp and 332lb-ft of torque, but there that Bimmer starts around $60k – the Fusion Sport starts around $35,000. Yes, I do understand that the BMW 540i is not a fair comparison to the Fusion Sport in terms of interior amenities, but in terms of performance, the 540i is the next closest option for the Fusion Sport. While the 2017 Ford Fusion Sport doesn’t have a high performance suspension setup, it does have the necessary chassis tuning to make good use of all of that EcoBoost power. The ride quality is right on par with the rest of the Fusion lineup and with the help of the advanced all-wheel drive system, you can push the Fusion Sport harder through a series of tight turns than you can any other Fusion, or any other comparably priced sedan of this size. It might be nice to have a slightly more aggressive suspension setup, but that would likely lead to at least some loss in ride quality, so with this being more of a sporty daily driver than a weekend track toy with space for four, Ford made the right move focusing on a mix of comfort and handling capabilities over just cornering. As a result, you can drive this car every day in just as much comfort as you can any other mid-sized sedan sold in America – while sitting have big power on tap when the need arises to let the Fusion Sport stretch its legs.

The Final Word
Mid-sized sedans have long been labeled appliances which do a fine job of getting people from point A to point B, but they generally aren’t a whole lot of fun to drive. The 2017 Ford Fusion Sport maintains all of the key advantages of the mid-sized sedan segment, but it adds gobs of EcoBoost power to make this Ford sedan more fun to drive than any non-luxury sedan sold in America. In fact, the Fusion Sport performs better than some far more expensive luxury sedans, so if you are looking for a great mid-sized sedan with the most bang for your buck – the 2017 Fusion Sport is the best option on the market today. For a car that comes loaded up for under $40,000, there is no mid-sized sedan that combines all-wheel drive, this level of power and a comparable list of interior features for as little money as the Fusion Sport. This is the most exciting mid-sized sedan sold by Ford or any American automaker since the SVT Contour and even among the European luxury automakers - you cannot get these features for anywhere near the price of the 2017 Fusion Sport.