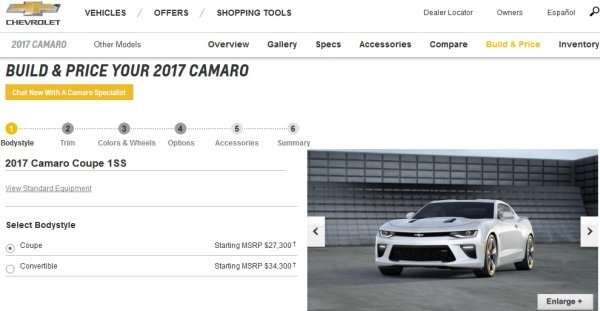 The 2017 Chevrolet Camaro configurator has gone live at Chevrolet.com and in a surprising move, General Motors has added a price increase of $605 to every trimline and – sadly – there is no mention of the new Camaro 1LE or ZL1 just yet.
Advertisement

The 2017 model year for the 6th gen Chevrolet Camaro promises to be an exciting one, with the introduction of the new Camaro 1LE for both V6 and V8 models, along with the long-awaited arrival of the new Camaro ZL1. The configurator page for the 2017 Camaro on Chevrolet.com has gone live and while there is no mention of the 1LE or the ZL1 – there is a price increase across the entire returning lineup.

Fortunately, while the starting prices of every 2017 Chevrolet Camaro have gone up, it looks like the majority of key options have remained the same. For V6 models, the RS package is still $1,950, upgrading from the turbocharger 4-cylinder to the V6 still costs $1,495 and switching from the 6-speed manual to the 8-speed automatic still costs $1,495. For the V8 models, the 8-speed automatic costs $1,495, the magnetic ride control costs $1,695, the performance brake upgrade costs $3,175 and dual mode exhaust costs $895.

An Odd Decision
Since this information comes from Chevrolet.com and not from a press release, there is no clear explanation of why the 2017 Camaro costs $605 more than the 2016 models. I would like to think that the automaker has added value in excess of that dollar value, especially considering the slow sales figures of the 6th gen Camaro, but we will have to wait for more official information to find out if that $605 comes with some extra.

The key complaint from many Camaro fans about the 6th gen car is that the pricing is too high and in asking Camaro/Chevrolet fans why they think the new Camaro isn’t selling better, the high price is the most common answer. Provided that price is the key contributing factor for the Camaro’s lackluster sales, this price increase could run off more prospective buyers and hurt sales numbers even more – at least until the 1LE and ZL1 arrive.

No Mention of 1LE or ZL1
While the configurator for the 2017 Chevrolet Camaro is live, this version of only includes vehicles which carried over from the 2016 model year. The 1LE package should eventually appear in the option list for the LT and SS Camaro coupes while the ZL1 trimline will eventually be listed under 2SS for couples and convertibles, but right now, we can’t build and price these new options for 2017.