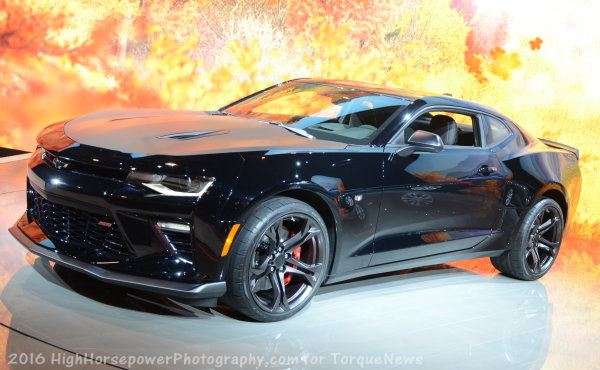 While being tested by Motor Trend at Laguna Seca, the 2017 Chevrolet Camaro 1LE SS turned a quicker lap than the 2015 Camaro Z/28 – a track-focused, stripped down muscle car that had more power and cost some $30,000 more than the new 1LE.
Advertisement

The crew at Motor Trend is currently working on their 2016 Best Driver’s Car proceedings at Laguna Seca and the most surprising vehicle on hand might be the 2017 Chevrolet Camaro 1LE SS. MT hasn’t issued the results of their Best Driver’s Car, but they have posted videos for eight of the contenders and at the end of those videos, we see the cars’ Laguna Seca lap times with Randy Pobst at the wheel.

The 2017 Camaro 1LE SS hasn’t posted the best time, but it posted a better lap time than the 2015 Camaro Z/28 which won the 2014 Motor Trend Best Driver’s Car competition while also beating the Aston Martin V12 Vantage S and nearly tying the BMW M4 GTS.
Mind you, we are not talking about the supercharged Camaro ZL1, - we are talking about the 455 horsepower Camaro SS with the optional 1LE handling package.

6g Camaro 1LE Bests 5g Z28 at Laguna Seca
Each year, Motor Trend takes a small group of high performance cars to Laguna Seca for their Best Driver’s Car competition and included in this year’s challenge is the 2017 Chevrolet Camaro SS 1LE. After the new 1LE turned an impressive lap time in the Car & Driver Lightning Lap trial at VIR, it comes as no surprise that the factory modified Camaro SS laid down such an impressive performance with Motor Trend, but it comes as a surprise that the new Camaro 1LE was quicker around Laguna Seca than the 2015 Camaro Z/28.

For a quick refresher, the 2015 Camaro Z/28 was a street legal race car, coming without features like sound insulation, carpet lining and air condition, and coming with features like a 505hp LS7 engine, carbon ceramic brakes, a track-tuned suspension and lightweight wheels wrapped in the stickiest tires possible. The Camaro Z/28 was the lightest of the 5th gen V8-powered Camaros and based on lap times for around the world, the 2015 Z/28 was the most road course capable muscle car of all time.

The 2017 Camaro SS 1LE just turned a quicker time at Laguna Seca than the 2015 Camaro Z/28. The $45,000 volume model with a handling package outran the $75,000 track-focused at one of America’s most infamous tracks while being piloted by the same professional racer.

The Camaro 1LE Could Win Against Far More Expensive Vehicles
Back in the 2014 Best Driver’s Car competition, Randy Pobst managed a best lap time of 1:37.82 with the 2015 Camaro Z/28. That wasn’t the quickest lap that year, but when combined with the rest of the metrics for the competition – the 5th gen Camaro Z/28 was named the Best Driver’s Car for 2014.

The 2017 Camaro SS 1LE has all of the comforts that the 2015 Z/28 did not, like air condition, a premium sound system and all of the other goodies that you would expect on a street car. The new 1LE SS is more comfortable than the Z/28 in every way for daily driving while turning a quicker lap at Laguna Seca – all while having an MSRP starting around $30,000 below the Z/28.

Based on that, I would say that the 2017 Camaro SS 1LE has a very real chance of being Motor Trend’s Best Driver’s Car for 2016, but the low cost muscle car faces a list of excellent (and far more expensive) vehicles from around the world.

The bottom line here is that the 2017 Chevrolet Camaro SS 1LE has been proven to be just as track capable as the 2015 Camaro Z/28. The 1LE was a little slower than the older Z/28 in the Car & Driver Lightning Lap trials, but on the tighter track – the 1LE beat the high priced Z/28 even though the new Camaro lacks the high tech carbon brakes, the track-ready tires and a mix of 50hp and 25lb-ft of torque.

Now that we have seen proof that the 2017 Camaro SS 1LE does offer slightly better performance than the previous best handling muscle car ever, I can only imagine what an incredible machine we will see with the new ZL1 and the new Z/28. Imagine a car that handles as well as the new 1LE with an extra 200 horsepower and 200lb-ft of torque. That is going to be a real beast on the track and I cannot wait to see what kinds of numbers the higher performance Camaros lay down.

Check out the video below showing the 2017 Camaro 1LE turning in this awesome time at Laguna Seca!