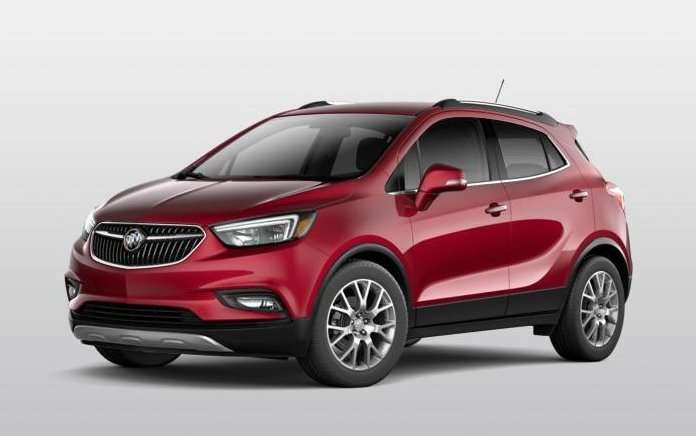 The 2017 Buick Encore AWD Sport Touring sits in the middle of the model range, but this small SUV looks more like a premium package inside and out, with a price in the low $30k range and end-of-year discounts which will cut that number down into the 20s.
Advertisement

When small SUVs were first introduced in the US market, they were marketed to people who wanted a combination of passenger space, cargo space and SUV capabilities in an inexpensive package. Those early small SUVs were fairly barebones, but as time has gone on, every segment has shifted towards the higher end of the scale even when the prices remain low. Small SUV buyers today want more than a roomy cabin and 4WD versatility – expecting the high tech gadgets which were once reserved for premium models – but these compact sport utility buyers want all of these features with at a low price.

The 2017 Buick Encore AWD Sport Touring checks all of those boxes, with premium interior features, plenty of space, a powerful turbocharged 4-cylinder engine powering all four wheels and a price in the low-$30k range. Best of all, this sporty Buick SUV returns better than 30mpg on the highway, checking one more important box on the list of many modern buyers’ demands.

Pricing
My 2017 Buick Encore AWD Sport Touring test vehicle carried a base MSRP of $27,065 while options including the 1.4L Turbocharged engine with Auto Start/Stop, the Bose premium speaker system, Navigation, the Safety Package, Dual Zone Climate Control, the Winterberry Red exterior paint and destination fees lift the price-as-tested up to $31,220. With a price just north of $31k, the Encore Sport Touring is an excellent bargain, but with the 2017 year coming to an end, there are a variety of discounts available. For example, in my car, Buick offers me a $4,000 discount, bringing the price down to $27,220 and that is before you get to haggling with the dealership salesperson.

With enough hunting and bargaining, you can score a 2017 Buick Encore AWD Sport Touring in the mid-$20k range and at that price, this little SUV is a smokin’ deal.

The Exterior
On the outside, the 2017 Buick Encore AWD Sport Touring looks a great deal like the rest of the lineup, but the Sport Touring trim includes a few unique features – such as the low-profile rear spoiler and the 18-inch wheels. This package also comes standard with the LED-trimmed headlights, LED taillights, fog lights, chrome trim on the door handles, window surround, grille surround and exhaust tip, and the silver low fascia areas (found on several models) which just naturally give the Encore a sportier look.

The front end of the Encore was refreshed for the 2017 model year and while I liked the previous front end, I love the new look. The simple addition of the LED-trimmed lighting presents a much higher-end look, but with signature lighting being so common in performance models – the new headlights lend themselves to the sporty feel as well.

The Interior
The cabin of the 2017 Buick Encore AWD Sport Touring is where it really gets interesting. The 8-inch infotainment screen is standard, with touchscreen capabilities, a few dedicated “hard controls” mounted just below the screen and steering-wheel controls for the driver – including the voice control button. The driver won’t need to remove his or her hands to set/adjust the cruise control system or to change the radio station, but those adjustments which do require the touchscreen are straightforward and the system as a whole is very user-friendly. Further down the center stack, below the infotainment touchscreen, is the HVAC panel with simple knobs for the dual climate control system and buttons for the direction of the air flow – making temperature adjustments beautifully simple. Also standard in the 2017 Buick Encore Sport Touring is the 4.2-inch driver information screen in the gauge cluster, nestled neatly in the center of a quartet of analog gauges. This central screen allows the driver to pick through a variety of information, while leaving the engine RPM, vehicle speed, fuel level and engine temperature displayed at all times. Included in the display options are navigation directions, trip mileage, what is playing on the radio – with the tunes booming through the high quality Bose speaker system. Finally, the Encore Sport Touring comes with front and rear seats which feature cloth center sections with leather-trimmed outer portions. When combined with the leather-wrapped steering wheel, the leather shift boot and the spread of satin silver trim found throughout the cabin, the Encore Sport Touring has a premium feel, even without the full-leather seats. More importantly, the front and rear outboard seats off a solid amount of passenger space, allowing taller adults to drive or sit comfortably at any of the main seating positions, although very tall adults are likely to find the foot room to be a little tight in the back seat when the front seats are moved back to comfortably seat taller people up front as well. That being said, this small SUV will very comfortably seat two adults and two-three kids with plenty of room for cargo in the back, so this is an ideal option for a young family.

The Drive
Someone who doesn’t have much experience with the modern Buick lineup or modern small SUVs might look at the 2017 Buick Encore AWD Sport Touring and think that a low-cost, compact SUV from Buick cant be a whole lot of fun to drive – but they would be wrong.

This Encore is powered by a 1.4L turbocharged engine which delivers 138 horsepower and 148lb-ft of torque, which doesn’t sound like a whole lot, but those figures make this small SUV surprisingly spry. With the help of the 6-speed automatic transmission, the Encore accelerates smoothly from a stop, and while I don’t foresee many people going drag racing with the small Buick SUV, the 1.4L mill provides solid motivation for the vehicle. If you hammer the throttle from a stop, the turbo takes just a bit of time to spool up and build proper boost, but the Encore quickly gets up to any posted speed in Metro Detroit. Also, when cruising on the highway, the 1.4L turbo doesn’t have to work very hard to maintain 70mph, allowing this roomy little SUV to get better than 30mpg on the open road. Also, if the need arises to speed up in a hurry to scoot around slower-moving traffic, the Encore’s 4-cylinder mill is up to the task. Acceleration aside, the 2017 Buick Encore AWD Sport Touring is a great vehicle for the daily drive. Around town and on the highway, the suspension system does a great job of absorbing bumps in the road, but as small SUVs go, it also handles nicely when breezing through a section of twisty backcountry roads. Also, thanks to the small stature of the Encore, it is easy to navigate tight spaces and it is even easier to park in the most unhospitable public lots that Detroit has to offer.

The Final Word
If you want a small SUV that offers a premium look on the outside, premium features on the inside, a powerful-yet-efficient engine, space for a small family and a price tag in the high-20s to low 30s, the Buick Encore AWD Sport Touring is the best choice on the market right now. Available discounts will bring my price-as-tested well below the $30k mark and for those folks who want a little more luxury – perhaps adding heated, leather seat – the higher-end Encore models are subject to the same discounts as my test vehicle. This means that you might be able to get a more heavily-appointed Encore for a similar price to the MSRP of my test vehicle, but for those who like the sound of my Sport Touring AWD test car, this is a remarkable deal with current discounts. Finally, for those wondering, in looking around a few different areas, the 2017 Buick Encore appears to be readily available in multiple trims. With the 2018 calendar year only about 5 weeks away, this is a great time to score a smokin’ deal on one of these 2017 Encores.