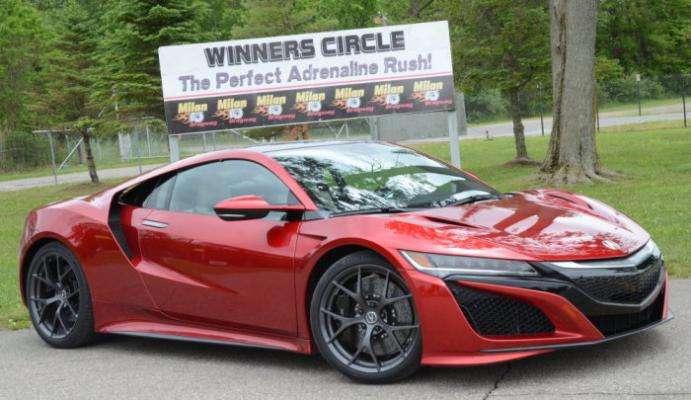 I recently had a chance to spend a few hours driving the 2017 Acura NSX on the open road and on the drag strip, which clearly illustrated the advantages of the hybrid supercar drivetrain in fantastic fashion.
Advertisement

I have been drag racing since before I was old enough to drive, so when the folks from Acura invited me to come to Milan Dragway in Michigan, I jumped on the opportunity. I have raced all sorts of vehicles, from AWD SUVs to RWD muscle cars to high performance FWD sport compacts, but I have never made a pass in a hybrid supercar. In fact, I hadn’t driven a car with a drivetrain like the Acura NSX, so while I was looking forward to testing a supercar on a drag strip – I was just as excited to experience a hybrid supercar drivetrain in action.

The NSX did not disappoint.

This unique drivetrain allows the new Acura NSX to offer better fuel economy than other performance cars with similar power while also allowing for some all-electric driving. More importantly to me, this combination of the twin turbo V6 at the rear wheels and the electric power at the front wheels leads to incredible traction and stunning acceleration figures.

With 0-60 capabilities in the 2.7-3.0 range, the 573hp new NSX will comfortably out-accelerate many performance cars with far more horsepower. For example, the Dodge Challenger SRT Hellcat with 707hp and 650lb-ft of torque will dash from 0-60 in the 3.5-3.7 second range and the Chevrolet Camaro ZL1 with 650hp and 650lb-ft of torque is in that same ballpark. Both of those cars pack far more horsepower and torque, but they are traction limited with their rear-drive layouts, so although the NSX has far less power – the advantage of AWD and the instant torque of the hybrid drive system makes it a far quicker car.

This was likely why Acura invited us to come to Milan Dragway to experience the new NSX, as in addition to being quick from 0-60, it is also a beast on a quarter mile drag strip.

Quarter Mile Runs in the NSX
When making our quarter mile test runs in the 2017 Acura NSX, we did so in Track mode, which enables the Launch Control System. This system engages automatically simply by pushing the brake pedal to the floor followed by pushing the accelerator to the floor, preloading the drivetrain for the best launch possible. When you want to launch, you simply let off of the brake pedal and the new NSX rockets away from the starting line.

While there might be some boost lag with the 3.5L twin turbo V6, the three electric assist motors powering the front wheel deliver instant torque to get the car moving while the gasoline engine works up to peak performance. As a result, the NSX gets off of the line in a hurry, but as you continue down track in the newest Japanese supercar, it just pulls harder and harder through the top end of the quarter mile track. The launch forces are impressive, but the fact that the NSX keeps you pinned back in the seat for the entire quarter mile is what really puts a smile on your face.

Just how quickly does the 2017 Acura NSX get through the quarter mile? Well, many outlets report times in the 11.2-11.3 range and I saw plenty of that while watching others drive the new supercar at Milan, but after three runs, I had managed to lay down a time of 11.19 seconds at 123 miles per hour. That is the quickest quarter mile time that I have turned with any stock test vehicle and I did so with only three runs, while spinning the tires a bit on launch.

That brings me to the final aspect that I learned while driving the 2017 Acura NSX – it is remarkably easy to drive. Between the Launch Control system, the surefooted nature of the hybrid AWD system and the lightning quick automatic transmission, the new NSX makes running low 11-second quarter mile times incredibly simple, whereas getting those kinds of times from a Hellcat Challenger or a Camaro ZL1 will take plenty of drag racing experience. While some people at this drive event ran slower times, the slowest times that I saw were in the 11.40 range, which will still give almost any new car in America a run for its money.

The new Acura NSX might not pack as much power as some of the other high performance vehicles sold in the US, but the hybrid AWD drivetrain allows the new NSX to make great use of all of that power in a way that you simply cannot experience from a non-hybrid AWD car or any RWD car.

More than a Drag Car
I am sure that people are reading this, wondering why we are even talking about making drag strip passes with the Acura NSX. After all, this is a supercar designed to carve the corners on the world’s toughest road course, but this experience showed that those folks shopping for a supercar with drag racing in mind might want to check out the new NSX. It isn’t built for drag racing, but it is mighty good at drag racing – while packing awesome acceleration forces in any driving situation.

For those of you who want to read more about how the new Acura NSX handles on the road and the road course, click here to read the full first drive review from the TorqueNews Acura expert, Parks McCants.

Parks McCants wrote on June 15, 2017 - 11:17pm Permalink
Thank you my friend for the mention. The first time I drove NSX, I too asked the question: Why option a "launch mode" in a hybrid supercar? I believe you answered the question. A great read Patrick.

For Some Former Daimler Managers Daimler Is Authority, While Tesla Is Like a Startup
How Daimler Unintentionally Subsidizes Tesla Giga Berlin
END_OF_DOCUMENT_TOKEN_TO_BE_REPLACED