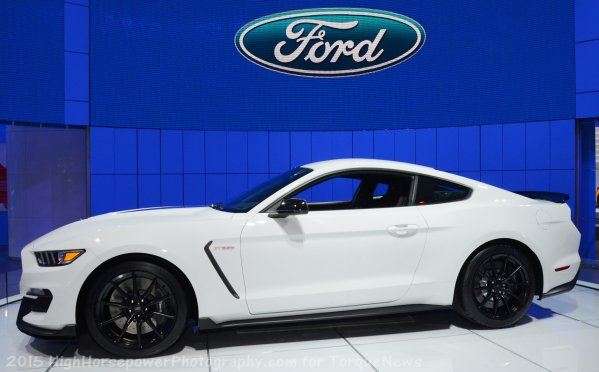 The 2016 Shelby GT350 Mustang will be far easier to get your hands on than the ultra-limited edition 2015 GT350 and according to a new report, Ford dealerships are finding out right now just how many examples of the 2016 GT350 Mustang they will get – meaning that your local dealership might know how many they are getting and allowing prospective buyers to put money down on their new super-Stang.
Advertisement

Earlier this week, we were talking about the limited edition 2015 Shelby GT350 and GT350R Mustangs that will be available in very limited numbers, with only 100 of the GT350 and 37 of the GT350R made for the 2015 model year. These cars will likely be very expensive and very hard to get, but it is expected that Ford will build thousands of new Shelby GT350 Mustang models for the 2016 model year. Rumors have indicated that there could be 5,500 examples of the 2016 GT350 and GT350R for 2016, so they will be much more acquirable than the 2015 models, but these new high performance Mustangs will likely be tough to get – especially early on in the ordering process.

I have been getting emails for a few months now asking if I had any information on how Ford would allot the 2016 Shelby GT350 Mustang and according to the folks at Ford-Trucks.com, the Motor Company has already told some dealerships how many new Shelby Mustangs they can expect to get when they begin shipping from the Flat Rock plant.

2016 Shelby GT350 Allotment
According to Ford-Trucks.com, a dealership which did not want to be named received a letter from Ford Motor Company telling them that they would be receiving 2 examples of the 2016 Shelby GT350 Mustang. We do not know if this specific dealership was large or small, so we do not know if this is an average allotment or a low allotment for one dealership. Really, this piece is about the fact that an unspecified dealership is only getting two 2016 Shelby GT350 Mustang fastbacks but rather, this piece serves to let Mustang fans and prospective buyers that their local Ford dealership might know how many examples of the new Shelby they will be receiving.

No Official Allotment Word from Ford
Ford Motor Company has not yet offered any indication as to how they plan to figure out which dealerships will get how many examples of the 2015 or 2016 Shelby Mustang, but I would expect that the allotment would be planned around recent Mustang and Shelby Mustang sales figures – at least for the higher volume 2016 models. The dealerships that sell the most Mustangs and possibly the most Shelby GT500 Mustangs will likely have the best chance of getting the most copies of the new Shelby Mustang, meaning that the cars could be very hard to get in some areas while being available in others.

Should any new information surface on the allotment or distribution of the 2015 or 2016 Ford Shelby GT350 Mustang, you will find it here on TorqueNews.com.