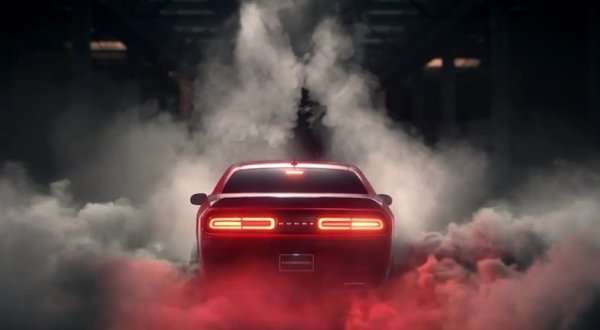 The 2016 Dodge Challenger Turns a Burnout into Art (Video)

The 2016 Dodge Challenger is the subject of the newest commercial for the high performance brand, with the modern Mopar muscle car performing a massive burnout and turning the smoke show into a computer generated work of art.
Advertisement

The Chrysler Group has rolled out quite a large spread of commercials for the Dodge brand lately, but the newest focuses specifically on the 2016 Challenger. More specifically, the new commercial focuses on the ability of the Dodge Challenger to do a massive, smokey burnout and with the help of some computer magic at the end of the video, the smoke comes together to create Ronnie James Dio’s heavy metal horns.

We cannot see any badging on this Dodge Challenger and the commercial details don’t specify the trimlines, but the small spoiler on the back appears to be the one found on the SRT Hellcat Challenger. Also, towards the end of the video, if you turn up the sound, I believe that I can hear the whine of the Hellcat supercharger. Finally, while all of the new Challengers will roast the rear tires, none will do it as effortlessly as the big, bad Hellcat, so while this could be the SRT 392 or the Scat Pack – it sounds like a 707 horsepower Hellcat Challenger to me.

Regardless of the engine under the hood of the 2016 Dodge Challenger in action here, this Mopar muscle car does a wicked burnout that lasts the duration of the 30 second commercial. In the end, when the smoke runs out of space and rises up around the car, the “metal horns” is formed in front of the Challenger with the message “Unleash your inner badass”.

The Chrysler Group is continuing to aggressively position Dodge as a high performance brand and with commercials like this – and cars like the Hellcat Challenger – prospective buyers don’t have to think twice about the intended function of this modern muscle cars.
To most people, Performance Arts are things like ballet or the circus. To car guys, this Challenger Hellcat is putting together the best performance art of all – the art of tire shredding.

David Dandy wrote on May 7, 2016 - 8:53am Permalink
From looking at the spoiler alone it looks to me like a SRT 392 or a Scat Pack. I believe the Hellcat spoiler is more of a straight across type .