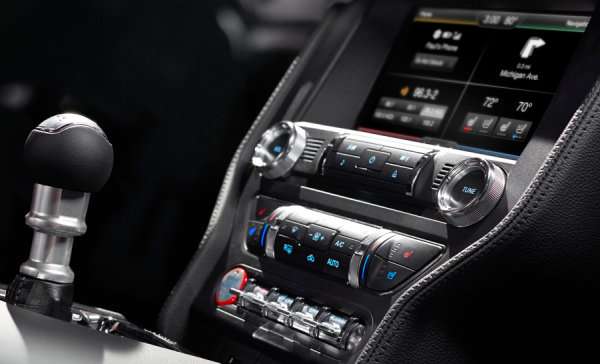 The 2015 Ford Mustang is promised to be the most technologically advanced Mustang of all time and to give the S550 an advantage even compared to other Ford Motor Company vehicles – the 2015 Mustang will be the first vehicle to feature the next generation Sync infotainment system.
Advertisement

Ford Motor Company has been on the leading edge of connectivity technology since introducing the first Sync system a few years back but with criticism from the technologically inept, Ford continues to improve on the Sync system and the first evidence of those improvements will come with the 2015 Ford Mustang. The new Ford Sync Applink in the 2015 Mustang is promised to be easier and quicker to use when on the move with an enhanced voice control system.

Ford led the industry in giving drivers the ability to control their smartphone apps on the go with the introduction of SYNC AppLink in 2010,” said Raj Nair, Ford group vice president, global product development. “We are now making the in-vehicle app experience simpler and more intuitive to further help drivers keep their hands on the wheel and eyes on the road.”

The key feature of the new Sync system launching in the 2015 Ford Mustang is the easier-to-use in vehicle menus which allow the driver to access applications by pushing the Sync button on the steering wheel. The driver pushes this button and that requests the app desired and the new Sync system will located it. This new system is expected to be much smoother for the driver to use with a voice control system that should be far more reliable than the current system – which is already pretty good as modern systems go. This new system will also include apps that offer real time vehicle data such as speed, acceleration and location so the Track Apps system may be far more advanced than the current setup – or at least more accurate with the introduction of this new Sync system. Finally, the new SYNC system will read any notifications that you receive on your mobile device while driving anytime your phone is connected to the Mustang’s Bluetooth connectivity system.

“Our goal with AppLink has always been to let drivers take advantage of the information, news and entertainment apps they value most,” said Doug VanDagens, Ford global director of connected services. “The new version of AppLink gives developers even more tools to help deliver a seamless app experience.”

The new Ford Sync Applink will debut as standard equipment on the all 2015 Ford Mustangs but following the launch in the new muscle car, this new infotainment system will become available across more vehicles in the Ford and Lincoln lineups. This new Sync system will join other standard Mustang features like Launch Control, Track Apps, Advanced Drive Assist systems and a range of power yet efficient engines – all of which help make the 2015 Mustang the most advanced Ford muscle car ever.

While Ford has received some complaints from those who arent computer savvy enough to figure out the S550 Mustang's MyFord and SYNC systems, I have experienced the current version in a variety of different vehicles and I find Ford’s system to be one of the best on the market. These changes made to the next generation system should help to make for a better experience for those who do understand how to use it while perhaps making it a little easier for critics to figure out how to use the system.