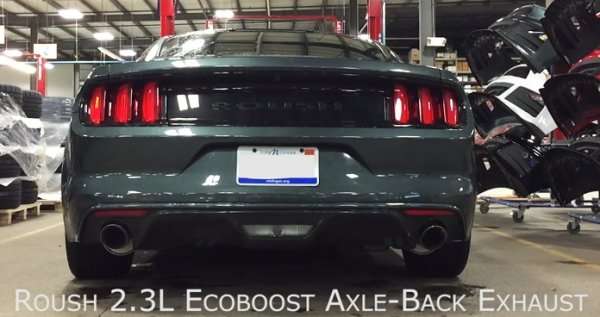 The 2015 Ford Mustang EcoBoost brings a whole new type of buyer into the pony car family and the new Roush cat-back exhaust system for the next generation Mustangs powered by the turbocharged 2.3L 4-cylinder is an incredible upgrade for those owners looking to let their modern turbo Mustang clear its throat just as loudly as the V8 cars.
Advertisement

I want to start this piece by heading off the people who will rush to the comment section to declare that the 4-cylinder isn’t a proper Mustang or that it doesn’t sound like a proper American performance car. The 2015 Mustang GT is the stereotypical American performance car and it is awesome, but some people are going to buy the Mustang EcoBoost as a performance car and with 310hp and 320lb-ft of torque, it is hard to knock the performance capabilities of the EcoBoost engine. Those people who buy the EcoBoost Mustang for performance know ahead of time that their Mustang won’t sound like the Mustang GT. However, those buyers who plan to modify the EcoBoost Mustang for improved performance will likely want it to sound a little more authoritative – and that is where Roush swoops in to save the day with their newest cat-back exhaust system for the 2015 Mustang EcoBoost.

The 2015 Mustang EcoBoost Exhaust Note
This past summer, I took a ride in a preproduction Ford Mustang EcoBoost and while doing so, I had my camera rolling. I was one of the first people to catch the exhaust tone of the EcoBoosted Mustang and because of that, a great many sites linked to my exhaust video. However, we learned soon after that some of that turbocharged engine sound was actually piped through the sound system and in reality, the EcoBoost Mustang doesn’t have all that much bark to prepare you for its bite. There is a little grumble and the faint “whirr” of the turbocharger, but in comparison to other higher performance cars with turbocharged 4-cylinder engines, the sound of the 2015 Mustang EcoBoost falls a little flat.

The video below shows a 2015 Ford Mustang EcoBoost revving the engine with the stock exhaust before moving onto another clip of the same car with the Roush exhaust – showing the incredible contrast between the two.

The Roush Exhaust for the EcoBoost Mustang
The stock exhaust system on the 2015 Ford Mustang EcoBoost is designed to offer a little grumble, but Ford designers were likely careful to avoid it sounding too much like many of the foreign import performance cars sold in the USA. Muscle car owners have long mocked the import crowd for the higher pitched, nasal sounding exhaust tone that is present in almost every high performance 4-cylinder engine – turbocharged or not.

The Roush cat-back for the Mustang EcoBoost gives the exhaust a deep, throaty tone that is significantly louder than stock, while also amplifying the whistle coming from the turbocharger. While the Mustang fitted with the Roush exhaust sounds unlike any other Mustang in the past, this is the type of exhaust system that someone buying the EcoBoost Mustang to go fast is going to want. Honestly, while I prefer the rumble of my American V8 – I love the sound of the EcoBoost Mustang with the Roush exhaust. It sounds much better than a V6 Mustang will free flowing exhaust, although it does have the expected tone that you get with a 4-cylinder engine.

Crank up your speakers and enjoy – or prepare to hate it if you insist that all muscle cars should have a throaty V8 or nothing.

muman613 wrote on February 4, 2015 - 8:10pm Permalink
Just brought the 2015 Mustang 2.3L 4-cyl EcoBoost and I love it. I have had several Mustangs in recent years including a 2005 GT (totalled in accident) and a 2007 GT (replaced previous GT and blew engine early Jan 2015)... I replaced my last GT with a beautiful Blue EcoBoost. I love the performance although it doesn't have the sound of the GT's engine. This exhaust modification just may be what I need.
nick wrote on February 5, 2015 - 9:29am Permalink
sounds like a dirt bike XD
Mike wrote on February 5, 2015 - 12:11pm Permalink
Sounds like tractor or a chainsaw with a lower pitched exhaust. I do like it better than the stock exhaust which barely makes much sound at all.
james wrote on February 5, 2015 - 8:44pm Permalink
Wow that's horrible! Reminds me of my rusted out 84 corolla
Rick Collins wrote on February 8, 2015 - 3:35am Permalink
It sounds like a old 1952 farm truck.
Charlie wrote on February 8, 2015 - 7:17pm Permalink
Sounds exactly like the stock exhaust on a 2008-2010 Cobalt SS Turbocharged (2.0L LNF engine, direct injected Borg Warner K04 with up to 20 psi stock, 25+ psi with the GM Stage 1 kit).
Tango wrote on April 15, 2015 - 1:53am Permalink
This videos are great except I don't plan to just sit and rev my engine and charge admission to hear it. I want to hear what it sounds like driving by and in the drivers seat (accelerating, and at freeway speeds etc). It may sound like music doing this (maybe not) but it might also be an intolerable drone at 70MPH (which I spend more time doing than sitting revving the engine) making you wish you never modded it.
Tstang wrote on June 17, 2015 - 4:57pm Permalink
yeah, I have an ecoboost stang, and I love it. Drives like a dream. But this exhaust kit makes it sound like a lawn mower. Waiting for Ford Racing to give me something better.