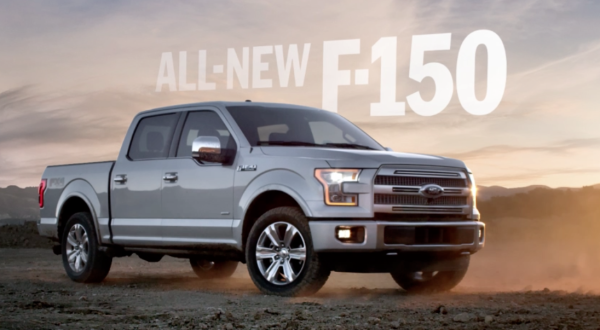 The first television commercials showing off the 2015 Ford F150 will debut during the NCAA college football bowl playoff series, allowing the Motor Company to introduce the next generation pickup to one of the biggest TV audiences of the year.
Advertisement

The 2014 college football season marks the first time that the Division 1 teams will have a playoff to decide the national champion and with this series of three games likely drawing one of the biggest television crowds of the year, Ford Motor Company will use this truck-friendly crowd to show off the 2015 F150. Not only will this be a huge TV crowd, but it will also be one chock full of prospective truck buyers and current owners who could consider the 2015 F150 to replace their current truck.

The first group of 2015 Ford F150 television ads includes three spots with the voiceover work provided by comedian Denis Leary – two measuring 30 seconds and one that will run for a full minute. The shorter ads are titled “What’s Next” and “Move It” while the 60 second spot is named “Forward March”. These ads will officially debut on Wednesday, December 31st during the Peach Bowl, which pits the #6 ranked TCU Horned Frogs against the #9 ranked Ole Miss Rebels at 12:30pm EST on ESPN.

The bigger stage for the new F150 will come the next day when the big crowds tune in for the college football championship playoff semifinal games with Oregon playing Florida State on ESPN at 4pm EST and Alabama playing Ohio State on ESPN at 8:30pm EST. The winner of these two games will meet on January 12th for the College Football Championship Game and that game will begin at 8:30pm EST. I would expect that we will also see these 2015 F150 commercials during the big game on the 12th in addition to the debuts on January 1st.

Surprisingly, Ford Motor Company will not be running a 2015 F150 ad during the NFL’s Super Bowl on February 1st, 2015. Ford hasn’t announced whether they will have a Super Bowl commercial for any of their other vehicles, but they definitely won’t be advertising the new F150 according to Automotive News. This comes as a big shock, considering that the NFL crowd should be just as truck-friendly as the college football crowd, but with the massive amount of attention being paid to the first ever NCAA Division 1 football playoff championship series, it may be a better spend of the advertising money to show off the 2015 F150 during the final games of the 2014 bowl series than during the single championship game for the NFL.

Online 2015 F150 Campaign
In addition to traditional television marketing, the 2015 Ford F150 will be shown off in a series of webisodes with ESPN Sport Science host John Brenkus, appropriately named “F-150 Tough Science”. These web-bound videos will showcase some of the most significant features of the 2015 F150, including special emphasis on the new aluminum body panels.