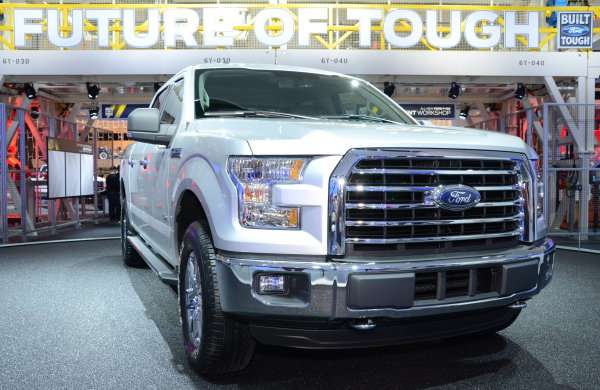 The jurors for the North American Car and Truck of the Year award have announced their short list and, not surprisingly, both the 2015 Ford F150 and the 2015 Ford Mustang are included – and I fully expect to see Ford Motor Company claim both titles with their groundbreaking half ton pickup and sports car.
Advertisement

Each year, the North American Car and Truck of the Year jurors start with a long list of cars, trucks and SUVs that will be sold in the United States for the upcoming model year and from that list, they compile their short list from which the finalists will be chosen. The 2015 short list was announced yesterday and among the ten cars and twelve trucks/SUVs are the 2015 Ford F150 and the 2015 Ford Mustang – two vehicles which I believe stand a very real chance to winning their respective classes and giving Ford both of the prestigious awards for the 2015 model year.

In the car class, the Mustang is joined by the Chrysler 200 to represent the USA, while three cars represent Japan, three cars represent Germany and two cars represent South Korea. There is also a nice spread in car type, with the tiny and affordable Honda Fit doing battle with the mighty Ford Mustang and the high dollar Mercedes Benz C-Class. The full car short list is below, listed alphabetically with their country of origin and vehicle type for those who aren’t sure.

2015 North American Truck of the Year Short List
Over in the Truck/Utility short list, we have slightly less diversity among countries of origin, but we see even more diversity among the types of vehicles. Joining the Ford F150 in representing the United States are the Chevrolet Tahoe, the GMC Canyon, the Chevrolet Colorado and the Lincoln MKC. From Germany, we have three SUVs while Japan offers up three SUVs and what many Americans would call a station wagon.

In total, this class is comprised of 8 SUVs, 3 pickup trucks and the 1 aforementioned wagon with the spread ranging from the Subaru Outback to the Porsche Macan, but this year’s list is clearly dominated by the smaller luxury SUVs. The full truck short list is below, listed alphabetically with their country of origin and vehicle type for those who aren’t sure.

As for the 2015 Ford Mustang, it might not have the broad sales appeal of the 2015 F150, but the Mustang is one of the vehicles that defines the American auto industry. Even if it was simply a new generation Mustang, I would expect it to be a front runner for the 2015 NACOTY award, but when you consider the fact that this 2015 Mustang is designed to dominate on a global level – I see no way that it cannot win.

I have no connection with the North American Car and Truck of the Year awards, but my safe money says that Ford Motor Company takes both titles with the new F150 and Mustang.