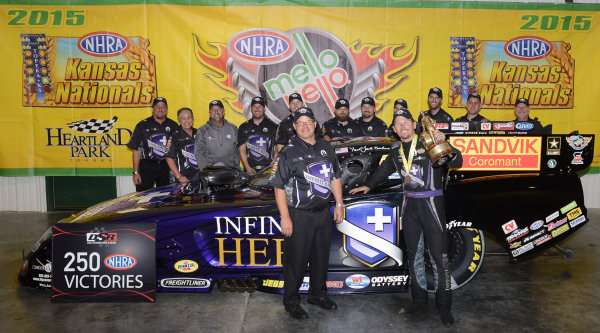 The 2015 Dodge Charger funny car continued its dominance of the NHRA Mello Yello Drag Racing Series this past weekend in Kansas, as Jack Beckman beat the Chevrolet Camaro driven by the legendary John Force in the finals – Beckman’s second win of the year and the sixth in eight events for the 2015 Charger.
Advertisement

Coming into the Kansas Nationals, the 2015 Dodge Charger R/T teams had dominated the funny car class, winning 5 of the first 7 races and regularly being the fastest cars in the field. That trend continued in Kansas, with Jack Beckman taking down John Force in an awesome drag race, but more importantly, Beckman’s win moved him into the 3rd spot in the championship standings – allowing 2015 Charger teams to control each of the top 3 spots.

Qualifying
While the 2015 Dodge Charger R/T funny cars have often been among the quickest cars in qualifying this season, the Dodge teams didn’t get the start that they wanted in Kansas. There were five Chargers in the funny car field, including Jack Beckman, Tommy Johnson Jr, Ron Capps, Matt Hagan and John Hale, with Beckman, Johnson, Capps and Hagan running the 2015 Charger body while John Hale is still running the 2014 Charger body. All five of those drivers qualified for the 16 car field, but the best qualifying Charger was that of Ron Capps in the 4th spot. Jack Beckman was 6th quickest, Matt Hagan was 8th, Tommy Johnson Jr was 12th and Hale was 14th quickest.

It should be noted that while the Charger teams didn’t have the best qualifying efforts, they faired a little better than did the Chevrolet Camaro funny cars of John Force Racing, with John Force grabbing the 5th spot while daughter Courtney and teammate Robert Hight settled for the 11th and 9th spots, respectively.

Eliminations
In round 1 Matt Hagan squared off with the Chevrolet Camaro of Robert Hight and after the Chevy grabbed the starting line advantage, traction troubles down-track gave Hagan the win. Ron Capps took a starting line advantage and stretched it into a beating of Brian Stewart, John Hale managed to nip Cruz Pedregon at the finish line and Jack Beckman’s blistering quick 3.984 run gave him the win over Courtney Force’s Camaro. Unfortunately, Tommy Johnson Jr gave John Force a great run, but his Charger came up short – sending John Force into the second round as the only remaining Camaro while four Dodge teams continued on.

In round 2, Matt Hagan knocked out top qualifier Chad Head when Head’s Toyota faded on the top end and when John Hale’s Charger broke, Jack Beckman got the easy pass to round 3 – even though he still ran another sub-4 second run, stopping the clock with a 3.972 in the Mopar-on-Mopar battle. Ron Capps went head to head with John Force in a battle of the 4th and 5th quickest qualifiers, and Force turned a starting line advantage into a big win for his Chevy.

In the 3rd round, Matt Hagan’s 2015 Dodge Charger took on John Force’s 2015 Chevrolet Camaro while Jack Beckman’s 2015 Dodge Charger took on Del Worsham’s 2015 Toyota Camry. Force and Hagan had a great run, with nearly identical reaction times, but once again, Force’s Camaro knocked off the Charger R/T. On the other side of the bracket, Beckman had a starting line advantage and when Worsham ran into issues on the top end, the Charger was sent onto the finals for a Dodge-vs-Chevy battle with John Force.

The Finals
In the final funny car race of the Kansas Nationals, Jack Beckman took an early starting line advantage over John Force, but the Force Camaro quickly began closing. Fortunately for Beckman, he got his Charger to the line before the Camaro could catch up and Jack Beckman scored his second win of the season.

In addition to being Beckman’s second win of the season, the Kansas Nationals final win gave Don Schumacher Racing its 250th victory as a team.

Season Standings
After the Kansas event, Ron Capps leads the funny car points race with Matt Hagan just 5 points behind. Beckman now sits 3rd (49 points back of the lead) while Del Worsham is 4th (73 back) and John Force is 5th (78 back).

rodzilla wrote on May 27, 2015 - 3:03pm Permalink
Since all funny cars are all pretty much the same, below the body (including the actual body, as far as that goes), can one really say that Brand X did better than Brand Y? I am a total Mopar fan, but I still can see reality. One car's advantage is based on the team's tuning, the driver's reactions, and individual lane condition. Maybe add a bit of luck.
sakyi benjamin wrote on May 29, 2015 - 9:32am Permalink
all what i wanna say dodge is my car i love cars and am good when it comes to car besides i draw shape of car desiding to own it by my self i wanna b a part of a company working in my whole entire life i wanna be a good driver like paul walker van dieseland jason statham basically i wanna king drifter i dream of and i think i cant cos am in Ghana i want help please