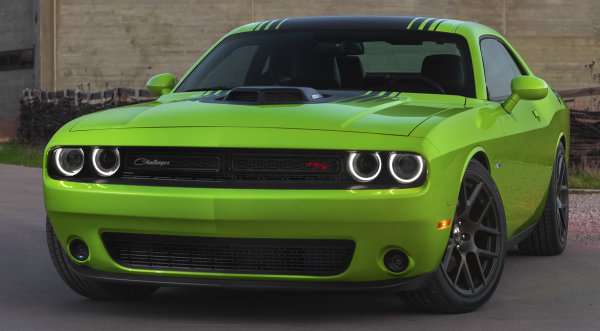 After much anticipation, the 2015 Dodge Challenger made its Big Apple debut this morning and while there are some exciting bits of information on the engine lineup and a stylishly revised exterior and interior for 2015 – the 600 horsepower supercharged Hellcat Hemi has gone unmentioned.
Advertisement That’s right, the 2015 Dodge Challenger can be fitted with the 6.4L Hemi with 485 horsepower and 475lb-ft of torque in two new trimlines – the 6.4-liter Scat Pack and 392 HEMI Scat Pack Shaker. These new non-SRT Challengers powered by the 392 cubic inch Hemi get a slight bump of 15 horsepower and 5lb-ft of torque over the current (2014) SRT Challenger, with this power being sent to the rear wheels by means of a standard 6-speed manual transmission or an optional 8-speed automatic. Chrysler claims that the Scat Pack Challengers packing the automatic transmission will actually be the quicker option, with a 0-60 time in the mid 4 second range, a quarter mile time in the low 12 second range and a top speed of 182 miles per hour. Also new to the 2015 Dodge Challenger lineup is the Shaker hood that was offered in limited numbers on the 2014 Challenger Shaker and the Mopar 14. Those buyers who are picking the R/T, R/T Plus or Scat Pack Challenger can add the Shaker hood package, which also adds the unique Shaker graphics, sport seats, the Super Track Pak suspension setup and high performance Goodyear Eagle F1 tires.

The 2015 Dodge Challenger in SXT or R/T trim will come with the same 3.6L Pentastar of 5.7L Hemi as the current models, with the power outputs remaining the same as well (305hp V6, 375hp Hemi). However, these models should all be a touch quicker thanks to the new 8-speed automatic that is standard for the V6 Challenger and optional for the 2015 Challenger R/T lineup. The 2015 Dodge Challenger was expected to get an exterior refresh and while it is far more subtle than many expected, it is a great evolutionary change. The 2014 (and prior) Dodge Challenger was designed with inspiration from the 1970 Challenger so it makes good sense that the refreshed 2015 Challenger borrows some design cues from the 1971 Challenger. This includes a unique split style grille up front which is flanked by revised headlights with halo accents around the main lighting units while the back end also wears a dual light setup. As expected, the 2015 Challenger calls upon the racetrack LED taillight that is used on the Dart, Charger and Durango, but the Challenger’s dual track design differentiates it from the other models in the Dodge lineup. Really, other than the new grille, the new headlights and the new taillights, the 2015 Challenger doesn’t look all that different from the current models. On the inside, the 2015 Dodge Challenger has been much more heavily refreshed, beginning with the redesigned dash that features the 8.4 inch infotainment screen in the middle and the gorgeous driver information center with a 7 inch thin film transistor screen tucked between the analog speedometer and tachometer. There is also a new 3 spoke steering wheel and a center shift console with a “dug out” design, also similar to the vintage Challenger center console.

The 2015 Dodge Challenger should enter production during the 3rd quarter of 2014 with deliveries beginning sometime in the final few months of the year. In the meantime, click any of the thumbnails above for a closer look at the 2015 Challenger R/T Shaker inside, outside and under the hood.