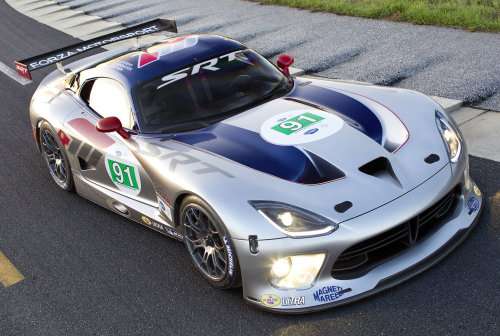 Everyone knew that the new 2013 SRT Viper would make its debut this week at the 2012 New York Auto Show but SRT CEO and President surprised the motorsports world when introduced the new SRT Viper GTS-R – a purpose built race version of the new Viper destined for the ranks of the American LeMans Series (ALMS).
Advertisement

The Dodge Viper GTS was a monster in the LeMans racing world through the late 1990s and early 2000s so it is fitting that with the introduction of the 2013 Viper GTS, the SRT Motorsport division would introduce a LeMans racer based on the newest Viper. In cooperation with Riley Technologies of Mooresville North Carolina, the SRT team designed and built the great looking Viper GTS-R race car shown on the right sporting the race livery of Forza Motorsport 4 –fittingly wearing the same #91 that the championship Viper GTS-R teams of the late 1990s piloted to wins around the world.

SRT will offer two teams for the 2012 American Le Mans Series season in the production based GT class with two experienced championship drivers signed for each of the new Viper factory race teams. SRT hasn’t stated how the teams will be arranged but the current four drivers that will be strapped into the 2013 SRT Viper GTS-R racer cars this season are Dominik Farnbacher from Germany, Marc Goossens from Belgium, Ryan Hunter-Reay from Dallas, Texas and Kuno Wittmer from Montreal, Canada. (The bios for each of these drivers are available below, courtesy of Chrysler) The company also mentions that there could be more team and driver announcements along the way.

“Racing has been a significant part of the illustrious history of Viper not only with wins on the track, but also in the continued development of the street cars – and our new 2013 SRT Viper models are proof of those lessons learned,” said Ralph Gilles, President and CEO – Street and Racing Technology Brand and Motorsports, Chrysler Group LLC. “Now with our new team and the launch of the GTS-R, we’re excited and proud to begin writing more chapters in the racing history of the Viper later this summer.”

Unfortunately, Chrysler’s presser announcement of the 2013 SRT Viper GTS-R didn’t include any information as to the construction or powerplant of this new Viper race car. When we hit up some of our Chrysler contacts, we were given the statement to “stay tuned for more information” so at the moment; the company is keeping hush about the specs of the new Viper GTS-R. Just from looking at the images in the gallery on the right, we can see that the GTS-R gets a much larger front fascia, a unique hood with much deeper vents and a larger air intake, special single-lug wheels and some extra openings on the side of the car for exhaust ports and brake duct vents. The GTS-R also wears much larger fog lights than the road version of the 2013 SRT Viper along with a widebody kit. It might be hard to notice how wide the body of the new LeMans racr is due to it looking so much like the production road version, but when you look at the back end images of the GTS-R you can see that the race car body is quite a bit wider. Finally, there is that massive wing out back that is the norm for ALMS race cars.

We can guess that the interior of the car is stripped down to just the bare essentials and that there is a modified version of the 8.4 liter V10 engine that provides 640hp in the 2013 SRT Viper and Viper GTS. However, we don’t know what kind of power the GTS-R makes, what type of transmission of what size engine is under the hood but with the ALMS season underway; it shouldn’t be too long before we see the new Viper on the race track. Neither SRT nor the ALMS have stated when the Viper will arrive in the seasons but with the next race of the 10-race season just 8 days away – perhaps we will be getting a closer look at the new Viper in action sooner than we think. That race is the Tequila Patron ALMS at Long Beach on April 13-14 followed by the American LeMans Monterey starting on May 10th.

TorqueNews will keep you updated on the progress and success of the new SRT Viper GTS-R race program. IN the meantime, check out the pictures in the gallery on the right for a closer look at the new Viper race car and the video below offers a look at highlights of the new Viper debut in New York.

Those of you out there who are into gaming, the 2013 Viper will be coming to Xbox 360’s Forza Motorsport 4 and with the sponsorship of the GTS-R race cars, we can expect to see the race version of the Viper in the driving simulator at some point as well. Click here for more on the Viper Pack for Forza 4.

Driver biographies for the new SRT Viper GTS-R race program as provided by Chrysler:
Dominik Farnbacher
• Born Sept. 26, 1984, in Ansbach, Germany, where he currently resides
• Competed in 2012 Rolex 24 at Daytona with TRG Motorsports
• Has seven career starts in the Rolex 24 at Daytona (2009-2012, 2005-2007)
• Won 2005 Rolex 24 at Daytona GT class alongside co-drivers Wolf Henzler, Shawn Price and Pierre Ehret
• Grew up in an auto racing family watching father Horst Farnbacher compete in Europe
• Is a four-time winner in the ALMS’ GT class
• On Sept. 14, 2011, Farnbacher established a new production-car lap record at the famous Nurburging Nordschleife by covering the 12.9-mile course in 7:12.13 seconds in a Dodge Viper ACR – shattering the previous lap record by more than two seconds

Ryan Hunter-Reay
• Born Dec. 17, 1980 in Dallas and resides in Fort Lauderdale, Florida
• Drives for Andretti Autosport in the IZOD IndyCar Series
• Has competed full-time in the IndyCar Series since 2008
• Most recent IndyCar Series victory came in 2011 at New Hampshire Motor Speedway
• Won IndyCar Rookie of the Year in 2007 (despite a limited schedule) and captured the same honor in the 2008 Indianapolis 500
• Secured first career victory at Surfers Paradise, Australia in 2003, becoming first American rookie in more than 20 years to win a Champ Car race
• Has four starts in ALMS, all in the 12 Hours of Sebring, with one win in 2011 in the LMP2 Class
• Has 16 previous starts in the Grand-Am Rolex Sports Car Series where he scored one win and three podium finishes. Victory came in 2007 at Miller Motorsports Park in Toole, Utah where he teamed with Jim Matthews and Marc Goossens to score the victory
• Has six starts in the Rolex 24 at Daytona, all coming in the last six consecutive races. His best finish came in 2010 when he placed third
• Competed in the Toyota Atlantic Series in 2002 where he won three races and led the series in laps led and poles
• Was the 1999 Skip Barber Formula Dodge National Champion