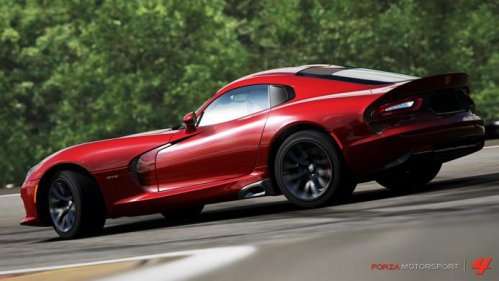 Today at the New York Auto Show debut of the 2013 SRT Viper, SRT brand CEO Ralph Gilles announced that the folks at Turn 10 Studios had indeed rendered the Viper images that hit the internet last night – as Xbox 360’s driving simulator Forza Motorsport 4 will soon be offering the 2013 Viper in both gameplay and Autovista modes via the upcoming Viper Pack.
Advertisement

Today’s introduction of the 2013 SRT Viper was one of the most anticipated vehicle debuts in American automotive history and when the new supercar was unveiled today – SRT CEO and President Ralph Gilles announced not one but three new Vipers. The 2013 Viper comes in the base form (named simply the SRT Viper), the SRT Viper GTS form with dual mode adaptive suspension and a slew of luxury additions and the new Viper GTS-R – a purpose built race car designed to help the Viper get back into the swing of the American LeMans Series. After talking about the upcoming Viper GTS-R race program, the new race-ready Viper roared onto the stage sporting race livery complete with Forza Motorsport 4 logos. Gilles went on to explain that at some point in the near future, Forza 4 gamers will be able to experience the 2013 Viper in the virtual world, referencing the video work done by Turn 10 Studios leading up to the debut. Click here for a complete look at the 2013 SRT Viper and the Viper GTS with high resolution pictures, video footage and full details on the new supercar.

A short time after the formal Big Apple introduction of the 2013 SRT Viper, the Forza Motorsport official website issued a statement that the new Viper would be coming to Forza 4 this summer as a part of the new Viper Pack Downloadable content (DLC). The 2013 SRT Viper will be available for use in the various gaming modes as well as in the Autovista mode, where gamers can check out the fine details of various cars included in the game with a voiceover by Top Gear’s Jeremy Clarkson.

The FM4 website didn’t go into any detail about the upcoming Viper Pack so we don’t know how much it will cost or what cars it will include – other than the 2013 Viper GTS shown in the video below. However, considering that the 2013 Viper will be offered in a base, GTS and GTS-R form, we would expect to see at least the second two of those included in the new Viper Pack. Seeing as how the GTS-R race Viper is sponsored by Forza Motorsport 4, it is a no brainer that we will get that car in the Viper Pack and with the deep metallic red Viper GTS shown in the video below, we can also expect to see that version of the redesigned supercar in the game. However, we will have to wait and see if the Viper Pack includes the base model 2013 Viper, or if they add any more Vipers from the legendary life of the original American supercar.

The Viper is already plentiful on Forza 4 but with so much enthusiasm for the model line, it certainly wouldn’t hurt any to offer some extra vehicles in the new Viper Pack. At the same time, as an avid Forza 4 gamer and a huge fan of the Viper; I can’t wait to get my hands on this new car on Forza (and in the real world). Hopefully the Viper Pack will include a new race or two…at least a monthly Rivals challenge when the new DLC pack debuts this summer.

There has been no official statement as to when the Viper Pack will bring the 2013 SRT Viper to Forza Motorsport 4 but when some official news surfaces – you can bet that TorqueNews will be among the first to report it. In the meantime, check out the video below of the 2013 Viper in action in the virtual world of Forza Motorsport 4.