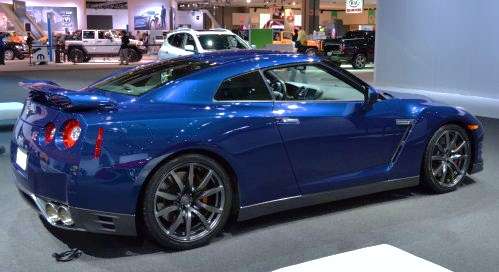 Among the highest performance vehicles to grace the floor of the 2011 LA Auto Show was the 2013 Nissan GT-R which, while looking like the 2012 models, gets a handful of revisions to keep it on a level playing field with some of the world’s most incredible supercars.
Advertisement

The key changes to the 2013 Nissan GT-R are under the skin of the sleek Japanese supercar, beginning under the hood. The twin turbocharged 3.8L V6 of the 2013 GT-R has been fitted with a new, more efficient air intake system including an enlarged intake duct for the intercooler. In addition to reducing engine emissions, the changes made to the 2013 GT-R’s V6 engine increased the output from 530 horsepower and 448lb-ft of torque to 545 horsepower and 463lb-ft of torque.

"The 2013 Nissan GT-R once again sends a bold statement that it remains on the leading edge of international sports car design, technology and performance," said Brian Carolin, senior vice president, Sales and Marketing, Nissan North America, Inc. "It's our desire to keep pushing the envelope, to never settle for second best or second place – a philosophy that makes Nissan GT-R one of the most coveted and affordable supercars in the world today."

Once the Nissan engineers had packed more power into the 2013 GT-R supercar they turned their attention to the handling properties in an effort to improve one of the world’s best-handling cars. The adjustable Bilstein DampTronic system has been retuned in the new GT-R while the high end Brembo braking system includes six piston front calipers, four piston rear calipers, low steel high friction brake pads and full-floating drilled rotors - allowing the Nissan supercar to come to a full stop from 60 miles per hour in just 2.7 seconds. Again, that’s 60-0 in 2.7 seconds.

On the outside, the 2013 Nissan GT-R is nearly identical to the 2012 model but for 2013, there is a new dry carbon fiber rear spoiler and six exterior color options: Deep Blue Pearl, Jet Black, Solid Red, Gun Metallic, Pearl White and a 4-stage metallic Super Silver.

The 2013 Nissan GT-R is available in two trimlines; the GT-R Premium and the GT-R Black Edition. The GT-R Premium comes with 10-spoke, 20” aluminum RAYS wheels with a premium dark finish wrapped in Dunlop Sports Max GT 600 DSST CTT tires measuring P255/40ZRF20 up front and P285/35ZRF20 out back. The 2013 GT-R Black Edition features a special metallic black 20” RAYS wheel design wrapped in the same Dunlop high performance tires along with a unique red and black interior with Recaro leather race seats and the aforementioned dry carbon spoiler.

The 2013 Nissan GT-R is set to begin reaching select dealerships (there are roughly 700 of these dealerships) around the world in January of 2012. It will certainly be interesting to see if the changes made to the 2013 GT-R will be enough for the Japanese supercar to knock out the Chevrolet Corvette ZR1 and the Dodge Viper SRT10 ACR on the famed Nürburgring after the 2012 model fell about two seconds short of the Vette and almost nine seconds shy of the 2010 Dodge Viper.

Check out the gallery on the right by clicking any of the thumbnails for a closer look at the 2013 Nissan GT-R at the 2011 LA Auto Show and stay tuned to TorqueNews.com for continuing coverage from the City of Angels!

Other 2011 LA Auto Show News:
The BMW i3 introduces sensibility to the i-series lineup in LA
The BMW i8 introduces LA to the electric hybrid supercar
The 2013 Ford Mustang Boss 302 to debut at the 2011 LA Auto Show
The 2013 Ford Mustang gets a new look, the 2013 Mustang GT gets more power
Details of 2013 Ford Shelby GT500 - World's Most Powerful Production V8
Chevy Reveals Full Details on Camaro ZL1 Including Price