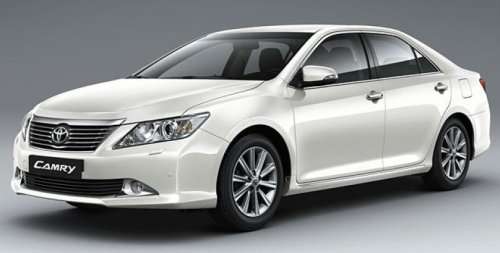 Last week, Toyota USA unveiled the 2012 Toyota Camry with a redesigned look inside and out and now we have a look at the version of the 2012 Camry destined for the Russian market – with a look quite different from what American buyers will be getting later this year.
Advertisement

The 2012 Toyota Camry sold in the Ukraine is essentially identical to the one that will be sold in the US when it comes to the chassis, suspension and drivetrain as well as the greenhouse (roofline) and along the sides but in the front and rear, the Camry headed to the former Soviet Union bears a strikingly distinct look compared to the American models. The headlights of the Ukrainian Camry are larger and rectangular, with a gap where the fascia separates them and the grille where the American headlights taper towards the inside with a sharp point along the bottom – butting up to the grille. Next, the grille differs in that the Ukrainian model has a chrome six-bar grille with a thick chrome strip along the top, with a centered Toyota logo. On the other hand, the American 2012 Camry will come with a variety of grille treatments depending on the trimline, stemming from the egg crate look of the Camry SE to the dual chrome bar layout of the high end Camry XLE. Finally, along the bottom of the Ukrainian 2012 Camry, they receive a thinner grille opening with the fog lights mounted in the outer ends where the American Camry has separate fog light housings towards the edges of the front fascia and a larger lower grille opening.

Along the back end, the Ukrainian 2012 Toyota Camry wears a boxier shape, with taillights that run fill in more of the rear face of the sedan compared to the sharp, angular taillights of the 2012 Camry sold in the US. The lower portion of the rear fascia holds a set of red reflectors not required in the US, and where the back of the car wraps forward to meet the sides, there is a harder body line running top to bottom than what is seen on American models.

It is unclear what other non-US markets will get their hands on the 2012 Toyota Camry headed to the Ukraine but as the new Camry heads to more and more world markets, it will be interesting to see just how many different variants of Toyota’s bestselling model are offered around the globe. Overall, the Camry headed to Russia looks to have more of a luxury look than the sporty styling offered in the US – a move which could help them interest buyers who want something higher end when buying their new “business sedan”. Check out the gallery below for a closer look at the Ukrainian 2012 Camry and click here for a look at the 2012 Toyota Camry that will serve as the Daytona 500 Pace Car in 2012.

Toyota Cardiff wrote on September 2, 2011 - 3:07pm Permalink
Very interesting how brands modify their models based on the country they are importing it too. I like the Ukrainian Camry, more upscale and less of a family sedan.