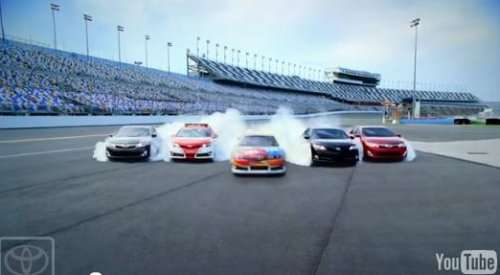 The 2012 Toyota Camry and Camry Hybrid were unveiled just over 24 hours ago and we already have our first taste of advertising for the redesigned sedan as Toyota USA has offered up a handful of commercials on their official YouTube channel – all of which show the performance capabilities of the Camry with the help of NASCAR/Toyota Camry driver Kyle Busch.
Advertisement

The Toyota USA YouTube channel is chock full of videos of the 2012 Toyota Camry, including the unveiling video from yesterday afternoon and a variety of 15 second clips showing the new Camry doing fun stuff like big, smokey burnouts. In addition to those short clips, Toyota has also offered four television-length videos showing similar high performance acts like burnouts and racing around NASCAR race tracks that range in length from 44 to 52 seconds. All of these videos call upon Toyota’s success in the NASCAR ranks, including regular appearances from the #18 Toyota Camry stock and driver/Sprint Cup Series leader Kyle Busch tearing it up with – and in – the 2012 Camry and Camry Hybrid. These first commercials leave no question as to how Toyota hopes to market the Camry to younger buyers, focusing more on the available performance than the key features that the average 60 year old Camry buyer worries about.

The first video is named Dominating Daytona and it starts off with 3 new production versions of the 2012 Toyota Camry along with the Daytona 500 Pace Car Camry and the #18 Camry race car driven by Kyle Busch all doing a big smokey burnout before taking to the highbanks of the legendary Daytona International Speedway. The cars tear around the track in a variety of formations before the voiceover guy begins running through a list of credentials for the new Camry including the hybrid technology, the stock car’s abilities and the 268hp offered by the 3.5L V6 engine option.

The next commercial spot featuring the 2012 Toyota Camry is titled Electrified and it begins with NASCAR driver Kyle Busch tearing up a set of tires in his #18 M&Ms Toyota Camry race car. As he continues to smoke the tires, the voiceover guy talks about the items needed to go from the high performance race car shown and the 2012 Camry Hybrid. Sure, it is a little far-fetched but who doesn’t love a good burnout video that is actually an advertisement for a 43mpg hybrid Toyota?

Next up is the 2012 Toyota Camry commercial titled TGIF although at no point does Toyota make the connection between the Camry and “thank goodness its Friday”. Like many of the other 2012 Camry videos, this one shows Kyle Busch roasting the tires on his Camry stock car before sliding up next to a production Camry. Busch climbs from his race car and walks over to the production Camry – entering by climbing through the driver’s side window (of course). At the end, Mr. Busch goes so far as to roast the tires in the 2012 Camry XLE (presumably with the 268hp V6) before leaving the camera’s view…and I have to say that it is one amazing burnout for the 2012 Camry.

Finally, we come to the 2012 Toyota Camry commercial titled Kyle Busch Goes Hybrid. This video includes Kyle tearing around Daytona International Speedway in the 2012 Toyota Camry Hybrid at speeds around 100 miles per hour while Busch talks up the Camry Hybrid – going so far as to proclaim that the Toyota uses what they learn on the track to improve their production cars. Ive been in a NASCAR race car and I’ve driven the 2012 Camry and while I fail to see the similarities between the two, it still makes for a pretty good commercial.

Image above captured from the Toyota video Dominating Daytona.