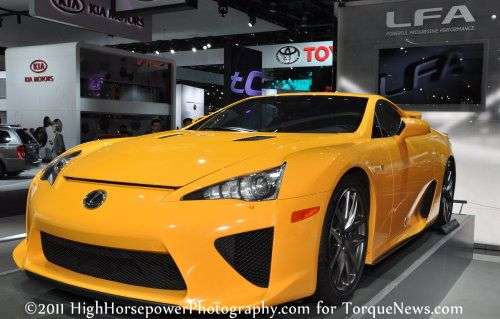 After getting busted doing 128 in a 45mph zone in May of this year, Toyota Camry driver Kyle Busch got his day in court with the verdict being a loss of his driver’s license for 45 days along with community service and a hefty fine (for the average person).
Advertisement

Kyle Busch, who drives the #18 Toyota Camry stock car in the NASCAR Sprint Cup Series (and currently leads in the championship point standings), was caught going 128 miles per hour in a bright yellow 2012 Lexus LFA supercar lent to him by Toyota Motor Co near his home in North Carolina. The posted speed limit is 45 miles per hour in that area so although the officers let him drive away that day, he appeared in court earlier this week to face charges of careless driving and reckless driving.

Busch plead guilty to the speeding charge and offered a plea of no contest on the charges of careless driving and reckless driving for his 128mph hi jinks in the 2012 LFA that was out on a 24 hour test drive. Although Busch’s attorney pushed for some “good ol’ boy” judicial decisions citing that Busch driving the LFA at those speeds is similar to a scalpel in the hands of a surgeon – not a knife in the hands of a 5 year old. Luckily for the driving public, the judge hammered Busch pretty hard giving him a 45 days suspension of the state driver’s license, a $1,000 fine and 30 days of community service.

Even though Kyle Busch’s lawyer argued that his client should receive a lighter sentence, Busch’s extreme speeds may have been found more inexcusable by the judge considering that within a close proximity of his high-speed romp was a church, a pre-school and a group of homes. Ultimately, Kyle Busch is pig rich by the standards of the average fan so $1,000 is nothing and while he doesn’t have his license – he has a whole team of crewmembers who will likely be at his beckoned call for the next month and a half whenever he needs a lift.

This was not Busch’s first run-in with the law over driving offenses as he previously was nailed for 55 in a 35 along with doing a burnout on a public street. In the long run, while the judge may have made an example of Busch according to the defense lawyer, the punishment will have no real impact on the celebrity driver’s life. After the announcement of his punishment, Busch offered the following comment:
"I'm certainly sorry that it happened. It wasn't a toy, it's a high-performance vehicle. It should be driven with caution. Obviously, I didn't have caution and I had a lack of judgment. There's probably reason why on the TV commercials that they always show at the bottom, 'Professional driver, closed course.' Mine was not that. Again, I apologize sincerely. All I can do is make sure it doesn't happen again."

Kyle B. wrote on August 24, 2011 - 3:51pm Permalink
In my defense, I was driving 103 and I saw the cop and slowed down but then decided since he couldnt catch me id speed up. He saw me later at a gas station picking up some girls and some condoms. I should have skipped the condoms and would have gotten away with it.
James wrote on August 24, 2011 - 11:02pm Permalink
hahahahaha nice one
Amie King wrote on August 24, 2011 - 4:00pm Permalink
Kyle thinks he has more power then the Divine power. He should have gotten a more severe punishment then this. Just goes to show how truly messed up the legal system is.
ISHO U wrote on January 25, 2012 - 5:20am Permalink
This is yet another in a long line of sad stories of Toyota promoting defective behavior -- from malicious jackass stunts like "grassing" a lawn to showing reckless disregard for human life (crashing through a house), to supporting drivers who haven't any more regard for the laws of the communities in which they operate their lethal machines to drive 128 in a 45 zone. Properly-licensed CMV operators know that being a professional driver raises the standard both for scrutiny and for compliance; not only is Kyle Busch a professional driver, he's also a spokesperson for the parent automaker in whose vehicle he committed this outrageous offense. It's one thing if a "booger-eating moron" flouts the law; it's something else if an ordinary professional driver flouts the law, but in the case of a NASCAR driver, such wanton behavior is inexcusable: if not the court (by way of exercising its equitable powers), then NASCAR should revoke his competition license for a period of not less than 10 years. If Toyota was run by people who care at all about other human beings, the environment, etc. -- as much of their Prius and related advertising suggests -- then should drop Kyle Busch from their stable of drivers for a period of not less than 10 years. Instead, they'll probably just ask whether he enjoyed the cruise in their $480,000 car (after fees & taxes, of course) that looks an awful lot like a 1994 Toyota (Mark IV) Supra with an aftermarket body kit. Of course, the Supra used a 3-liter L6 mill developing 315 lbs-ft of torque; for $10,000 per liter (or $48,000 per cylinder, if you prefer), the LFA's engine provides 354 lbs-ft of torque. There are obvious other differences: the Supra used a 100.4-inch wheelbase (the LFA's wheelbase is 2.2 inches longer) and the Supra was 1.8 inches taller than the LFA's 48-inches. For top-speed freaks, the Supra was factory-limited to 177 mph in the USA, but the LFA can reach 202 mph in certain school zones when driven by a lunatic. Really: half a mil, for a 2-seat car that goes maybe 202? How small must one's wanker be before that starts sounding like a good idea? Well, if it's any consolation, Bush, yours is probably bigger than the nutball who bought a Veyron. OOPS!