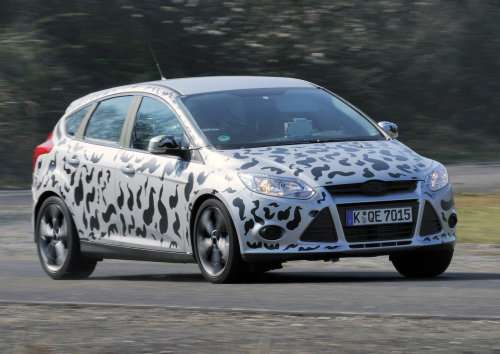 The 2012 Ford Focus ST hits roads around the world

The new high performance 2012 Ford Focus ST will be the first global performance application of Ford’s new EcoBoost technology and as a sign that the full launch of this new hot hatch is just around the corner; Ford has deployed a fleet of 60 “test mules” to major markets around the world for the final phase of pre-release testing.
Advertisement

On-road testing is generally one of the final testing phases prior to a new vehicle hitting the showroom and Ford’s performance engineering teams around the world have been issued pre-production versions of the 2012 Focus ST – packing a 246hp 4-cylinder EcoBoost and a slew of other modifications to help this hot hatch deserve that title. Items like large, ST-specific wheels, a suspension setup that snugs the car to the ground and a throaty center-exit dual exhaust setup help the Focus ST to stand apart from the non-performance minded Foci but to really set them off, Ford has wrapped these 60 Focus ST test cars in a unique black and white camo (shown on the right).

While high performance is the key concern of the 2012 Ford Focus ST, the Motor Company has put tremendous effort into the vehicle to ensure that it can also serve as a comfortable daily driver and that includes offering shockingly high fuel mileage for a sport model – thanks to the EcoBoost technology. To make sure that the new Focus ST is “ready” for the consumer market, Ford’s engineers will push the car to the limits both on well-known raceways like the famed Nürburgring along with putting the hot hatch through the rigors of LA traffic.

Ford hasn’t provided a number as to how many 2012 Ford Focus ST hatchbacks have been sent to the major markets but the odds are good that most of your major cities around the globe could be paid a visit by this new high performance, high efficiency sports car over the next few months. Jost Capito, Ford’s director of Global Performance Vehicles, offered the following comments with the news of the “disguised” Focus ST mules being tested around the world:
“The new Focus ST is eagerly awaited around the world, which is appropriate as this is our first global performance model. It must live up to Ford’s reputation for producing affordable yet exciting and sporty versions of its smaller cars that reward and delight enthusiast drivers, but can also be used every day. We’ve done all the engineering groundwork, and now we’re using some of the most demanding roads we can find in Europe and North America to validate and fine tune the performance and driving dynamics.

For enthusiasts in North America and Asia who have asked why our compact performance models were not available to them, well, the wait is almost over. The new Focus ST will offer exactly the same exciting driving experience wherever it’s on sale.

Like the Focus ST and RS models before it, the new Focus ST’s final set-up will be achieved after painstaking tuning on some of the most demanding roads we can find from California to the Nürburgring, and from high-speed German autobahns to classic British B-roads. Keep your eyes open for our prototypes as we work on delivering a Focus ST driving experience that will delight performance car fans around the world.”

The short story here is that after years of waiting, Ford fans who have been demanding a similar high performance version in the US to what the folks in Europe have been getting will soon have their chance to buy the new Ford Focus ST. There is also the hope that, if the Focus ST sells well enough, US buyers could also get their chance at the even high performance Focus RS…but that is merely a rumor based on the hopes and dreams of domestic hot hatch lovers around the US.

Tesla Giga Berlin's New Hurdle: It's Not Only the Gov't, but Now Tesla Itself
Teslas Are Sold Out Until 2023, But The Timing May Reverse
END_OF_DOCUMENT_TOKEN_TO_BE_REPLACED