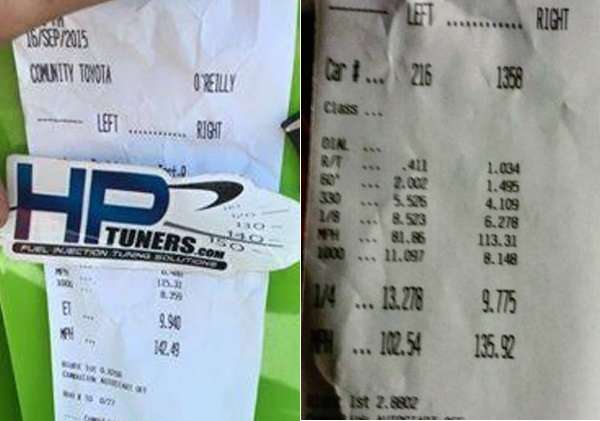 2 Hellcat Challengers Break into the 9s

We have featured a handful of Dodge Challenger SRT Hellcat quarter mile runs over the past year, but yesterday, the first two modern Mopar muscle cars broke into the 9 second range, with one cracking into the high 9s while the second got way into the 9s.
Advertisement

The Dodge Challenger SRT Hellcat is the most powerful muscle car of all time with a supercharged Hemi provided over 707 horsepower in factory form, also making the Hellcat Challenger the quickest muscle car of all time. When the beast was first introduced, Dodge announced NHRA certified quarter mile times of 11.2 with stock tires and 10.8 with drag radials, but over the past year, we have seen a few stockish Hellcat Challengers eclipse that 10.8 number while those with some modifications have gotten lower into the 10 second range.

Unfortunately, while several Hellcat Challenger owners around the country had gotten into the low 10s – with one running a 10.000 – none of them had broken into the 9 second range. That all changed yesterday, as a Challenger in Texas was the first to get into the 9s, followed by another Mopar muscle car in Maryland that ran in the 9s twice, including one run much deeper into the 9s.

Before I get into the details of these runs, a few bits of housekeeping on the 2 9-second Dodge Challenger SRT Hellcats. These runs were both made yesterday (9/16/15) and one was run late last night, so details are still trickling out. Fortunately, we have a mod list from both cars and videos of both record runs!

Now, on with the good stuff.

First Hellcats in the 9s
The first news of a Dodge Challenger SRT Hellcat hit the net late yesterday afternoon, when a Sublime green machine in Texas rocketed down the quarter mile in 9.94 seconds with a trap speed of 142.49 miles per hour. This is, as far as anyone in the Hellcat community knows, the first time that a Hellcat Challenger ran a 9-second quarter mile time.

This Hellcat Challenger was built by Fastlane in Houston, Texas, and the record setting run was made at Royal Purple Raceway. The modification list includes aftermarket upper and lower pulleys (thus more boost), headers, a 150hp nitrous oxide setup, an E85 conversion, a tune to bring together all of the power adders, an aluminum driveshaft, new rear control arms and a set of Mickey Thompson drag radial tires on lightweight wheels. Basically tires, nitrous, pulleys/more boost and a tune put the most powerful muscle car ever into the 9 second range.

Here is the video for the 9.94 run. I will warn you that the language after the run isn’t safe for work and the video quality goes downhill after the run, but this is – I believe – video of the first 9-second Dodge Challenger Hellcat quarter mile.

The Record Falls Quickly
While the folks from Fastlane will forever have the first Hellcat Challenger to run in the 9s, their record as the world’s quickest Hellcat didn’t last very long. Late last night, a Hellcat Challenger that has long been tickling the 9 second range finally broke in – and it did so in a big way.

As you can see from the timeslip, this Hellcat Challenger ran an incredible 9.775 quarter mile at 135.92 miles per hour. He did so while pulling an equally incredible 1.495 60 foot time while getting to the 8th mile in just 6.2 seconds. This run was made at Cecil County Dragway in Maryland and the mod list for this beast included an aftermarket lower pulley (thus more boost, but less than the other car with both pulleys), headers, full exhaust, a 150hp nitrous oxide dry kit, a 180 degree thermostat, a good engine tune, sticky tires and lightweight wheels.

After that 9.77 run, this Hellcat made another 9-second run later in the evening, so while this white Challenger in Maryland wasn’t the first in the 9s – it is the quickest Dodge Challenger SRT Hellcat in the world.

Crank up your speakers and enjoy, and stay tuned for more Hellcat record times as the temperatures continue to fall!