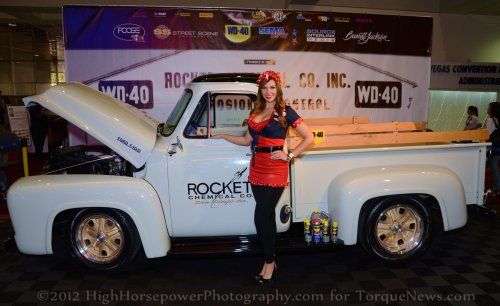 This weekend, the 1953 Ford F100 pickup designed by Chip Foose for the people at WD40 and the SEMA Cares charities rolled onto the auction block of the Barrett Jackson Auto Auction and when the final gavel came down – this gorgeous restomod pickup raised $170,000 for children’s charities.
Advertisement

The 1953 Ford F100 shown in the image on the right was actually one of two Ford pickups designed by Chip Foose with the help of the companies involved in the SEMA Cares Charity group with the other being a 2012 F350 Super Duty but this old school pickup is the first of the two to hit the auction block of Barrett Jackson.

The 1953 Ford F100 designed by Chip Foose is not as radically designed as the American muscle cars designed by Foose for WD40 and SEMA Cares over the past three years but that doesn’t make this vintage pickup and less cool. Under the hood is a 239 cubic inch flathead V8 fitted with Edelbrock cylinder heads that vent through the MagnaFlow exhaust system but for the most part, the drivetrain of this sweet truck has been restored more or less to original with the help of K&N, American Autowire, Painless Performance, Egge and L&R Engine.

On the outside, this slick ’53 Ford F100 wears the Rocket Chemical Company logo – the name of the company at the time that they invented WD40. Unlike the Mustang, Camaro, Challenger and F350 Super Duty that wear wild paint schemes that are obviously designed in the mind of Chip Foose, the 1953 F100 wears just a few logos, a crème white paint scheme, a set of unique MHT/Foose wheels wrapped in Pirelli tires and beautiful stained wood on the bedsides and on the bed floor. Along with those companies who helped get this numbers matching 1953 F100 up and running, BASF provided the paint while LMC Truck, Street Scene Equipment, Quiet Ride Solutions and McGard pitched in to finish this cool old school truck.

As a special surprise, accompanying the 1953 Ford F100 from WD40 and SEMA Cares was a new guitar signed by country music superstar Toby Keith on the front while the back side of the body wears a sketch of the F100 penned by Chip Foose and autographed by the well known automotive artist. The winner of the auction for the ’53 Ford truck would also win this collectable guitar and after a variety people included in the build of the truck spoke – including Chip Foose himself – the auction got underway. The auction started at just $10,000 but it quickly skyrocketed into the six figure range and when the final gavel sounded – the winner paid a whopping $170,000 for the unique truck and the double autographed guitar.

The proceeds of this auction go to two children’s charities – Childhelp and the Victory Junction Camp. Childhelp is a group who provides treatment for children and families who have dealt with child abuse along with offering programs to prevent child abuse. Victory Junction is a camping facility that provides positive experiences for the families of kids with chronic medical conditions and serious illnesses. The Mustang, Camaro and Challenger auctioned off over the past three years have raised over $400,000 and when you add in the $170,000 raised by the 1953 F100 – WD40 and SEMA Cares have donated well over a half million dollars to these two great causes. The 2012 Ford F350 Super Duty that debuted with this 1953 F100 will be shown around the country over the course of the year before landing on an auction block that has not yet been determined but when it does, we can expect to see another nice chunk of change to Childhelp and Victory Junction.

We have a gallery of both of the WD40/SEMA Cares charity trucks that debuted at the 2012 SEMA Show and you can check out those trucks by clicking any of the thumbnails above on the right. The video below shows the auction for this truck along with the preview piece with Chip Foose and others from the build team courtesy of Speed.