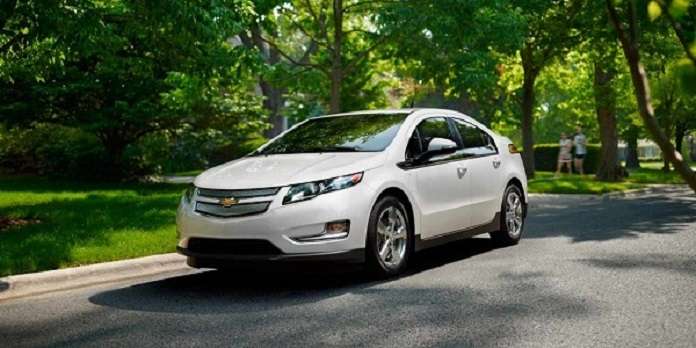 Why can't GM take the Chevrolet Volt and make it a great EV? It looks more beautiful than Tesla Model 3 and Nissan Leaf.
Advertisement

These days when Tesla Model 3 and Nissan Leaf top the top news headlines in the media and even Toyota came up with a big news about its electric batteries one wonders about General Motors. Why there isn't a big news from GM taking some lead in the electric car news? Yes, GM has the Chevy Bolt, which is a nice looking car with some amazing specs and features. But what happened to Chevy Volt? In my option Volt looks much better than the Bolt. Owners of Volt are have been very happy with their car and it looks like a nice luxurious vehicle with a stunning design.

Why not take Chevy Volt's design with some of its amazing characteristics and make it a great electric car that can easily compete with Tesla Model 3 and Nissan Leaf?

I asked few EV owners about this and most of them are either a Volt or Bolt owners and here is what some of them said.

One person, named Matthew, agreed with me, but he said he thinks Tesla Model 3 looks better. "It's definitely better looking than the Bolt," Matthew wrote referring to the Chevy Volt. "A different battery structure would fit perfectly into the Volt," he said.

"The new Chevy Volt is actually pretty blah in my opinion," writes Sean. "The back looks alright I suppose, but the front looks like a 7 year old Honda Civic. I much prefer the styling of the gen 1 and especially the ELR, but the power train and features of the Gen 2," he added.

Ivan Jue, who has contributed several EV articles to TorqueNews said this. "I love our 2016 Volt, and it works well for us. We already have 36k miles on it. But Bolt makes more sense currently as a mass market EV. Sedan sales overall are in decline, while the small and medium crossover segment keeps growing. The Volt has the utility of a hatch, and looks great, but with a sloping roof-line, this limits utility a bit. And the interior space is fairly small.

"The Bolt (even though it has no AWD) is a crossover design. It has significant legroom and headroom. Once you get in and drive it, it's very apparent. You step "in" to a Volt, but you step "up" into a Bolt. HRV/CRV, RAV4, and Trax don't look "pretty" either, but they are selling extremely well. Practicality and utility matter more over exterior looks," said Jue.

I would love it if GM did it: I mean if GM improved the Volt and came up with a decent EV. "A performance SS Volt would be awesome," wrote user named Shad. "I actually really like the functionality of having a backup generator. Maybe they could make one like the BMW i3 where the engine is smaller and more of a parachute."

He also added that there is a rumor, according to which GM will move the Chevrolet Volt's powertrain to a crossover. We just have to wait and see. Overall, I don't think GM is sitting with its hands crossed when the world is moving toward more steady EV adoption and countries like France, India and UK announce a ban of ICE cars in the next few decades.
.