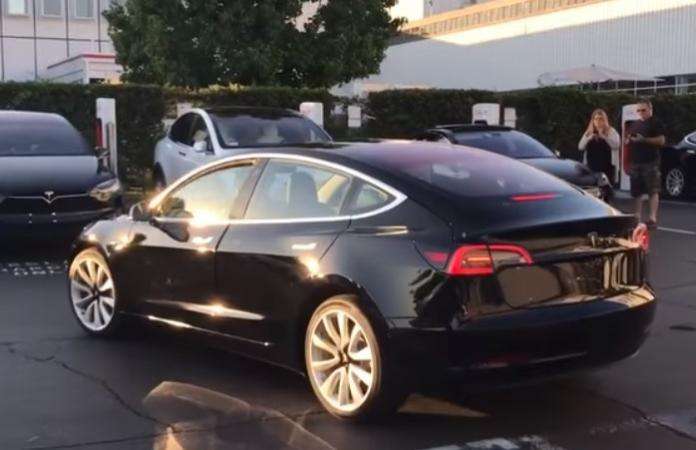 As the interest in Tesla Model 3 grows to sky high there is a discussion on Tesla Forum where members and enthusiasts talk about what it would take to sell your Tesla Model 3 and for how much. Some of them refer to the reservations while others talk about the real car which has already rolled off the assembly line this month.
Advertisement

The person who started the discussion writes that there are many rich people in this world who don't have Tesla Model 3 reservations and they are either looking for a reservation for sale or would pay premium price to buy a Model 3. Let's say you got yours in August or September, you drove some and would like to sell it. How much extra would you ask for your Tesla Model 3.

"The reason I'm bringing this up is a co-worker sort of jokingly asked if I would sell my Model 3. If he paid me $10k over what I paid for it. I thought about it for a second and said no way," writes a user named Noleaf on Tesla's Forum page. While this is a single case, it brings up an interesting question. Soon we will see Tesla Model 3 vehicles appearing in the market. How much do you think their prices will be?

How much would it take for you to sell off the Model 3 you have been waiting patiently.

One forum member wrote that he would probably be seriously considering to sell his Model 3 for 20,000 dollars over whatever he pay. That means if he payed for his Model 3 $35K, he would sell if for 55,000 dollars. He also writes that he doesn't intend to "actively offer it for sale," but another question comes up. If someone has 55,000 dollars to spend, wouldn't he or she spend a little more and buy a Model S? I personally find the 2018 Nissan Leaf equally interesting. It will be widely available as of this September. In fact, here is a little story comparing the concept of the 2018 Nissan Leaf with Tesla Model 3.

Some other forum members say they would you have to factor in the tax credits and how much you would be giving up. Speaking of of tax credits consider the following.

Some people say that if you are getting a tax credit for your Model 3 there are some rules that come with it. Apparently you can't keep the tax credit if you sell your car before certain period of time. Apparently there is a fine print. "The federal tax credit isn't applicable to an electric vehicle being purchased for the purpose of reselling it, reads this Edmunds article. In other words, you may have to wait at least six months to one year before selling your EV if you want to benefit from the federal tax credit.

Sell To Finance a New Model 3

There is another opinion. One person says he would sell his Tesla Model 3 with exactly the same price and use the money to buy another Model 3 and finance it. I think this is a more balanced option that breathes no greed. I like it.

In conclusion, by reading the discussion thread, it seems that most people in the discussion would agree to get extra $10-20K for their Model 3 if there were offers. Few others say it would be tough for them to part with the car for which they have been waiting for a long time.

How long do you hope to drive your Tesla Model 3? In the meantime, let's wait and see if any of these things will happen on July 28 when Tesla starts delivering the first Model 3s to its cusotmers.