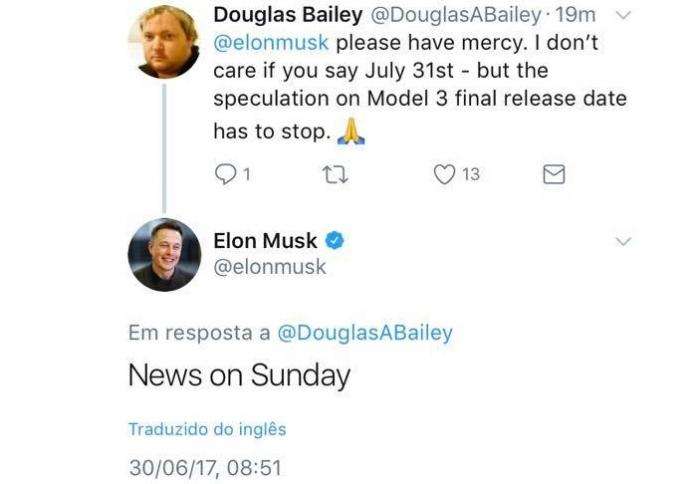 Tesla CEO Elon Musk made a Twitter announcement that there will be a much weighted Tesla Model 3 news this Sunday. Will that news come as a tweet or an official announcement we don't know, but Tesla Model 3 reservation holders are actively discussing the possible content of Musk's announcement, which they hope will cover production, delivery and schedule. Here is what they say.
Advertisement

But first, the tweet. Here is the famous, short and three-word tweet about Tesla Model 3 news by Tesla CEO Elon Musk that has made huge news in the EV world making everyone to talk about it.

Generally the chatter in the Tesla and EV forums is that Model 3s will start to stream out of the production line to reservation holders' hometowns in mid-July. That is their favorite part of the expected Model 3 announcement this Sunday.

"That was my first fantasy too - announcing that they have already or will be able to produce Model 3 in July - produce enough for all employees to get theirs in July/August, then all current owners in Aug/September... so that October 1-December 31 is all of the remaining 115,000 pre-reveal reservations," comments a a Model 3 reservation holder named Phillip in Tesla Model 3 forum on Tesla's discussion page.

Some others want to know about Tesla's suppliers regarding the Model 3. "I want to know if all the suppliers met the "impossible" deadline of July 1st because as we all know, you can't even sell one car if one supplier of one part does not deliver," writes one person in the forum.

"Elon is a quick learner. I believe the Model 3 roll out will be a grand slam for Tesla and a chance to show the world that Tesla is in the driver's seat now while everybody else is in the rear view mirror."

"I honestly hope this means that things are at least a little ahead of schedule from what we thought? Granted anything before December 31st is still technically ahead of schedule, so maybe I just need to work on my patience."

But not everyone is enthusiastic. Some others see the glass half-empty. "Here comes the glass half empty guy again. Elon Musk on Sunday: 'Model3 release is postponed until further notice," writes another forum member. I mean this can be news too, but at least it can bring some clarity for those who anxiously wait for their Model 3 to arrive.

What are your expectations from Musk's announcement?