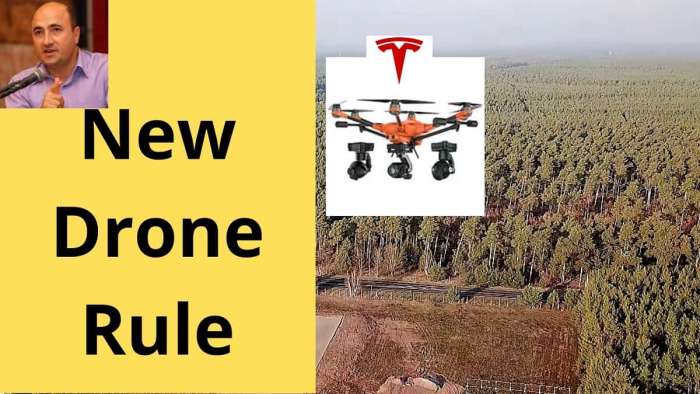 There Is an Addition to Drone Rule at Tesla Giga Berlin

Tesla Giga Berlin construction site has a new drone flight regulation. A few days ago I reported that the drone flight ban was lifted at the construction site of the Tesla Giga Berlin factory. The police had told my local friend Jurgen that the drone ban was due to a special police operation at the Giga Berlin site. However, today there is a new drone update and change of regulation and I am going to tell you about that.
Advertisement

Yesterday, my friend Jurgen, who tweets at @GF4Tesla handle went to the Tesla Giga Berlin construction site to make a new drone video update and compare it with his December 2019 drone video. He wanted to show how much has changed at the Tesla’s Berlin factory site since the December of 2019.

However, he was stopped by the police and was forbidden to make a drone video. The police told him that the local mayor has issued a drone ban for the entire site. Jurgen was not aware of this.

Then my other friend, who tweets at the handle @Gigafactory-4 commented and told us that he talked to the regulatory office in Grunheide. For those of you who are new here, Grunheide is the local municipality, which has the jurisdiction over Tesla’s Giga Berlin construction site. In other words, the Tesla factory in Berlin is in Grunheide.

Talked to the regulatory office #Grünheide. The only added rule is that we should keep a distance of 100m to the #gf4 site. All the other rules (don't fly over the area, keep 100m distance to highway, don't fly higher than 50m etc.) continue to exists.

So, the regulatory office in Grunheide told him that there is a new added rule to drone flights over the Gia Berlin construction site. The only added rule is that drone operators should keep a distance of 100 meters to the Gigafactory 4 site. All other existing rules site continue to exist. The other existing rules are the following. 1st. Don’t fly over the Gigafactory area. 2nd. Keep 100 meter distance to the highway. 3rd. Don’t fly higher than 50 meters. There are probably some more rules, but these are the main ones.

The conclusion is this. Drones cannot fly closer than 100 meters to the Tesla Giga Berlin. If there are future drone news updates, they will be from a 100 meter distance and no higher than 50 meters. But then, a twitter user Matthias Hacke, shared a link and writes that “According to German drone regulations you are allowed to fly 100 metes high.” I don’t know, if the Grunheide regulators have the 50 meter rule only specifically for the Giga Berlin.

Then, our friends were looking to build a map with a radius of 100 m from the Gigafacotry 4. Tobias Lindh quickly created one using the Google Maps which I am about to show you here. So, take a look at this map and also I will add one of Jurgen’s latest drone flights, which he sent last Friday. 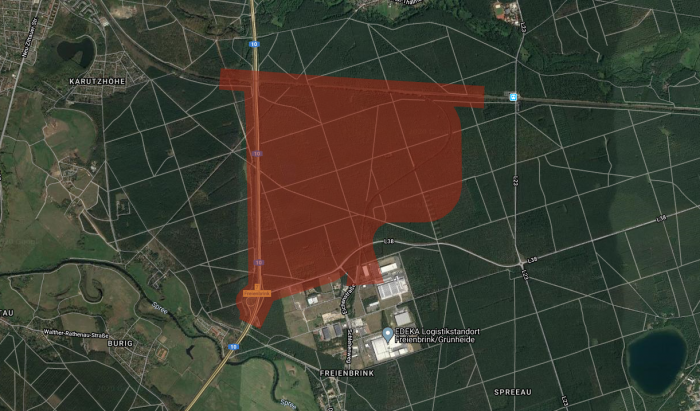 Thanks for reading and see you in my next story.