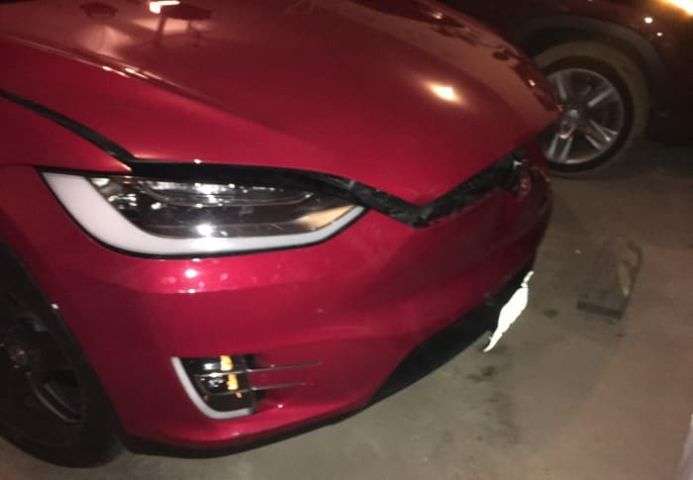 Durability of this Tesla Model X was tested when the owner hit a deer on the road. The damage to the car doesn't seem to be very bad.
Advertisement

Today in Tesla Reddit one Model X owner shared his EV's picture hit by a deer. Picture was shared via Imgur and we decided to share it with our readers as well.

"I hit a deer at 6am yesterday morning as it jumped out in front of me. My Tesla took a very decent hit to the front, but the deer, unfortunately, didn't make it. I now get to go through the repair process, and finding out how long Tesla's delay on new parts is," writes Ann whose car you see in the image.

Depending on the speed the driver was going the damage isn't bad. I hope the deer is alive too. I have seen and heard of vehicles either totaled or extremely damaged after deer impacts. Deer impacts can be life threatening too.

This is now going to cost few bucks and the discussion members asked Ann to update them about the repair costs. Everyone there wants to know how much it will cost to repair a Model X like this.

She then updated the conversation after speaking with Tesla.

Generally people complain of slow repairs. "My Model S has been in the shop for two weeks already for a similar level of damage, and they are estimating another two weeks for back-ordered parts. Apparently the bodywork is relatively easy, but there are dozens of sensors and single-use brackets and connectors that have to be replaced, and then they have to send it back to Tesla to recalibrate everything," writes a group member named Codebender.

Another person, who had a similar experience gives an advice saying this will take longer than they state. "In terms of the logistics of the repair, most places don't have the experience and frankly, replacement parts from Tesla can take a while. They may also have to re-order a part - really try to see if you can have the shop order parts and then give the car in to get worked on. Presuming it's in driving condition, and it looks so. Seriously, I wish I had done this as the first 40 days, it was just sitting there waiting for parts - the second time I hit a deer, I had them assess it, order parts, then I came in for the work. Got my car back in 10days," Kellie writes.

Has your car ever had a deer impact? Please share your experiences in the comments section below and let's discuss how much it cost you to repair and how long.