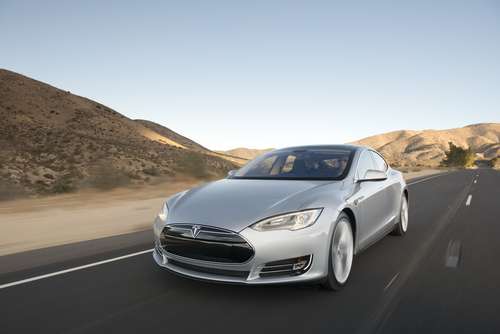 What is the advantage of getting all wheel drive Tesla Model S vs rear wheel? This question is asked a lot by Tesla owners or potential buyers. This question is especially valid when you drive very little in snow, say in Southern parts of the United States or hot climate areas. Here is what Tesla owners say about the advantages and disadvantages of all wheel vs rear wheel drive.
Advertisement

"All wheel is definitely worth the money," writes Apoorv in Tesla Model S Owners Club on Facebook. "I have had both, and when I had the rear wheel, it used to skid so much during snow. That 1% can become the write-off in an accident," he continues referring if you drive only 1 percent of your driving in the snow.

Some people say the Model S D slips a lot less in the rain too. The trade off between the all-wheel-drive and rear-wheel drive is the lower range and more tire wear. There is no good way to drive with much power unless you have an AWD Tesla. Indeed, the all-wheel-drive not only is good for the handling of the Tesla Model S, but also helps in slippery roads during rain, let's say if you live in Florida.

Don't Miss: Tesla Model S gets AWD for “insane” speed and a range boost – and autopilot too

"Being from Florida I can tell you that 6 out of the last 8 cars I owned were AWD. When it rains, the first time you don't drag unevenly through a puddle and lose steering control, you'll know why you paid for the AWD," writes Elain.

"Even on dry roads AWD is worth it. I had a loaner without it while my car was in the service center and I broke traction on a dry road the first time I really hit the accelerator. That never happens with the D," writes Brandon. Overall one of the advantages of all-wheel-drive gives you a good control of the car.

Ivan Jue, who has contributed stories to Torque News, writes that on most other ICE vehicles, AWD is likely not much of a benefit in sunny or warm climates (with the poor fuel mileage and mechanical complexity along with it). But Model S is different. "There's no major complexity, and the additional motor helps add back the range for regen and helps with the tire grip. That's a big deal," he says.

"Dual Motors increases acceleration performance (it's noticeable), and actually increases range because of whatever "torque sleep" does while cruising. There are basically no downsides minus the cost and less front trunk space," writes an S owner named Tyler. Apparently people have said this about the range. But do the published numbers agree? Apparently no.

Overall, if you want a performance car get a Model S D. You'll be pleasantly surprised at the acceleration, handling and sure footedness. But on the other hand, it is little noisier than rear-wheel-drive Teslas and you may want to check your car insurance for the rate difference.

Advantages and Disadvantages of Rear-Wheel-Drive

One person, named Alexei, spoke about the pros and advantages of having a rear-wheel-drive Tesla. "Rear wheel pros: less noise, 5k cheaper, more frunk room. Rear wheel cons: less range, less torque, less grip, less speed," he wrote. If you do long hauls very often the AWD is the way to go. If you are going to invest that much money in Tesla, you may as well want to do the AWD.

Michael wrote on June 15, 2016 - 5:30pm Permalink
I would not own a RWD car anywhere in snow country... at least that's been my rule with gas burners. I can't imagine an electric vehicle being any different.
Armen Hareyan wrote on June 16, 2016 - 7:13pm Permalink
Yes, in a snow you would need a AWD.
Charline wrote on June 10, 2018 - 12:32pm Permalink
Oh my goodness! Awesome article dude! Thank you, However I am going through problems with your RSS. I don't know the reason why I am unable to subscribe to it. Is there anybody else getting similar RSS problems? Anybody who knows the solution can you kindly respond? Thanks!!
JacksonHole wrote on December 14, 2016 - 10:21am Permalink
This is hogwash. The RWD is lighter on the nose which means better ride quality, weight distribution, agility.. Less weight to control up front means more room for softer springs while maintaining the same or better handling. RWD is good in the snow, especially up hill.. The weight transfers to the rear axle when accelerating or going uphill. This car has 52% on the rear axle so traction is not an issue in most of north america. In Montreal the Crown Victorias with winter tires get by better than an AWD SUV with All Season tires.. If you have never driven one in the snow then you have no room to talk negatively about it. I'd say if money is the issue, get the RWD one and use the 4 - 5 grand for other options.. Unless you have to go 0-60 in 2.8 seconds the RWD one is very practical.. Stability and traction control (mandatory in all cars 2012 and newer) will prevent loss of control no matter what layout you choose. Both are very safe because of this. Either way the tires are the most important factor here.. Not AWD vs RWD.
Jeff wrote on July 4, 2017 - 8:58pm Permalink
Thank you for providing a clear and detailed response. I am ready to purchase a Tesla Model S RWD. Since I live in Florida, I felt AWD would not be practical... no snow, no hills, few turns - just rain in the summer. Thank you, J
Evan Finch wrote on June 30, 2018 - 2:09pm Permalink
This article demonstrates that EV buyers still have no car soul. How about: with RWD I can loose that thing up and drift it for hundreds of feet in wet weather? Sliding a car around is like the most enteraining thing you can do as a driver.