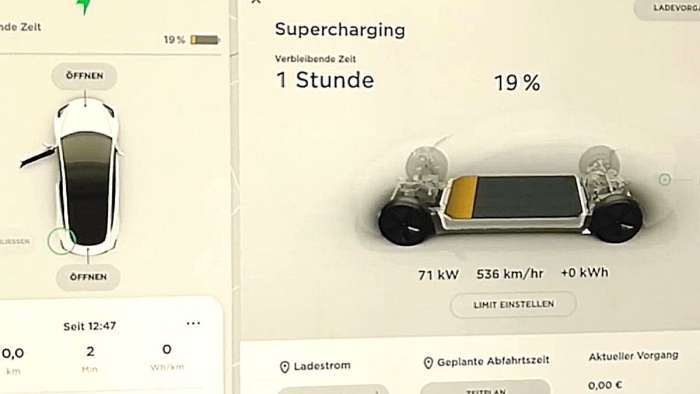 The first Tesla Model 3 vehicles from the Chinese Gigafactory in Shanghai using LFP batteries have now reached customers in Germany, and owners are complaining of range and charging problems related to cold weather.
Advertisement

Some observers are still hoping for a software update that will bring improvement to the MIC Model 3s with cheaper LFP batteries, but after the first impressions it looks like Tesla may have taken a big step in the wrong direction with a revived battery technology. Since October the smallest version of the Model 3 has been standard range plus (SR +) with a battery made from cheaper LFP cells . "The lithium iron phosphate battery or LFP battery, is a type of lithium-ion battery using LiFePO as the cathode material, and a graphitic carbon electrode with a metallic backing as the anode. The energy density of LiFePO ₄ is lower than that of lithium cobalt oxide chemistry, and also has a lower operating voltage," Wikipedia explains.

According to Tesla CEO Elon Musk, these batteries are now good enough with a few extras even for some Teslas "if your drivetrain is very efficient and you add a little manga."

Acceptable, if your drivetrain is very efficient & you add a little manga

But, the Model 3 SR + from China is also being exported to Europe - and an initial test in Germany has now confirmed that charging performance is poor compared to before. The first vehicles with this type of battery have already reached Germany. However, the first buyers in China who are disappointed with the battery performance are now speaking out. Did Tesla run into problems with a snapshot?

In November, Tesla enthusiasts around the world were rejoicing seeing ships loaded with MIC Model 3 vehicles sailing to address the Tesla demand in the European continent. We knew in July 2017 that CATL was readying to ship LFP batteries for Tesla China Model 3s. Now, however, there are reports from China that are likely to put a damper on the joy of the revised Model 3: According to the Chinese electric car portal d1ev.com, more and more users are complaining about the insufficient range and charging power with the new LFP batteries.

According to this, several owners noticed problems with the LFP battery after receiving their Model 3. In winter conditions, the range is significantly limited and the battery cannot be charged 100 percent.

For example, a reader from Beijing who owns the Model 3 with the LFP battery reports that a range of 420 kilometers was displayed after the full charge, but only 5 percent charge was left after a distance of 214 kilometers. After the driver has charged 52 kWh for an hour, the display shows 420 kilometers again. The owner says he uses his car for short journeys, parks it in an underground car park at night and in a parking lot during the day.

A Tesla dealer also admitted that one of his customers got quite angry with him after buying one of the new Model 3s with an LFP battery. The buyer asked the dealer to swap in the vehicle and get him a Model 3 with the old cell chemistry instead.

As d1ev.com further reports, even this so far low number of experience reports is currently causing many interested parties to look specifically for vehicles of the Model 3 Standard Range or Model 3 Long Range type that was still manufactured with the old cell chemistry. However, now we are receiving a similar report of the same problem from Germany as well.

But before I go any further, let me tell you a little about the quality at Tesla Giga Shanghai.

Several factors make the electric cars from China interesting, which have been offered on Tesla's European websites for a few weeks now. Thanks to the cheaper LFP cells (and to compensate for the higher weight), this Model 3 has a slightly larger battery, which means 10 kilometers more WLTP range. In addition, according to Tesla, this battery can and should be regularly charged to 100 percent, so it can be used completely without hesitation. And the Model 3 with the LFP battery are offered at lower prices (in Germany for 3,000 euros less than newly configured ones), also because they have not yet received the refresh from the end of October.

"In addition, the vehicles from the Chinese factory are said to be of far better quality than the American ones," reports TeslaMag. Also, a freelance Tesla expert and YouTuber Ove Kröger from Germany has already reviewed the Model 3 from China and described it as flawless.

But all of this is likely to lose its importance if the first reports of a serious weakness of the Model 3 with LFP batteries are confirmed. As I said, it was first, the Chinese portal d1ev who reported on complaints from new owners in China. The battery can only be charged with significantly less power than the previous one from LG Chem, and it is often not possible to charge it to 100 percent. The real range is far below the specified standard value. According to d1ev.com, one owner also reports that Tesla's superchargers are now more crowded than before because apparently many owners are actually trying to charge their car to 100 percent, which takes considerably more time. The charging speed of the LFP batteries continues to decrease with increasing charge levels, and according to reports, the vehicles can sometimes no longer be charged up to 100 percent.

At least the low charging power of the Tesla Model 3 SR+ from China was confirmed in a first test in Germany over the weekend. The YouTube channel Zero Emission, apparently the new owner of such an electric car, drove it straight to a supercharger - and did not achieve more than 73 kilowatts at its peak, i.e. not even half as much as was possible with the previous Model 3 SR +. After just a few seconds, the output also decreased further to below 60 kilowatts. His battery was preheated during the 70-minute drive to the supercharger, the moderator explains a possible braking factor.

The report from China already mentioned many buyers who do not want to keep their LFP Tesla. On Monday it was said on Twitter that many Danes had ordered a Chinese Model 3 in view of the sharp rise in electric car taxes from 2021 - and were now considering a cancellation. To put this into perspective, a user published a table that comes from a German website and is supposed to show only a slight difference in charging time between the basic Teslas with LFP and the earlier battery. This indicates a peak output of 88 kilowatts for the China model and 110 kilowatts for the US version (but according to earlier reports this can achieve up to 170 kilowatts).

Update:
Here is a comparison I found on a German website. It shows that the US SR+ indeed is faster, but actually not much. Both are charged during winter. pic.twitter.com/eHmolEXblJ

Tesla Should Do More with LFP

So far, there is no reliable and unambiguous method that can identify whether a Model 3 Standard Range vehicle is equipped with LFP batteries or the old cell chemistry. At least the country of origin is sometimes shown on the invoice, but this is not always the case. In addition, the LFP versions would have to have a higher curb weight than the previous standard Range Plus version. However, the official curb weights of the vehicles have varied again and again in the past due to equipment adjustments.

In any case, the problem is not only relevant for the current batch of Model 3 in and from China. Analysts assume that Tesla could help LFP technology with its decision to achieve a renaissance in the West as well. But in such a way, that this doesn't backfire, CEO Elon Musk and his team will probably have to get a little more out of these LFP batteries.

Mark Browning wrote on December 7, 2020 - 1:51pm Permalink
MIC LFP batteries are made by CATL, it might have been wiser to test the LFP chemistry with the increased power the tabless4680 cells.
Armen Hareyan wrote on December 7, 2020 - 7:42pm Permalink
Good point Mark. I can't believe Tesla may have not tested these LFP batteries in cold weather. Or CATL has not tested them in cold weather. If they both have, then what went wrong?
Klaus-Udo wrote on December 7, 2020 - 7:08pm Permalink
in Germany the M3s with the new battery have a different type code in their vehicle registration document.
Armen Hareyan wrote on December 7, 2020 - 7:43pm Permalink
What do you mean by a "different type code" Kalus? Could you please explain a little more in details? Thank you.
Nicolai wrote on December 8, 2020 - 7:00am Permalink
I don't see anything about the driving paterns. Impossible to compare if we don't know how you drove the cars. What speed did you use, was it the exact same temperature outside (or thereabouts), what distance did you cover? Be specific please.
Jean-Pierre White wrote on December 8, 2020 - 4:18pm Permalink
Reduced range in the winter months, even up to 50% is nothing new to tesla or any EV brand. However a slower charging curve is a big deal, other EV's are referred to as suffering from #coldgate when the cold slows down charging speeds. Up until now Tesla have been immune to #coldgate thanks to preconditioning the battery when enroute to a supercharger. I wonder if the new LFP cells need to be hotter to avoid #coldgate? Here's hoping this is a simple OTA fix to the preconditioning algorithms.
Joerg wrote on January 11, 2021 - 8:55am Permalink
Hello Sadly we must confirm these bad news: We bought an M3 SR+ in Germany, which was delivered to us from China in December. We experienced the following issues: After starting with 420 km available distance, after app. 100 km driving a mix of rural roads and highways (at average 100-120 km/h) this was down to 120 km available distance. That was at temperatures of app. 2-3 °C. We had this experience twice. Supercharging was a real pain: We tested 2 different TESLA supercharging stations in Wismar and in Braak/ Hamburg and have never been able to load with more then 25- 30 kW! At both times, the battery was down to app. 30 % before loading and the car started to pre-heat the battery before charging started. Futhermore the car looses up to 5 % battery load per night during parking in a closed garage with tempratus around 10°C. At home that is not an issue but when travelling with no charging overnight available, this is another drawback. We bought the car with the intention to travel regularly distances between 120 - 200 km without intermediate charging and I must admit that we are quite frustrated. We will now contact TESLA Germany and see what they tell us. Regards Jörg