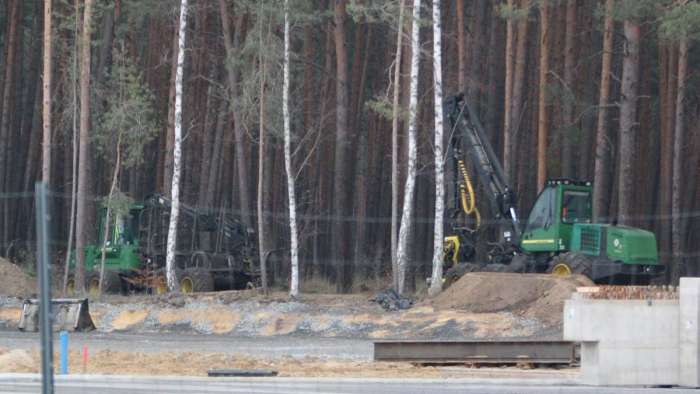 Tesla harvesters began their work. In the next days, 82,8 Ha of industrial pine tree forest will be cleared at Tesla Giga Berlin to prepare the start of the world's largest electric vehicle battery factory.
Advertisement

Yesterday Tesla received a permit to clear about 82 hectares of forest at Giga Berlin for the factory's storage areas and pipeline systems. Many people, who follow Tesla news, assume that this permit is the beginning of Tesla's EV battery factory construction, which Elon Musk announced several days ago.

It took only one day for Tesla to immediately get to work.

Today our friend Jurgen, who tweets at GF4Tesla shared a tweet, showing an image of a Tesla harvester clearing the forest.

The harvesters began with their work. In the next days 82,8Ha of industrial pine tree forest will be cleared at #GigaBerlin. pic.twitter.com/oEYTzHVViY

I am reading the comments under Jurgen's tweet. Some people say it's not a forest, but a pine tree farm. Others say "It's still a forest even if it's cultivated, with some wildlife settled in too. But not in the sense that it'd be some unique nature reserve harboring species that can't be found elsewhere. Price of progress; preserving trees surely wasn't the only factor in the choice of location." That was a comment, written by a user named Veikko Immonen.

In the meantime, as Torque News reported yesterday, environmentalists are taking action against the clearing of another forest area for the planned factory of the US car manufacturer Tesla in Grünheide near Berlin.

"We will lodge an objection in the course of the day and demand immediate access to the files to check the extent to which this decision actually takes into account all nature conservation requirements," said the managing director of the Naturschutzbund (Nabu) Brandenburg, Christiane Schröder, to the Handelsblatt.

Tesla is building in Grünheide, Brandenburg, on the basis of preliminary partial permits. Tesla boss Elon Musk announced last week that he wanted to build the world's largest battery factory in addition to the car factory.

The Brandenburg authority had approved the tree felling work this yesterday. The clearing started this Tuesday morning.

As I mentioned above, according to the State Environment Ministry, the site will be needed "to provide areas for pipelines and storage that will be required for further construction progress". With the clearing, "extensive requirements" for nature and species protection are to be implemented.