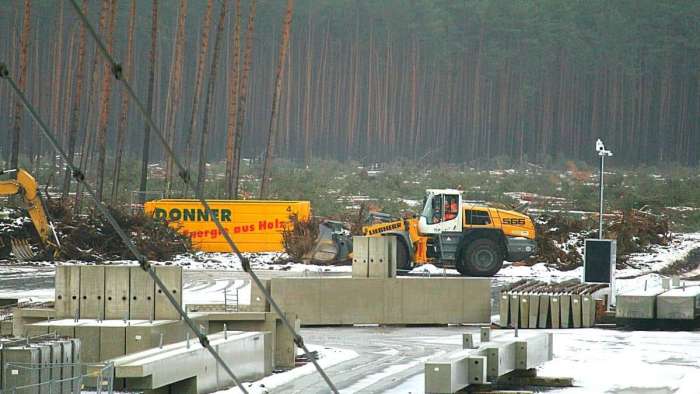 Tesla in Germany gets new permission to build a temporary highway exit for Giga Berlin's construction. However, it is going to be costly.
Advertisement

Tesla is allowed to build a temporary exit from the A10 highway at the Giga Berlin for its electric car plant being built in Grünheide. As the federally-owned Autobahn GmbH, which has been responsible for the planning and construction of motorways since January, informed the RBB on Wednesday, the company has until the end of January, apparently to complete the temporary highway exist for Tesla.

Per this permit, Tesla will need to bear the costs, associated with Giga Berlin's highway exit construction, itself. The news was first broken by the "Märkische Oderzeitung." Florian Zettel from Autobahn GmbH told RBB, which is Brandenburg's Public Radio, "If the weather doesn't spoil the company's plans, construction will be possible to complete before the end of January."

I don't know how much it will cost Tesla to build this temporary and later a permanent highway exit/junction, but these projects are costly. For example, a new highway exit on I95 in Florida is expected to cost $40 million, TCPalm reports. Tesla has a lot of cash, and should have no problem with paying for this highway exit, but it first needs to pay the 100 million euro security deposit, in case Giga Berlin's final permit is not granted for any reason.

The temporary exit is planned in the northwest of the site and includes an exit and an entrance from or to the eastern lane of the A10: i.e. the lane that leads from south to north.

Later, a permanent highway exit junction, including a new state road will replace the temporary one. But that should take several years. It should go faster with a new asphalt surface for the L38 state road south of the Tesla area. The Landesbetrieb Straßenwesen intends to relocate them this year.

As Torque News Youtube has reported previously, in April of 2020 it was already known that Tesla Giga Berlin will have its own highway junction.

This provisional permit is going to help Tesla a lot. The production at Giga Berlin will start in the 3rd quarter. Therefore, this industrial area needs an efficient infrastructure.