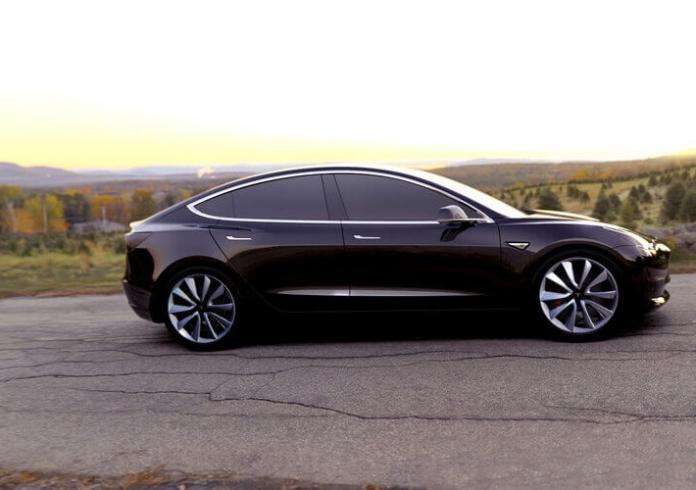 After decades of post-modernization, Tesla Model 3, has finally become a serial production car. The company had set up a private presentation at its Fremont plant and has finalized Model 3's specs and prices. Interestingly, the final version of Model 3 is almost not different from its 2016 prototype. The first 50 cars went to employees.
Advertisement

In front of us we have a sedan, which has the size of Mercedes Class C. The length of the Model 3 is 15.4 feet long. The height is 4"73 inches. The distance between the front and rear wheels is 2875 mm. The body is made of stain and aluminum. And if the Model 3 is a slim modification of the Model S, the interior is original and strangely unique with its simplicity and single screen, which you can see in action here.

Just like as in its prototype the Model 3 is stripped from a conventional dash board that we are used to see in cars. You don't have the common display to which you are used to in other cars. Instead, all the display and dashboard information comes form a central 15-inch screen. For example the speed and other important information, necessary for a driver, are shown on the top left corner of the screen. Infotainment system, navigation, air conditioning and all the other necessary tools are all controlled through the single screen. There is no keyboard. It's all done through touching.

There are no extra buttons on the steering wheel. Instead, you have to joystick buttons under your thumbs of your hands, with the help of which you can control the media system of your Model 3. Under the central display you have two places to charge your phones, which are charged not through wires. This is not yet available in other cars. Ventilation deflectors are tightly masked.

Tesla Model 3 has trick doors with electric locks. The door handles are not like those of the Model S. Instead, here you have keyboards. The door handles are also designed to unlock as the driver walks up to the car, using a low-power bluetooth connection to your phone. With Tesla Model 3's range you want to do everything you can to minimize disruptions to the airflow over the car's body.

Model 3 doesn't have a conventional key. It has a hotel room-like card. you can put it in your valet.

Above the driver's head there is a two-sectional sunroof. The second section is smoothly united with the rear window. In other words, the passengers of the back seat travel like in an aquarium.

Tesla Model 3 One Of The Safest Cars

At last night's presentation Tesla CEO Elon Musk announced that Tesla Model 3 is one of the safest cars in the world. The company even showed a comparison video with Volvo. However, keep in mind that there haven't been any independently verified crash test results.

Taking the safety lead from Volvo, TEsla Model 3 has ultrasonic sensors, cameras and other complex of electronics necessary to assist the driver. Watch a Tesla Model 3 vs. Volvo S60 side-pole impact test

Just like the other Tesla Models Model 3 has two trunks: one in the front and one in the back. Tesla hasn't shown the pictures of its trunk, but Motor Trend has already published some photos, which show that they are neither spacious nor small.

Currently Model 3 is offered as rear wheel drive. The battery is positioned under the floor. The AWD version is expected to be offered next year.

As it was promised, the base Tesla Model 3 is worth more than 35 thousand dollars. This is without any government subsidies. Add to it another 1,200 dollars for delivery. The current version of Tesla Model 3 will trivel 220 miles on a single charge. However, later Tesla will offer a higher top speed and 310 miles on a single charge. The date of this version is not specified.

The company hasn't published data on the engine and power consumption. According to Motor Trend the Model 3 has an electric power equal to 235 hp. It uses e 60 kWh battery.

The first Model 3s for sale will be limited to those powered by a standard battery pack that can provide 220 miles of driving on a single charge.

Tesla will later offer a long-range version of the car that has a higher top speed and a battery range of 310 miles.

For an extra 5,000 dollars you get a Premium Upgrades Package. It comes with the following upgrades.

Enhanced Autopilot costs another extra $5,000. Full self-driving capability costs yet another $3,000, which requires the enhanced Autopilot. The goodies make this car more expensive. Many people may wonder if they should bey Model S instead for that price. Well, almost for that price because recently Tesla discontinued its least expensive Model S production to make a clear distinction between Model 3 and Model S.

It seems to me that the most upscale Tesla Model 3 in the United States will cost $59,500. For comparison, the Model S is rated at least 80 thousand, and the hatchback Chevrolet Bolt, which is the main competitor of the Model 3 on the American market, is offered for 36,620 dollars. The other focus points are BMWs and Nissan Leafs.

The formal sales of Tesla Model 3 have already started. Last night Musk gave the first 50 reservation holders their cars. In reality, those cars went to Tesla employees. Tesla doesn't rush to sell its Model 3s to the public yet because the design, development and intial production was going forward with striking speed. Tesla wants to do few more tests. And EPA numbers of Model 3 will probably come in a month.

In August, there will be only 150 Model 3 sedans, in September - 1500, and in the end of the year the company is planning to invest in the production of 20,000 Model 3s. Next year, it hopes to produce half a million Tesla Model 3s.

Alen wrote on July 29, 2017 - 11:16am Permalink
$9,000 for an extra 90 miles. Wonder what other differences there are? That's going to put the long range version of Tesla Model 3 out of my price range.
David wrote on July 29, 2017 - 11:18am Permalink
By the Time Tesla Model 3 is available for most people tax credits may be gone. This is something that we all need to keep in mind. As the auto industry generally moves to accept electric cars and some countries move to ban ICE cars I don't think there will be any more tax credits for electric cars in the near future.