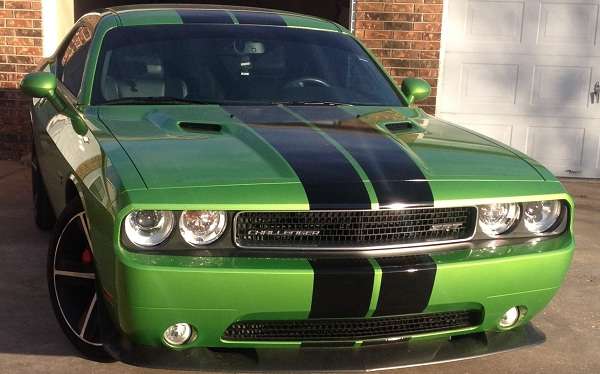 This is a 2011 Dodge Challenger SRT8 6.4L, which is pushing 470 horsepower and 470lb-ft of torque. It's a lot of horsepower for it just being stock and not having a supercharger yet. It is a 392 HEMI.

This Challenger is very special to me because I am paying for it all by myself and it's the baddest muscle car at this time.

What's very unique about my car is the color, which is called Green With Envy (here is another Green With Envy Challenger submitted by another reader of TorqueNews). I believe it's a beautiful color. There aren't many cars with this color around the area where I live.

The car was in practically brand new shape when I bought it. I am the second owner and plan to be the last owner of it.

I originally had a brand new 2012 Charger and it was only a 6 cylinder. Not enough power! My neighbor had a Challenger and seeing his RT every morning convinced me to go trade in which instead of getting the smaller V8 RT I ended up getting the bigger V8 which is referred as the SRT.

I am a 21 year old Hispanic male born and raised in Rogers, Arkansas. Currently, there are no videos of my car, but there will be one within the next week or two of me doing a nice burnout in it.

My Chally doesn't have many mods at the moment since I have only had it for 6 months and I have a daughter to provide for. The only 2 things I have done so far is tint the windows and remove my resonators and added 2 super 44 flowmaster mufflers, which gave it a very aggressive muscle sound! It roars like a dream. Within the next month or two I will add a K&N cold air intake and many more mods in the future.

I am also a local rapper in my town and came up with this phrase which I want to share with you. "It's Mopar or no car, if you ain't drivin one then you drivin' a slow car, cause you know that's me rollin' in the SRT, I'm in that challenger you don't wanna challenge me."