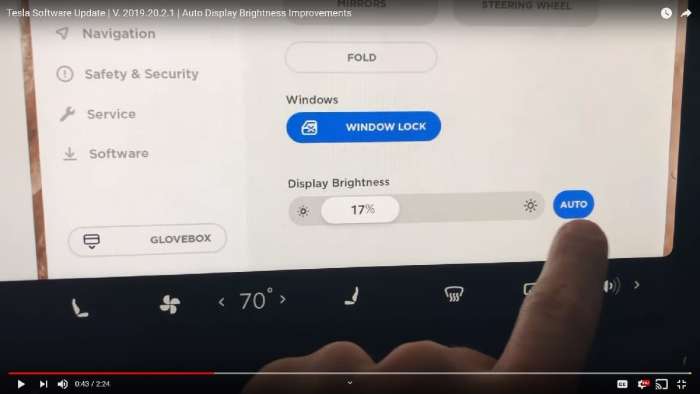 Yesterday on June 19 Tesla released a new software update for Model 3. The V.2019.20.2.1 update has no Enhanced Summon has auto screen brightness improvements. Tesla owners are hoping the next update will include Enhanced Summon. William from All Electric Youtube channel explains what the recent over the air software update entails.
Advertisement

So, it looks like the only thing that we got in this current Tesla Model 3 software update is display brightness. Tesla changed some settings in the display brightness to, I guess, make the automatic display a little bit better.

I didn't think it was that bad, but I guess there was a small improvement that they wanted to make. So, 2019.20.2.1 gets that update, but let's check out that brightness too.

There is an auto button, which I'm not sure if it was already there or not. I think it was (let me know down in the comment section below if you know for sure). I didn't really see a huge improvement. I did take my Tesla Model 3 out for a drive and felt that it really wasn't that big of an improvement as far as the display brightness go and again I didn't think it was a big issue.

The thing I am excited about and I hope is here is what Tesla advertised on the YouTube channel: the Beach Buggy game. You get to race your Tesla using the steering wheel controls.

I saw The Verge post a video on this. Apparently Tesla brought them a car to try out and it looks like this is only for beta testers.

Thus, I just got the newest update and that Beach Buggy 2 is not there.

So it must be for early access or the beta release program only.

I guess they're Tesla engineers are still trying to work out some details or deciding if it's up to snuff for everybody else to get access to.

Now this new menu setting is just my assumption that it's only for early access or beta program testers, but if you guys know for sure let me know in the comments section.

Watch 4 Pictures From Inside Tesla's China Gigafactory 3 in Shanghai and Subscribe to Torque News Youtube channel for Tesla and Automotive News Analysis Daily.