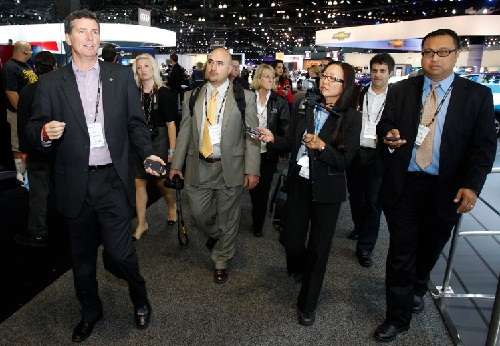 LA Auto Show is one of the largest car shows in the world and the 2011 show is not an exception. Yet, finding cars and favorite brands at the Los Angeles Convention Center is a big challenge if one does not know how to navigate.
Advertisement

The dates, when the 2011 LA Auto Show is open to the public run from November 18 until 27. Note that this includes the long weekend that the nation is expecting to give thanks for the blessings we have. The organizers are expecting big crowds to attend the event as many serious car buyers are seeking to replace their old cars with the economy appearing to rebound. Even the press days that run between the 16th and 17th of November, were very crowded by national, regional and international media representatives covering one of the largest car events in the world in variety of languages.

Navigating through the show may be tough if one does not know where to go. The Convention Center, where the 2011 LA Auto Show is held, is huge. It has three halls, which are at a considerable walking distance from one another. Thankfully, the organizers have put together a nice 2011 Media Guide, which visually helps to nagivate and find visitor's favorite car brands and models inside the Convention Center.

General Motors not only dominates the 2011 Los Angeles Auto show, but also was the leader in number of events held during the press days. It unveiled the new 2013 Cadillac XTS, debuted the Chevy Camaro ZL1 and held a Cadillac lunch detailing its CUE in-car entertainment technology, which will come next spring installed in Cadillac XTS.

When entering the South Hall of the LA Convention Center Audi and Hyundai greet you on with their new E-trone and Azera models displayed prominently. On your left are Audi, Lexus, BMW, Acura and Infiniti. On your right are Hyundai, Smart and Mercedes-Benz. Keep going straight and you will get the main intersection, the center of the action of the auto show. This is where one notices the Grandioure of General Motors.

At the center on the right is Cadillac. Cross the intersection and it's all Chevrolet. Keep going and it's still Chevrolet, with a huge logo sign dominating the view. Turn left and it's Buick. Continue on the left and then comes GMC. Toyota, Acura and Infiniti are at the back of the left side.

Right from the center Mazda, Volvo and Jaguar/Land Rover are comfortably situated with Mazda having the corner area. Scion, Wokswagen, Subaru (see Subaru BRZ STI), Mini and Coda are also on visitor's right hand, all of them having something new to show.

Walk about 10-15 minutes to the West Hall and you will see Ford and Chrysler being prominently positioned in this exhibition hall. On the right side it starts with Lincoln and continues with Ford all the way, taking up more than 40 percent of the West Hall. Pass the intersection and there comes KIA and Mitsubishi Motors at the far back with all electric i-Miev. It's known to be the most affordable electric car in USA.

Enter the West Hall and Honda is on visitor's left side. The main thing here to see is the redesigned CR-V. Nissan is also on the left side, behind Honda. The main thing to see here is the 2013 Nissan GT-R.

Chrysler dominates the upper left corner of the West Hall, occupying 25 percent of the entire hall. Jeep, RAM, Dodge, Chrysler and Fiat brands are all presented here. The new Dodge Charger and the 2012 Fiat 500 are the must-see cars at this exhibition area.

Luxury cars are in Concourse Hall

If anyone wants to see the luxury and sports cars, don't look at them in the above-mentioned to main halls. Luxury cars are separated and shown in the Concourse Hall, which is located between the South and West halls of the Los Angeles Convention Center. Here one can see the new Bentley Continental GTC, an exciting vehicle just introduced globally at Frankfurt in 2011. Bentley is making an official US debut of the car at the LA Auto Show as California is a big market for the company. Lotus, Rolls-Royce, Aston Martin, Mastretta, Morgan and a cool looking DOK-ING are also shown in this hall.

Don't look for Porsche in any of these halls. The German automaker is set aside, occupying the entire Petree Hall. Turn right before entering the West Hall to go to the Petree Hall to see Porsche's exhibits. It occupies nearly as much space as Honda and Nissan together taken. Two cars that one must see here are the 2012 Porsche 911 Carrera S and the new Panamera GTS.

Tickets for the 2011 LA Auto Show are reasonable priced. The price of an adult ticket is 12 dollars. However, one can get a e-tickets much cheaper at 10 dollars. Children, who are 12 and under, are free when accompanied by an adult. Seniors also get a discount. The show organizers also offer group rates at specially discounted prices for purchases of 50 tickets or more. Los Angeles Convention Center, where the 211 auto show takes place, is located at 1201 S. Figueroa Street in downtown LA.

Elon Makes a Cybertruck Statement With an Action, But Quiet in Words
Tesla's Record Month in China: Doubled Registrations in March 2021
END_OF_DOCUMENT_TOKEN_TO_BE_REPLACED