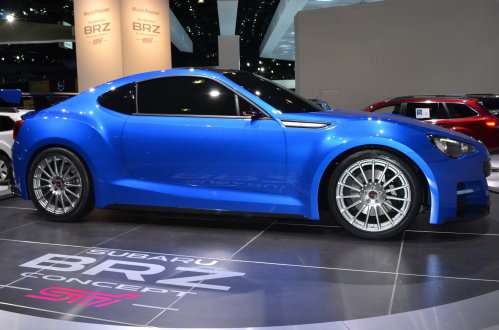 The Subaru BRZ STI debuts at the 2011 LA Auto Show

The 2011 LA Auto Show brought the world the first good look of the high performance BRZ STI, Subaru’s offering from the vehicle family developed jointly with Toyota which will yield both Toyota and Subaru models, as well as a Scion model with the production debut slated for all of them planned for the 2011 Tokyo Motor Show.
Advertisement

Toyota has been showing off their version, named the FT-86 along with the Scion FR-S for a few months now with the most recent stop for the Scion version landing at SEMA but with the opening of the 2011 LA Auto Show, the North American market gets their first good look at the new rear wheel drive Subaru BRZ STI. The Subaru wears a unique front fascia with a flatter nose than the Scion FR-S with rounded headlights helping to give the BRZ its own look. The basic shape of the BRZ STI is pretty much identical to the Scion FR-S and Toyota FT-86 with sharp, angular lines over the front and rear wheels but out back the Subaru wears a large wing, much boxier taillights than the Scion Concept, and 4 large polished exhaust tips in a handsome contrasting splitter.

The Subaru BRZ STI Concept is powered by the same 2.0L Boxer engine and while specifications are still being withheld, we understand that this engine will be naturally aspirated with a bit of Toyota’s direct injection technology helping to improve the output of this Subaru engine. Many speculated the there would be a standard, non-turbocharged BRZ and a second version with the STI badging packing turbos and more power but based on what we see in LA, the BRZ STI may actually be naturally aspirated.

The other surprising aspect of the new Subaru BRZ STI is the rear wheel drive platform that it shares with the Toyota FT-86 and the Scion FR-S. Subaru has become well known for their high performance all wheel drive systems and even though BRZ stands for Boxer engine, Rear wheel drive, Zeta platform it comes as a shock to see a Subaru performance model that only spins two wheels. However, even with a rear wheel drive setup the Subaru BRZ STI is expected to be a serious performer with an extremely low curb weight and a perfect 50/50 weight distribution, it might not be a quarter mile monster but it should be able to handle the best of the world’s turns…or so we are lead to believe.

The STI division of Subaru has added goodies to the new BRZ Concept like a sport tuned suspension, Brembo brakes, and some carbon fiber panels to further cut down the weight and enhance the handling capabilities. It also wears some bright silver 15-spoke, 18” wheels that look very much like something we would see on a production Subaru sports car wrapped in high performance rubber.

One thing to keep in mind is that Toyota and Subaru supposedly have a deal in building this joint boxer-powered rear wheel drive sports car that neither company will reveal any production body panels until all of the models make their production debut later this month at the 2011 Tokyo Motor Show. That could mean that there will be minor appearance tweaks to what we have seen or when the production models of the BRZ, FT-86 and FR-S make their debut they could conceivably look a great deal different than anything that we have seen in the past year.