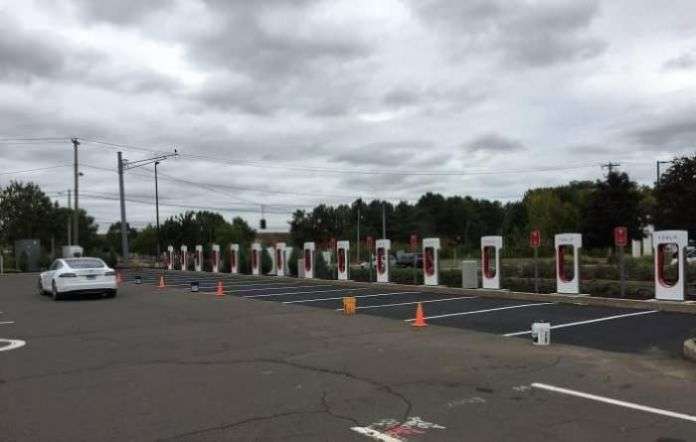 Here Is The Location of Tesla's Largest Supercharger in Europe

Tesla announced that it will build its largest supercharger in Europe in the capital of Norway, Oslo. According to Futurism, Tesla has selected Oslo as the site for the largest Supercharger station in Europe. The 42-stall station will help Tesla achieve its goal of 10,000 Superchargers worldwide by the end of 2017.

Imagine a supercharger that is capable of receiving 42 Tesla vehicles at a time. It will be huge and occupy a large space.

The choice of Oslo is not accidental. Norway, which started the program for the promotion of electric cars in the 1990s, today is one of the world's leaders in the popularity of this type of transport. No wonder one of the most popular Tesla owners group on Facebook is called Tesla Owners Club Norway, which currently has nearly 14,000 members. Most of the members seem to be Tesla Model S owners.

Even in 2013 Tesla was working actively to cover Norwegians with Superchargers. By then the company had covered nearly the 90 percent of the country's needs.

Norwegians love to travel with their Teslas. Take for example this cross European Tesla Model X adventure from Norway to Greece.

Teslas and EVs are very popular in Scandinavia in general. This Finnish taxi driver drove Tesla Model S 250K miles without breakages. Tesla vehicles are growing in popularity in a huge market like Russia. In Russia, there is also a huge increase in demand for Tesla vehicles. According to the analytical agency "Autostat", electric car sales in Russia grew by 92%, reports Life News.

By the way, Tesla is currently building another large supercharger, actually one of the largest superchargers on the East Coast of the United States, opening soon.

If you are a Tesla or EV driver please let us know in the comments section if you are pleased by the availability of superchargers or EV chargers in your area. What needs to be changed or improved. Let's have a constructive discussion on the subject below.

Randy wrote on October 31, 2017 - 12:18pm Permalink
No I'm not happy! I love in South Jersey and there's not a supercharger in the area! Your building lots of them in North Jersey but how about putting one in the Millville Vineland area. There's a huge shopping plaza in Millville and a 1/4 mile away there's the Cumberland mall in Vineland. People from Philly come down every weekend to the Jersey Shore with no where to charge. You'd probably sell a lot more cars and retailers would make out very well if there was a supercharger in one of these 2 locations.
Terry wrote on October 31, 2017 - 12:19pm Permalink
There are not very many near me. The closest one is about 25 miles away in Concord NH. There is one in Boston not far from where I work but that's the one one. Appreantly more coming to Massachusetts in 2018.
David wrote on October 31, 2017 - 12:40pm Permalink
Isn't the primary purpose of the Tesla Supercharger network for road trips, rather than close-to-home / daily charging? If so, why is it important that they are close to where you live?
Terri wrote on November 1, 2017 - 9:43am Permalink
Georgia could definitely use a couple more superchargers for local Tesla owners. The one slated for Madison GA will definitely help. I’d love to see one in Athens GA (shocked there isn’t one there) too. It would make traveling to these areas much less stressful.