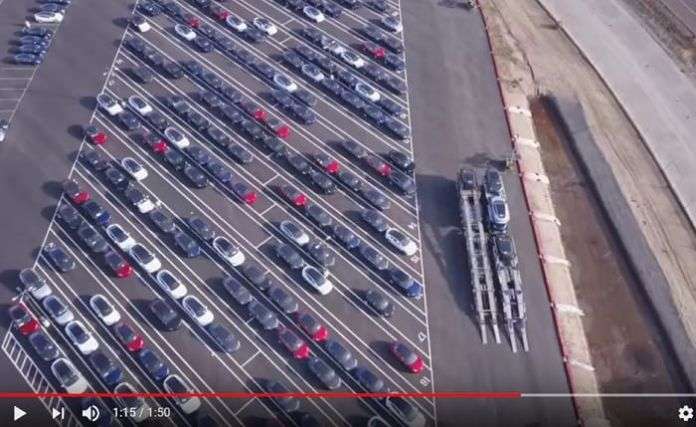 Two days ago Elecktrek published a Youtube video of Tesla factory drone flyover, which is very revealing. It shows the parking lot of Tesla's Fremont factory almost fully filled with Model 3 vehicles ready to be shipped. Some people earlier had suggested that these vehicles sit there because of possible defects, but as you can see in this accompanying screenshot from the video, there is a truckload of Model 3s getting ready to leave the factory.

“I was watching them come and go in waves, you can see them come from the plant to this lot and get unloaded. Another truck would come in and take more off to be delivered to the destination. There are a few Model S and X’s in there but the majority is Model 3’s," Bradley White, who shoot this Tesla Fremont factory drone flyover, told Elecktrek.

See in this video below what White saw while making the drone flyover.

During the first week of January Tesla is expected to announce the 4th quarter car deliveries. Tesla has had a difficult time getting its Model 3 off the factory floor. In the 3rd quarter it only had 222 deliveries of Model 3 and the company acknowledged the hard time it was having with Model 3 deliveries.

As Tesla announces the 4th quarter deliveries the announcement will have a big impact on the stock if the company exceeds or misses the delivery targets.

KeyBanc Capital Markets recently slashed its estimate on Model 3 deliveries in the fourth quarter to 5,000 from 15,000. KeyBanc Capital also lowered its forecast for 2018 to 108,000 from 120,000. But Fred Lambert, the Editor in Chief of Electrek estimates total Model 3 deliveries during the 4th quarter at 1,000 units, "but Tesla could potentially surprise in the last few days of the year with this new evidence of Model 3 vehicles flowing out of the factory," Lambert writes.

How To Know The Exact Model 3 Production Rate

If an automotive blog wants to do some work to know the production rates of Tesla, it could just pay an intern to sit outside the factory and count the car carriers that leave and tally the Model 3 units by color, wheels, etc. "I am sure those numbers would get them some significant web traffic and would be credible week after week. Maybe someone can get a video feed where the units exit and just fast forward through the video every day?" suggests and asks a Reddit user, named gittenlucky. I think that would work if it's legal.

Here is one interesting thing also worth to be noticed in the Fremont factory floyover video. Do you see that some of the vehicles in the parking lot seem to be solar buffered electrocars? What are those for? If you have opinions about this, please share in the comments section below. Does anyone know the exact current production rate of Tesla Model 3 per week?

kent beuchert wrote on December 29, 2017 - 6:29pm Permalink
Nothing of value here - we know Tesla has shipped M3s for quite a while. The numbers are unknown, as Tesla is the most non-transparent auto company on Earth. All the other automakers report monthly sales. You are going to need a ton of trailers to deliever the numbers Tesla is supposed to be delivering One trailer means exactly nothing. There is no reason to assume that many of those cars on the lot don't require defect repairs. Tesla fans are are a case all by themselves.
Leland M Palmer wrote on December 31, 2017 - 3:55am Permalink
Die hard Tesla fan, here. The man has half a million orders for the Model 3. He's not failing. Tesla Motors will be fine. Elon Musk will be fine. His semi truck will take the trucking industry by storm, due to the inherent superiority of regenerative braking being able to recover gravitational potential energy from trucks going downhill.