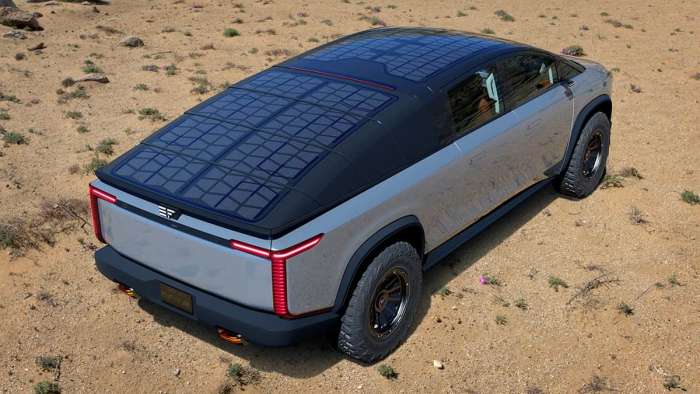 The Chinese electric car start-up Edison Future has two new electric vehicles presented, including an electric pickup EF-1-T, which resembles the Tesla Cybertruck. EF-1T's similarity to Tesla's Cybertruck is striking - including solar cells. Yet, the vehicle has its own character and in my opinion, looks beautiful.
Advertisement

Edisonfuture, the subsidiary of the Chinese energy company SPI Energy, which was founded in 2016, plans to build electric vehicles in the future. Edisonfuture has now presented two upcoming models on its website. The EF-1-T is a pickup that should be available in three expansion stages. Interestingly: the pickup is visually very similar to the eagerly anticipated Tesla Cybertruck, with and optional load compartment cover with solar cells.

Cybertruck clone: ​​from 0 to 60 in under four seconds.

In the standard version of the EF-1-T electric truck, a 476 hp motor is used, which is supposed to accelerate the pick-up to a speed of 60 miles in 6.5 seconds. The EF-1-T can handle just under 3.5 tons. The second expansion stage called EF-1-T Premium gets two engines, the performance of which is not yet known. This means that the truck should only need 4.5 seconds to accelerate to 60 miles per hour. The pulling power increases by a further 330 lb. The premium model, the EF-1-T Super, boasts three engines, is said to have almost 820 hp and go from zero to 60 in just under 4 seconds.

Similarity to the Cybertruck should attract buyers.

The EF-1-T's resemblance to Tesla's Cybertruck is likely to be intended by Edisonfuture. We know that the Tesla Cybertruck may also have its bed covered by solar cells. The EF-1-T can accommodate up to six people in two rows of seats. Even the top cover of the dashboard is paved with solar cells and should bring one or the other volt. 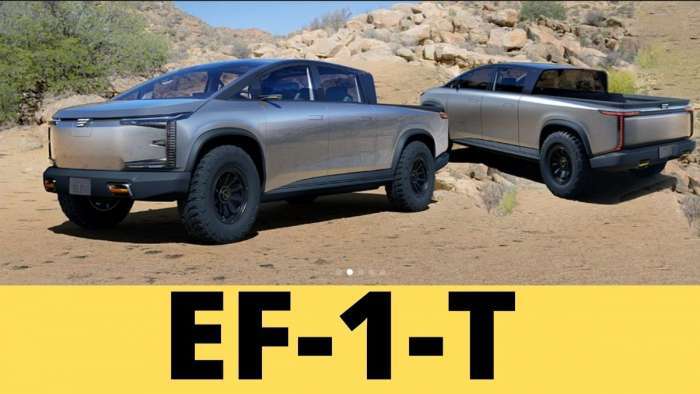 Edisonfuture has come up with a practical idea: the doors accommodate suitcases that can be removed and thus offer storage space to take with you.

Do you like the EF-1-T? Perhaps Tesla should get a few ideals for the Cybertruck based off this truck since the EF-1T is clearly inspired by the Cybertruck. I like a lot of things about this design.

I am very much in favor of putting solar panel on electric vehicles and am glad the Tesla Cybertruck will also have this future as an option. You know, adding 20 miles per day is not small. Also, if these solar panels were churning out 1 gallon of gasoline per day parked in your driveway, imagine the cost of 365 gallons of gas saving per year.

Do you think EF-1-T's design is better than that of the Tesla Cybertruck? Please, leave your comments in the comments section below and let's discuss this electric truck vs the Cybertruck.

Kevin wrote on November 26, 2021 - 3:58am Permalink
It probably doesn't have the body toughness of the Cybertruck, but if it can be close to the range and cost of the Cybertruck, then I would be interested. Although maybe with 4680 batteries the range will improve even more. Unsure if I want a van or a truck. Maybe Canoo is the answer?
Chuck Crist wrote on November 26, 2021 - 7:53pm Permalink
Is there an Edison EV truck even available to view on the road or is it truly just a concept vehicle? Also I didn't see any mention of the projected cost of this truck which is somewhat suspect. Lots of accolades for this vehicle and comparisons to Tesla, but Tesla has a succesful and proven track record for the last 13 years or so , which leads the thinking person to believe it's far superior and much less of a risk to purchase.
Peter N. wrote on November 27, 2021 - 2:22pm Permalink
I can't see that it looks like a Cybertruck. More like a traditional truck except for that the cab is more forward and with a more sloping front window. Very different from a Cybertruck. But it's a good design that gives more usable space and possibly lower drag.
Ben Wisler wrote on November 29, 2021 - 7:09am Permalink
Another "cutie boy " truck? When will someone make a usable Pickup truck with an 8 foot bed for actual truck work?
truckin wrote on November 29, 2021 - 1:31pm Permalink
There is an all-electric work truck in the works... from Bollinger Motors.
Kewzee wrote on November 29, 2021 - 9:24pm Permalink
Since when does anyone looking to do "actual truck work" desire an EV at this time?
Dustin D Hansen wrote on November 30, 2021 - 12:29am Permalink
Why not? Most work trucks are driven in close proximity to work sites.

LG's New EV Battery Plant Is a Welcome News for Tesla
Tesla Giga Berlin's New Hurdle: It's Not Only the Gov't, but Now Tesla Itself
END_OF_DOCUMENT_TOKEN_TO_BE_REPLACED