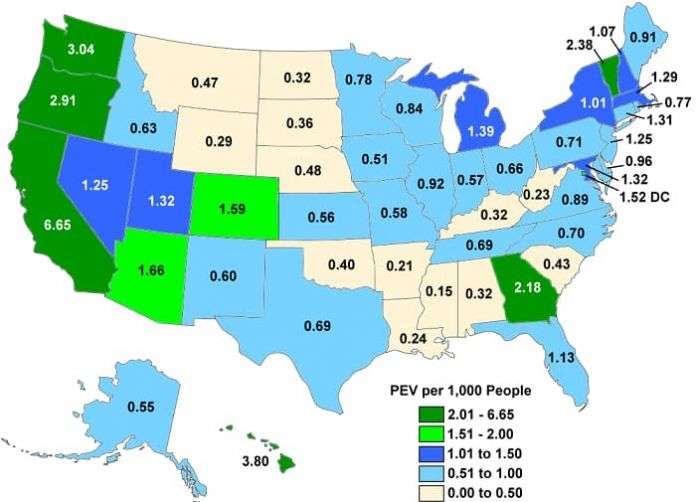 Yesterday the US Department of Energy released the transportation analysis fact of the week in which the state of California had the highest concentration of plug-in electric cars relative to population in 2016. It's a cool map, which makes you want to know more.
Advertisement

Note that 95 percent of California's population lives in urban areas, shows the 2010 census. In fact, the top 4 on this map are all above average for urban population as a percent of total state.

California also has a rebate program for "clean air" vehicles that might effect the results. Administered by CSE for the California Air Resources Board, the Clean Vehicle Rebate Project (CVRP) offers up to $7,000 in electric vehicle rebates.

Levi Weaver from GM Electric Vehicle Owners group on Facebook notes that Texas is interesting because its a very oil dependent state with a very conservative government, but is actually above average at 85% urban. "The issue is, that while I live in an urban area, and my parents also live in an urban area (though much smaller), there is still a nearly 400 mile one drives to visit them... and that's only about halfway across the state," Weaver writes.

"Another interesting case would be NY. Most of the residents of Manhattan do not own vehicles. And for most of the outer boroughs have a lower ownership than other urban areas. So NYC's huge population with low relative ownership is going to skew the whole states numbers. Then couple that with the fact that a lot of the rest of NY is much less dense but actually owns cars, and it would be interesting to see NYC plug-ins vs the rest of the state. It would be interesting to see this map more stratified by county (as that's how registrations are handled) as well as plug in (PHEV or BEV) as a percentage of total vehicle registrations," he adds.

It's also worth noting that California was the site of the first run electric vehicles in the 1990s, we learn from the documentary Who Killed the Electric Car.

I am glad to see Georgia is doing a good job, while my state North Carolina has still a way to go.

Interestingly, if you look at the gas price map of the United States, you will see that in those states with the highest concentration of electric plug-in cars the gas prices are the highest.

Michael Pierz reports from Detroit area in the group. He writes that "standing at a street corner in the Detroit area you would believe the Michigan number was a lot higher. Manufacturers, including suppliers don't get their vehicles counted because manufacturers plates aren't registered by vehicle only as something owned by that particular manufacturer. I have stopped at lights with 6 plug ins and a couple autonomous vehicles waiting for the green light."