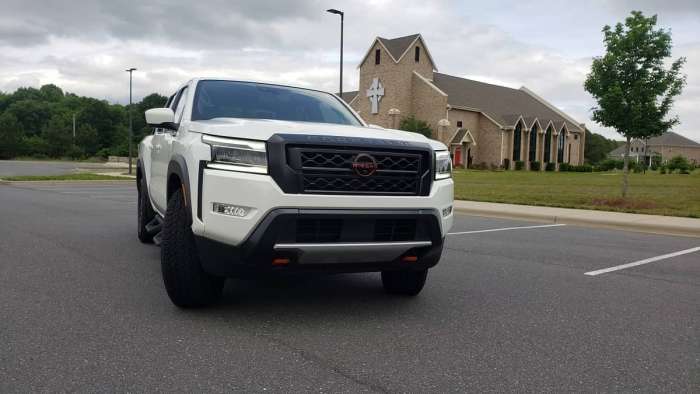 The restyling of the Nissan pickup comes with aesthetic and safety news. The new 2022 Frontier is now much more robust, technological and imposing. In addition, it incorporates two new versions to the range. Let's look at the changes in this review.
Advertisement

The main changes in the 2022 Nissan Frontier are aesthetic. On the outside there is a new nose (bumper, grill and lights), tires and tail, with a redesigned tailgate and a taller box. The Pro-4x version has black finishes , while the Platinum, the next most important, has chrome.

Inside, the update is minimal. The new steering wheel common to other models (much more modern) is adopted for the 2022 Frontier. The central computer of the dashboard gained in size and not much more. The screen has improved, but the commands are the same as before. It is not far behind in the segment, but its age is noticeable. However, I am a conservative man and like things unchanged.

Let's start with Nissan's quick take on the changes of the 2022 Frontier mid-size pickup truck.

As you can see the new 2022 Frontier was totally redesigned, offering a completely imposing and much more mature design. Torque news test-drove the Pro-X Crew Cab trim, which is offered in 4x2 automatic V6.

Powertrain and Fuel Economy of The 2022 Frontier

According to Nissan, the powertrain on this Nissan Frontier Pro-X has also been reconfigured, along with the steering and suspension. This new 2022 Nissan Frontier Pro-X is powered by a direct injection 3.8-Liter V-6 engine that delivers 310 horsepower and 281 pound-feet of torque, as I quoted above.

This engine works in conjunction with a 9-speed automatic transmission. The transmission was designed to maximize efficiency, allowing for better acceleration. In this regard, and according to Nissan, this transmission offers much quicker shift response throughout the gear range. 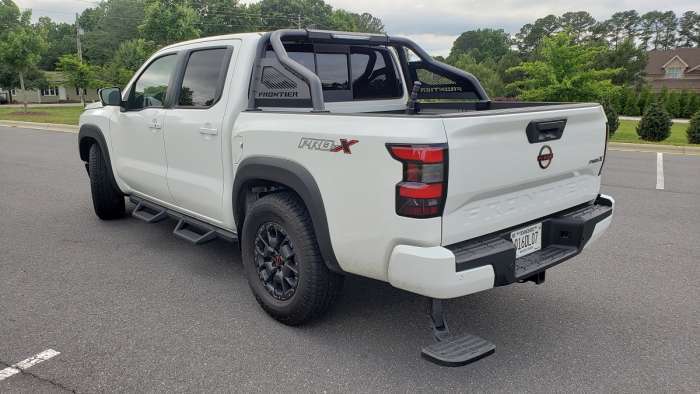 As for the brakes and suspension, it has disc brakes on all four wheels, Blistein Off-Road shock absorbers and a stabilizer on the rear suspension.

Exterior Styling of the 2022 Frontier

Inspired by the original 1980s Nissan Hardbody pickup, the new 2022 Frontier has an aggressive, modern look with a bolder front end, prominent grille and chiseled hood. The high sidewalls are intentional, to give the impression of thickness and strength. Viewed from the side, high shoulders are visible, adding to the durable look this 2022 Nissan Frontier Pro-X offers.

Prominent Frontier lettering appears on the grille and tailgate, while wide tires help give Nissan's new pickup a planted stance. The black grille of the 2022 Frontier Pro-4X model is particularly sharp and the rear of the new Frontier has a machined structural look.

That if, as you can see in the images, do not expect a large cargo bed, on the contrary, this Nissan Frontier Pro X has a short cargo bed.

The rear fenders, like the front fenders and feature black plastic, added to other black accents around this truck, give it a special appeal.

Thanks to the optional Pro Convenience Package, the cargo bed of the 2022 Nissan Frontier Pro-X includes an aluminum sports bar with LED lights to illuminate the bed, with side plates with the word Frontier on the bottom of it. 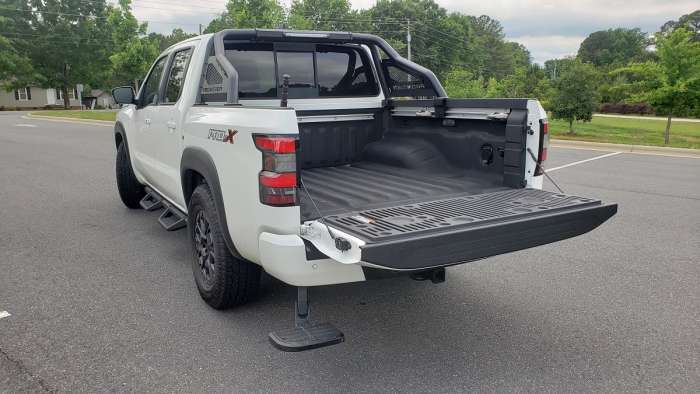 For more comfort for the driver and passengers, this Frontier Pro X includes 4 steps to get on and off more comfortably and a step under the cargo bed, in the left corner, which opens by simply stepping on it and closes by pushing it with your foot.

Interior of the 2022 Nissan Frontier

The interior of the 2022 Nissan Frontier was also completely redesigned and one of the things that is very striking, despite being a mid-size truck, is the ample interior space and its Zero Gravity front seats, great and very comfortable.

This does not mean that the rear seats are not comfortable, on the contrary, they are comfortable and the space for the legs of the passengers is also very ample, even for those of a large frame and for whom long trips will not cause problems. 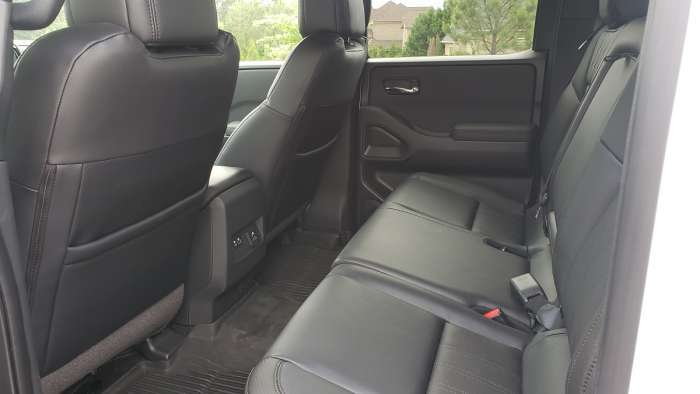 All seats are upholstered in leather with red stitching and this is made possible by the optional Pro Premium feature package. 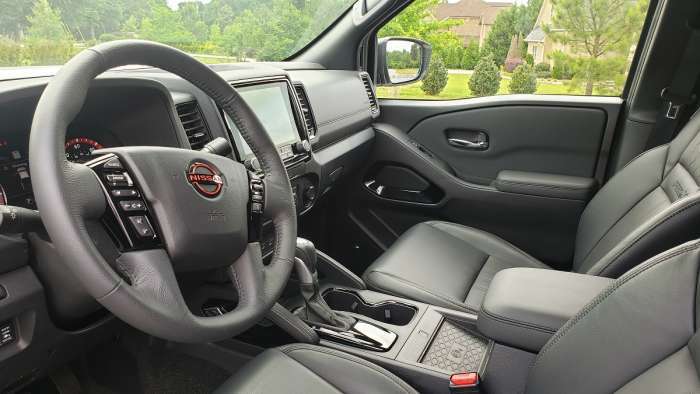 The entertainment system is the NissanConnect with Nissan Door to Door navigation system and its 9-inch main screen is a color touch screen. 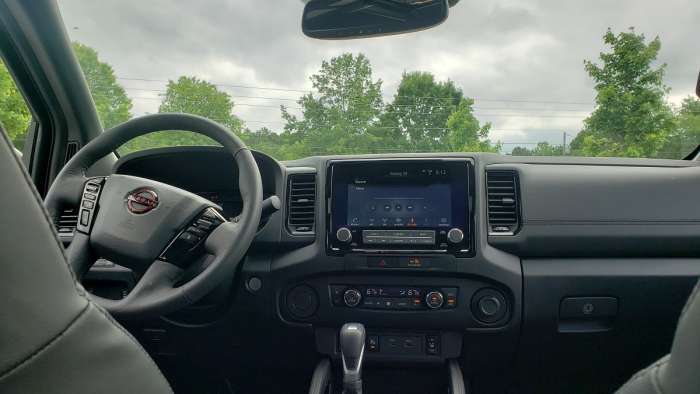 As for the audio system, with the Pro Premium package, this 2022 Nissan Frontier Pro X includes a Fender Premium audio system, which works with 10 speakers, offering spectacular sound.

The optional features package also includes two 120V outlets, one in the cargo bed and one in the rear of the center console.

Other important features in terms of interior technology are the wireless charger for smartphones and the rearview mirror, which has a screen that shows what was captured with one of the rear cameras.

The 2022 Nissan Frontier's 3.8-litre V6 (310 hp and 281 lb-ft of torque) has the best power in its class. It mates to a 9-speed automatic transmission which is a huge improvement over the previous 5-speed version.

This combination of powertrains makes the Frontier extremely capable. Whether on-road or off-road, the Frontier has the guts to get out of a sticky situation. Climbing steep terrain in the Pro-4X is easier with the added power. 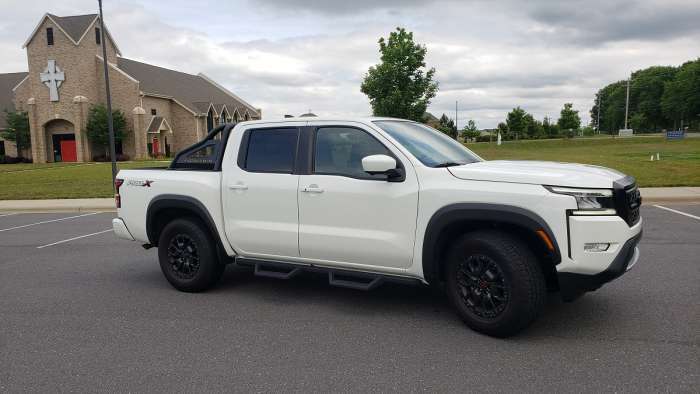 Thanks to a reworked suspension, the comfort of the Nissan Frontier's ride quality far exceeds that of the previous model, but some of the Frontier's fiercest competitors.

Nissan is also returning to hydraulic steering here. This gives the steering a good amount of weight and greatly decreases the driver's need for constant correction.

Nissan's Zero Gravity Seats make the ride in the cabin enjoyable, especially on long trips. They are also much more adjustable than those of the previous model. A negative point, the steering wheel has no telescopic capacity.

Maximum payload (1,610 pounds) and towing capacities (6,720 pounds) have both increased.

More than 41 new parts have been added to reduce road, engine and wind noise in the cabin. The effort proves effective, as the ride doesn't become noisy and truck-like, even at high speeds on the highway.

Driving the 2022 Nissan Frontier for a week for this review only confirmed and improved my first impression of this midsize truck that outperforms its previous model in every way.

The 2022 Nissan Frontier Pro X Crew Cab is definitely one of the best in its segment and of course an option that will be difficult to say no to when deciding to purchase.